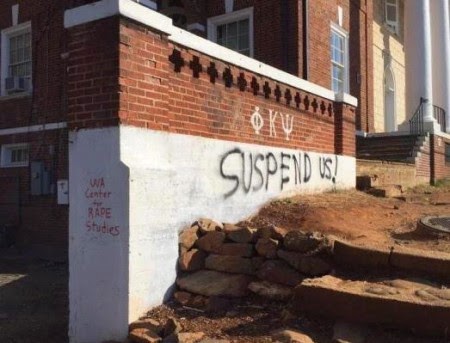 As the shocking allegations of a fraternity party gang rape at the University of Virginia come unraveled, progressives whose cause is to condemn America for a so-called “rape culture” have chosen to double down in defense of the apparent falsehood. The Washington Post even ran an astoundingly un-American piece that suggests we should believe rape accusations, regardless of whether they are true.

Rolling Stone, the music and politics magazine that can stay relevant only by sexualizing everyone (including terrorists – remember its dreamy cover photo of Boston bomber Dzhokhar Tsarnaev?), broke the lurid story only to have it fall apart thanks to unconscionably sloppy journalism. But progressives cannot let the truth get in the way of the agenda, so Zerlina Maxwell rushed to fill the breach with the aforementioned WaPo piece initially entitled “No matter what Jackie said, we should automatically believe rape claims” (“Jackie” is the victim’s pseudonym).

The thrust of Maxwell’s piece is that “the costs of wrongly disbelieving a survivor far outweigh the costs of calling someone a rapist.” She begins by saying that many people

will be tempted to see [the collapse of the UofV gang-rape allegation] as a reminder that officials, reporters and the general public should hear both sides of the story and collect all the evidence before coming to a conclusion in rape cases. This is what we mean in America when we say someone is “innocent until proven guilty.” After all, look what happened to the Duke lacrosse players.

Exactly – look at what happened to them. But then she goes on to reject that reasonable restraint: “In important ways,” she wrote, “this is wrong. We should believe, as a matter of default, what an accuser says” [emphasis added] – after all, false accusations are “exceedingly rare,” she claims. But then she quotes an FBI statistic that 2-8% of allegations are false; that is not “exceedingly rare.”

In any case, it wouldn’t matter if the figure were only 1% - in this country we don’t suspend the presumption of innocence just “to offer our hand of support to survivors.” Maxwell disagrees: “The time we spend picking apart a traumatized survivor’s narration on the hunt for discrepancies is time that should be spent punishing serial rapists.”

It should go without saying, especially to someone with a law degree like Maxwell, that we shouldn’t be “punishing serial rapists” if they haven’t yet been proven to be serial rapists. She has created a false choice between believing and disbelieving the accused. It is not the job of law enforcement to believe or disbelieve a victim’s story; it is their job to determine if a crime has been committed, to investigate it, to examine the evidence, and then to act accordingly. Maxwell wants to reverse that process; too bad if the accusation falls apart under later scrutiny.

And what of the man she’s willing to falsely if temporarily accuse of the ugly crime of rape? Well, he would have “a rough period” for the duration of the investigation, Maxwell generously concedes. For example, he might lose some Facebook friends – yes, she actually wrote that. But when his name is cleared everything will return to normal. Certainly no one would suggest that a real rape victim’s trauma is not significant, but Maxwell is willfully ignoring the damage done to a man falsely smeared as a sexual predator.

Her op-ed was so stunningly and self-evidently wrong that it incurred a wave of Twitter wrath and negative comments, resulting in either Maxwell or the WaPo editors backing off and replacing “automatically” in the headline with “generally,” which is little improvement.

“Democratic strategist” Maxwell is of the school of thought, and I use that word loosely, that we live in a rape culture and if only we taught men not to rape, then women would be relieved of the burden of having to protect themselves from it (“strategist,” by the way, is the title given to someone has no official authority or function except to serve as a media mouthpiece for talking points).

Rape culture is the theory that sexual assault becomes normalized when a culture condones the objectification and trivialization of women. Radical feminists have managed to push the term to the forefront of our conversations about the sexes today, promoting the ugly notion that all men are literal or latent rapists who need to be deprogrammed out of their acculturated misogyny.

As I’ve written before for FrontPage, America doesn’t have a rape culture any more than we have a murder culture. We have a culture that considers both to be heinous violent crimes. We have a culture so unforgiving of rape that even false accusations of it ruin men’s lives. We don’t “teach” men to rape, and the vast majority of American males would never even consider such a depraved act.

According to 2013 Bureau of Justice statistics, the estimated annual rate of female rape or sexual assault victimizations in this country declined 58% from 1995 to 2010. To cite this is absolutely not to trivialize the terrible violation that is rape; it is not to suggest that anything more than zero sexual assaults is acceptable; and it is not to encourage complacency. It is only to emphasize that not only are we not enmeshed in a rape culture, but things seem to be improving significantly.

However, there are violent deviants who will and do rape, and the world will never rid itself of that evil minority. That’s just reality, but it’s not the utopian reality that progressives insist upon. To believe that we can simply teach that rape is unconscionable – which we already do – and that the crime will then disappear is a childish and useless utopian fantasy.

When a pregnant teenager in the Sudan faces death by stoning for being gang-raped, that is a rape culture. But a privileged Western woman like Zerlina Maxwell is insanely focused on smearing innocent men in order to peddle the myth that American culture is little better.