Created Equal: Clarence Thomas in His Own Words 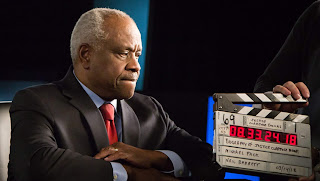 Before there was Brett Kavanaugh, there was Clarence Thomas. Many who watched or participated in the grotesque circus that was the Kavanaugh Supreme Court confirmation hearings no doubt were unaware of, or had forgotten, the ugly spectacle that was Thomas’ confirmation hearings in 1991. As a black conservative, Thomas drew (and continues to draw) the vicious wrath of racist Democrats who reserve a special enmity for minorities that dare stray from the leftist plantation. Then as now, the Democrats waged their politics of personal destruction, and then as now a good man with impeccable legal credentials was demonized by an uncorroborated allegation of sexual harassment shored up by the full force of the leftist smear machine.
A riveting new documentary revisits the Clarence Thomas-Anita Hill controversy as part of a look at the Supreme Court Justice’s amazing life journey. Created Equal: Clarence Thomas in His Own Words, produced by Michael Pack of Manifold Productions, aired earlier this week on PBS, of all places, and is still available here for free through June 2. Don’t miss it. The producers interviewed Thomas and his wife Virginia for over 30 hours about his life, the law, and his legacy. As the movie’s website states,

the documentary proceeds chronologically, combining Justice Thomas’ first person account with a rich array of historical archive material, period and original music, personal photos, and evocative recreations. Unscripted and without narration, the documentary takes the viewer through this complex and often painful life, dealing with race, faith, power, jurisprudence, and personal resilience.
In his rich, sonorous voice, Thomas, the second black American to serve on the Court and, at 28 years, the longest-serving Justice, tells his life story beginning with his birth in tiny Pin Point, Georgia in 1948. Descended from West African slaves and born into rock-bottom poverty, Thomas later was raised by his grandparents in Savannah. His stern grandfather, “the greatest man I have ever known,” believed firmly in hard work and even more firmly in the education he never had, the lack of which he blamed for his inability to rise above his station in life. He impressed upon his grandchildren the importance of committing themselves to school. He told Thomas and his brother that they would go every day, even when sick, and even if they were dead he would take their bodies to school for three more days “to make sure we weren’t faking.”
Read more »
at 8:05:00 PM

'Mrs. America': Phyllis Schlafly and the Battle to Stop the ERA 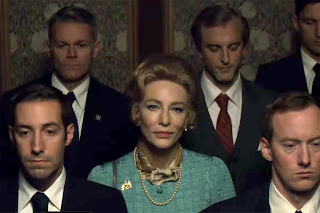 In November of 1983 I attended a highly-anticipated debate at San Francisco State University called “Two Views on Women” between Phyllis Schlafly, the conservative icon who had famously spearheaded the scuttling of the Equal Rights Amendment (ERA) in the 1970s, and Dierdre English, a Mother Jones editor and feminist who stood in complete opposition to everything Schlafly stood for. I was a Democrat at the time, and thus went into the debate rather mindlessly expecting to side with English. I was not in the minority; most of the two thousand or so attendees that evening were rooting for English, as might be expected considering the venue.
But even as a Democrat, I was put off by the fact that throughout the debate, English resorted to sarcasm and personal attacks instead of reasoned argument, while the unflappable Schlafly not only never took the bait, she also skillfully defended the traditional roles of mother and housewife with arguments English either wouldn’t or couldn’t refute (in retrospect, this contrast should have clued me in to a stark difference between the left and the right in general, but regrettably, my political epiphany wouldn’t happen for many more years). I remember feeling so frustrated with English’s tactics that at one point I hissed out loud, “She’s blowing it” – which earned me a nasty look from the female student and English-supporter in front of me.
This scenario similarly played out over and over again in Schlafly’s skirmishes with feminist proponents of the ERA in the previous decade. The National Review recently decried a “shoddy attack” against Schlafly, who died in 2016, in the Washington Post by NeverTrump blowhard Max Boot, who identified her as a key factor in “the origins of our current madness,” claiming she “pioneered the kind of incendiary, irrational rhetoric” that ultimately led to the ascendance of Donald Trump. But if you’ve ever seen Schlafly in the media, or watched any videos of her many TV appearances, you know that, far from employing incendiary, irrational rhetoric, she could be forceful but was unfailingly cool, calm, collected, reasoned, articulate, and never sank to ad hominem – or more precisely, ad feminam – attacks, in contrast to the kind of incendiary, irrational rhetoric regularly used by her radical opponents like Diedre English.
This comes up because the FX network and Hulu streaming service have combined in the recent release of a nine-episode series about the battle to pass the Equal Rights Amendment called Mrs. America. The show is an ensemble piece which devotes more time to the bevy of feminist characters than one might expect, considering the title and the fact that Oscar-winning actress Cate Blanchett is the centerpiece as Schlafly, who is depicted as an anti-heroine. Reviewers have missed no opportunity to praise Blanchett’s “complex” characterization and to demonize the real-life Schlafly. The Loud and Clear review describes Mrs. America as “the story of Second Wave Feminism in America [told] from the side of the villain.” Slant Magazine states that “Schlafly resembles Trump in her truth-flexing fearmongering,” and in another sideswipe at President Trump, a reviewer at RogerEbert.com claims that “few, if any, of her arguments are based in fact. This leads the ‘libbers’ [in the show] to write her off as a quack, dismissive of the massive power of her lies, conspiracy theories, and nightmare scenarios. (Sound familiar?).”
Read more »
at 12:04:00 AM