Victoria’s Secret is Sexy, not Sexist 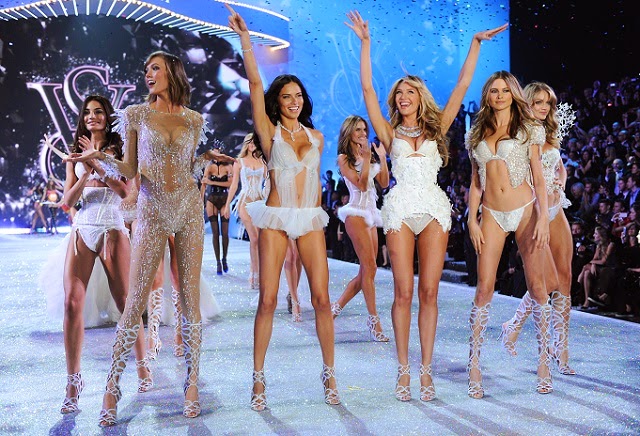 It’s that time of year again. Christmas, yes, but I’m referring to the annual Victoria’s Secret Fashion Show, which won’t air until December 9 but is already being greeted by the predictable tut-tutting from those who wrongly conflate “sexy” with “sexist.”

The extravagant show was actually staged last Tuesday in London. Irked by the “tawdry caravan” of lean-limbed, wild-maned, high-heeled, spray-tanned Victoria’s Secret Angels, the UK Daily Mail’s Sarah Vine lit into the dazzling celebration of genetic perfection, asking, “How did 50 years of feminism end in this?”

But it’s not successful because of teenage boys; it’s not successful even because of men, since men generally don’t buy lingerie for their partners. Victoria’s Secret raked in $6.6 billion in 2013 and controls 35% of America’s lingerie market because women want to feel sexy and desirable, because pretty lingerie helps them feel that way, and because VS works that angle spectacularly well. Even the models are chosen, according to VS, to appeal to its female customers, not to men.

This is precisely what disturbs Vine – that VS has convinced women that they are wearing its products because they want to, not because “they are expected to.” This doesn’t give VS’ customers much credit for making up their own minds. But Vine and many others like her are further troubled by what they see as the objectification of women by Victoria’s Secret, which is “a world where how you look doesn’t just matter; it’s the only thing that matters”:

No other quality is required. Forget kindness or intelligence: can you or can you not get into this see-through lace body? And if not, why not? A degree in astrophysics? Don’t be ridiculous, woman. What you need is a rhinestone thong… It makes a mockery of everything that modern women stand for — and invites us to be complicit in our downfall.

That is really going too far. VS sells lingerie, so naturally the focus is on the female body and on sexiness. Objectors like Vine who take such umbrage at VS are confusing sexy with sexist. Sexiness is not oppression or even objectification. It and other qualities like kindness or intelligence are not mutually exclusive; in fact, more often than not, sexiness blooms out of a woman’s other qualities, and the lingerie is just the icing on the cake. Is Vine saying that a woman who indulges her sexy side with a rhinestone thong can’t also be kind and intelligent? Victoria’s Secret may be about seduction, but it is not seducing women away from pursuing that degree in astrophysics.

As for Vine’s accusation that VS’ models promote an idealized standard for women’s bodies: of course they do. The models who look fabulous on the runway and in the famous VS catalog serve as inspiration for women who want to envision their idealized selves in sexy undies. If VS marched a parade of frumps down the runway instead, the show wouldn’t capture 9.3 million viewers, and women would look elsewhere for attractive lingerie.

I do grant one point of Vine’s argument. She notes that Victoria’s Secret’s parent company L Brands recently launched Pink, “aimed fairly and squarely at the teen market.” She worries that there is “a real danger” of the younger generation being sexualized before their time. As the father of two little girls, I too have my concerns about age-appropriateness and think VS should be careful about grooming girls to become customers too young.

Despite all the skin on titillating display, the annual Victoria’s Secret Fashion Show that Sarah Vine derides as “trashy costumes, echoes of strippers and sleazy nightclubs, nudity and downright lecherousness” is not quite as Bacchanalian as all that. It’s simply a fun, glitzy, and yes, sexy pop culture event. The show doesn’t crudely demean or limit women; it simply celebrates their sexiness. Even astrophysicists don’t want to be cerebral all the time.