A Wake Up Call from The Rock 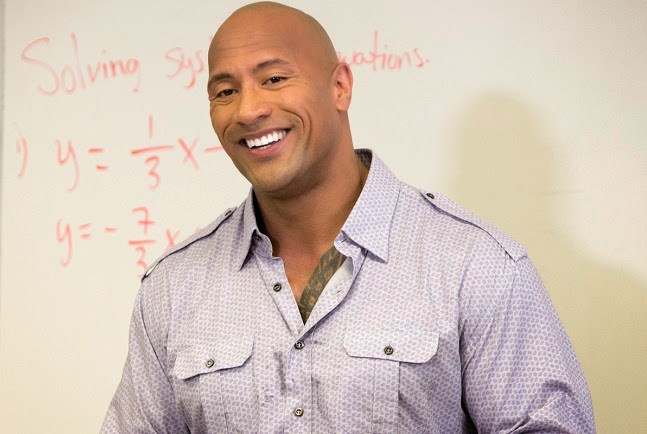 Reality television – with its manufactured melodrama, Machiavellian alliances, needy narcissism, and drunken hookups – rewards bad behavior with money and fame (or rather, infamy, which too many people now see as no different from fame and perhaps even better). So it’s refreshing when a reality show comes along that focuses on steering people away from bad attitudes and self-destructive habits toward self-dignity and commitment to their dreams. It’s also refreshing to see a show hosted by someone as fun to watch as The Rock.

Premiering last Friday night on TNT was Wake Up Call, hosted by Dwayne “The Rock” Johnson, who plays a sort of life coach to a variety of “ordinary” people in need of turning their lives around. Johnson, 42, has been there and knows the discipline and commitment necessary to make oneself successful. After playing on a championship college football team, he drifted afterward and was arrested multiple times, ending up living at home with no direction, no money, no future. But he committed to making something of himself, and it paid off wildly: he became one of the greatest – and most beloved – pro wrestlers of all time and a movie star as well.

Now “Rock is returning to his roots,” says the Wake Up Call synopsis, “to help those who are struggling and to show them that there can be a better way”:

From dysfunctional homes and deadbeat dads to runaway teens and businesses struggling to survive, The Rock descends into the chaos of everyday problems to pull good people up by the bootstraps, reminding them what hard work, passion and true discipline can accomplish.

In the premiere, Johnson helps a teenager get a shot at his dream of becoming a Mixed Martial Arts fighter – but not unless he makes school his priority and makes an attitude adjustment. In the episode this coming Friday, Johnson rescues a selfless Florida high school coach named Javier from ignoring his own serious obesity. Future episodes this first season will feature The Rock helping a family pizzeria in trouble, a high school dropout, a former NBA star who is at a personal crossroads, and even a dad who dreams of being a rapper.

Yes, there are the expected maudlin, heart-tugging moments, but at least they stem honestly and spontaneously from real people responding to Rock’s genuine tough love. And cutting through all the sentimentality is Johnson’s unusual combination of star power and down-to-earth likeability that elevates Wake Up Call above the reality show pack. He brings a sincere concern, a relaxed air, and a perfect comic timing to the show.

For example, when he tells the obese Javier that they’re going to climb that hill to success together, even if he has to carry him, Johnson jokes, “I sure as hell hope I don’t have to, because this show’s called Wake Up Call, not The Rock Gets a Hernia.” When he makes Javier sprint down the school hallway, Johnson urges him on by comparing him favorably to the world’s fastest human: “You’re just like Usain Bolt!” Beat. “Only slightly chubbier.”

The show falters whenever Johnson temporarily passes the baton to other experts to take over. In the upcoming episode, for example, personal trainer Jillian Michaels – a well-known TV fixture from shows like The Biggest Loser – is brought in to put Coach Javier through the paces and to get to the bottom of his psychological issues. As effective as she may be at what she does, she simply lacks Johnson’s charisma and genuineness.

I’ve met Dwayne Johnson and his ex-wife Dany Garcia, who is his production partner on Wake Up Call, among other projects. He’s as approachable and humble as he seems on camera, and that’s what has made him a star. Johnson is the perfect host to challenge and encourage real people, with whom the audience can identify and whom they can root for, to haul themselves out of the kinds of ruts we dig for ourselves and to move forward toward more fulfilling lives. Wake Up Call may be a simple, low-key, low-budget reality show, but it offers more inspiration and uplifting entertainment than merely keeping up with Kardashians.