A Taste of Islam: An Interview with Bill Warner 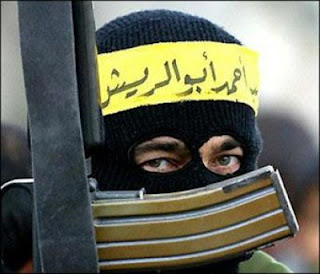 In the years after the 9/11 attacks, more non-Muslims than ever before have undertaken to learn about Islam to understand the religious motives of those who had declared war on us. And yet non-believers who are alarmed at what they have found in the foundational texts of Islam are always told by apologists that we don’t understand the true Koran, that we labor under misconceptions about the Religion of Peace, that we don’t understand the complexities of sharia, that our objections and criticisms stem from racism (even though Islam is not a race) and an irrational fear of Islam and its adherents. The problem always seems to lie with us. What is the truth and how can we get to it behind the contradictions and the mystification?

Bill Warner has the answer. The founder and director of the Center for the Study of Political Islam (CSPI), he holds a PhD in physics and math. He has been a university professor, a businessman, and an applied physicist. But Dr. Warner has also had a lifelong interest in religion and its impact on history, and so the day after 9/11 he decided to make the source texts of Islam available for the average person who wants to know more.

As part of that effort, Mr. Warner has produced a dozen books, including a Koran, a biography of Mohammed and a summary of the political traditions of Mohammed. He writes articles and produces news bulletins that record the suffering of the victims of political Islam. And he has spoken nationally and internationally about Islamic political doctrine.
This Tuesday in Los Angeles, Mr. Warner will present “A Taste of Islam.” See here for information about attending.
Mark Tapson:         Mr. Warner, your background is in physics and mathematics. How did you come to devote yourself to the study of religion and to feel compelled to share your insights on political Islam? How did the field of statistics shape your perspective on Islam?
Read more »
at 9:00:00 AM 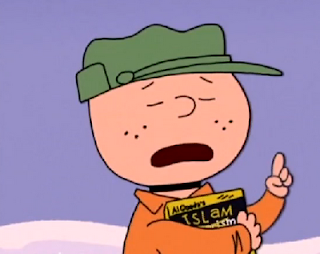 Over the Christmas holiday, comedian Denis Leary – known for rapid-fire, politically incorrect standup rants – revived a several-years-old three-minute video from his production company by linking to it on the social network Twitter. The animated video, called “Merry F***ing Christmas,” is a parody of the long-running, annual Christmas special featuring Charlie Brown and his “Peanuts” gang.  In the course of it, Leary makes a couple of jokes at Christianity’s expense and even takes a potshot at Scientologist actor Tom Cruise’s well-known contempt for the psychiatric profession. But the primary target of Leary’s Christmas satire is, unusually, Islam.

The grim-visaged Ayatollah Khomeini once famously remarked that there is no humor in Islam. Many of his fundamentalist brethren have made that point abundantly clear by rioting, torching, and murdering – or at the very least threatening to do so – whenever Islam and/or its prophet Mohammed is the butt of a joke, as in the notorious Danish cartoons or the “Mohammed” episode of Comedy Central’s South Park in 2010. And the West has learned its lesson. We have acquired a finely-tuned sensitivity toward Muslim hair-trigger rage and censor ourselves accordingly now. After all, in the multiculturalist West, everyone’s religion, race, sexuality and culture are off-limits from ridicule, except for straight white Christians.
Read more »
at 8:53:00 AM

When is Something Racist? When the Left Says it is 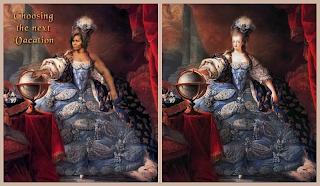 In a short piece in the “Culture Monster” section of the Los Angeles Times, Christopher Knight decries a satirical depiction of the First Lady based on a 1775 portrait of famed French lover of luxury, Marie Antoinette. The image replaces Marie’s face with Mrs. Obama's, and the young queen’s puffy-sleeved left arm with a bare muscular black arm – clearly a poke at Mrs. Obama’s penchant for going sleeveless to show off her buffed guns. Her right hand points to a spot on a world globe, and the image caption reads “Choosing the next vacation.”
Obviously a pointed commentary on Michelle Obama’s high-end wardrobe and frequent lavish getaways such as a glitzy Spanish jaunt and her family’s recent $4 million, 17-day trip to Hawaii, right? If you think so, then you’re not getting the pic’s overt racism, according to Christopher Knight, and you’re probably racist yourself for laughing at it, according to the left.
In his article entitled “Racist image of Michelle Obama based on Versailles painting,” Knight begins by claiming that the image is “baldly racist,” though he doesn’t explain how except to state that “the caricature of Obama as a profligate queen relies on the racist stereotype of an ‘uppity Negro.’”
Wrong. The caricature of Mrs. Obama as a profligate queen relies entirely on her documented behavior as one. Knight doesn’t address this issue at all, and he utterly ignores the image’s caption and its obvious accusation of the Obamas’ hypocrisy in wanting to impose income redistribution upon the rest of us while luxuriating in the champagne wishes and caviar dreams of their lifestyles of the rich and famous.
Read more »
at 8:48:00 AM

A King Lear for Girls 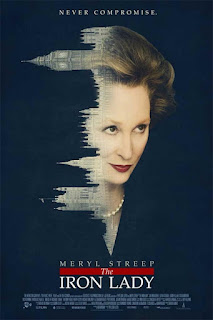 The new film “The Iron Lady,” starring Meryl Streep as former British Prime Minister Margaret Thatcher, initially presented the left-leaning filmmakers with a quandary: how to put forth an Oscar-worthy portrayal without simultaneously honoring a revered icon of the right. They seem to have solved it by making this film about a feminist icon, not a conservative one.
Due for wide release in the U.S. this month, “The Iron Lady” depicts Thatcher’s professional and personal rise and decline, from provincial grocer’s daughter to the top of the political order and back down again to – as the film portrays it – lonely and doddering irrelevance. Along the way we see her confrontation with powerful trade union strikers, forceful defense of free markets, persistence in the face of sexist derision from her political peers, triumph in the 1982 Falklands war, and Churchillian refusal to appease IRA terrorists (looking over that list makes me wish Ms. Thatcher had been our President for the last 3 years…).
The film features Streep, the most Oscar-nominated actress in history, in the role of a lifetime which will surely earn her another Oscar nod. It has been as polarizing as the extraordinary Iron Lady herself. Some critics have given it – or at least Ms. Streep – glowing reviews, while others, and some of Thatcher’s family and former friends and colleagues, have called it an unkind portrayal. One friend of the family said, prior to the film’s release, that Thatcher’s children were “appalled at what they have learnt about the film. They think it sounds like some left-wing fantasy.”
Read more »
at 8:28:00 AM 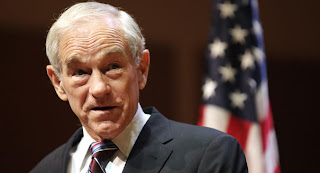 “Imagine for a moment,” a man’s voice intones in an urgent whisper, “that somewhere in the middle of Texas there was a large foreign military base – say, Chinese or Russian.” So begins a video produced by Revolution PAC, comprised of supporters and some former campaign staff of Ron Paul. The text of the video derives entirely from a Paul speech given in early October, in which the presidential candidate condemns what he deems to be our jackbooted foreign policy and likens our military abroad to an oppressive occupation force, while whitewashing murderous insurgents as freedom fighters.
“Imagine,” the voice continues as the text zooms and veers about on the screen,
that thousands of armed foreign troops were constantly patrolling American streets in military vehicles. Imagine they were here under the auspices of “keeping us safe” or “promoting democracy” or “protecting their strategic interests.”
The analogy, of course, is to our own troops in Iraq or Afghanistan, which Paul and his supporters cite as the reason Islamic fundamentalists hate us, along with such other offenses as our military bases on Saudi soil. And the video’s suggestion is that the justifications noted above for our presence there are mere pretexts.
Read more »
at 8:22:00 AM 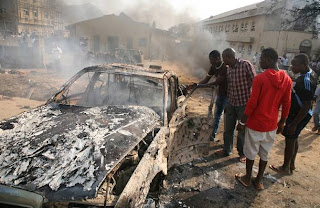 ‘Twas the night before Christmas and all through Nigeria, not a creature was stirring except for the members of the militant Islamic sect Boko Haram, preparing to bomb Christian churches across the country and setting on fire the cars of worshippers inside a church just outside of Damaturu, the capital of Yobe state.
Christmastime in the United States now brings with it a new tradition that is becoming as familiar as eggnog, mistletoe, and the Macy’s Parade: skirmishes in the ongoing cultural war on Christmas. But as the recent attacks in Nigeria prove, in Muslim lands around the world there is also a very real and very violent war on Christmas, or more specifically on Christians themselves minding their own business in peaceful celebration of the birth of Jesus.
In Iraq, for example, all Christian services and masses were scheduled for daylight hours. Why? “Midnight Christmas Mass has been canceled in Baghdad, Mosul and Kirkuk as a consequence of the never-ending assassinations of Christians,” bluntly stated Chaldean Archbishop Louis Sako of Kirkuk in northern Iraq. In Egypt, where we are witnessing the outright, state-assisted genocide of the dwindling Coptic Christian population, churches were also threatened with violence. Christian prisoners in Pakistan, incarcerated for such crimes as blasphemy against Islam, were refused Christmas Day visits from their families.
Read more »
at 8:14:00 AM

"Homeland" Finale - The Verdict is In 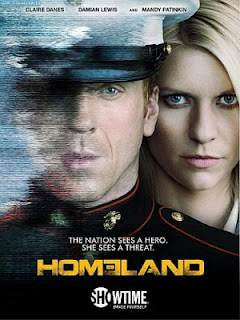 What a disappointment – and yet nothing could have been less surprising. The first season of the Golden Globe-nominated, Showtime series Homeland came to a close last Sunday in a finale that drew mixed reactions from fans and set a record for the highest-rated finale for a freshman series in Showtime’s history. But more importantly, it confirmed that Hollywood is still not ready to take an unequivocal, pro-American stand against our jihadist enemy.
(Warning: MAJOR SPOILERS ahead)
For those who haven’t been following, the show centers on a Marine named Brody (actor Damian Lewis), missing and presumed dead in Iraq since 2003, who is discovered alive, rescued and brought home to suburban Washington D.C. to a lot of CIA self-congratulation and media fanfare. Not only does he become “a poster boy for the war,” as skeptical counterterrorism analyst Carrie (actress Claire Danes​) calls him, he’s even urged by the Vice President to run for political office. But Carrie has reason to believe that Brody has been “turned” traitor and is a sleeper agent involved in an imminent terrorist attack.
Read more »
at 8:04:00 AM