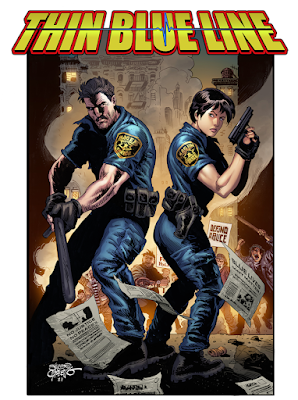 Thanks to the political and cultural dominance of the neo-Marxist left, outright war is being waged on American law enforcement today. Democrat leaders have made defunding police departments, which they smear as irredeemably racist, a prominent plank of their party’s platform. Anti-cop rhetoric from politicians and leaders of radical movements like Black Lives Matter, disseminated by the complicit news media, has created a lethal environment on the streets, where police officers are literally targeted for assassination. Cop-hating communists like former NFL quarterback Colin Kaepernick, who calls for the abolition of police and has been known to wear socks on the football field depicting officers as pigs, is elevated into a cultural icon, offered lucrative sponsorships and his own show on Netflix.

Enter longtime comic book writer and artist Mike Baron, winner of two Eisner Awards (the comic industry equivalent of the Oscars) among others. Along with police officer Joseph Arnold (on pencils and layouts) and illustrator Jeff Slemons, Baron has created Thin Blue Line, a counter-cultural, police-positive graphic novel which follows officer Valeria Baca and her partner Bob Mack as they fight for their community and their own survival amid rioting in the streets. “Mobs burn down city hall, forcing the officers to improvise on the run, relying only on their training and wits as the mayor’s protestations and eagerness to placate the rioters prove fruitless,” reads the description at the project’s crowdfunding page.

Baron opted to crowdfund the project after the concept was rejected by major publishers, who were repulsed by a story line that presented cops as heroes rather than villains. As of this writing, Thin Blue Line has earned nearly three times its goal on its Indiegogo page; all the 56 pages for the book are completely penciled and inked, and some are fully colored. Only the remaining colors and letters are left to complete the book and send it to the printer.

Baron hastens to note on the crowdfunding page that Thin Blue Line is not “a police recruitment pamphlet.” The characters are flawed and the story is never preachy. “It's just entertaining and exciting and very simply demonstrates that not all heroes are perfect, and not all heroes wear capes.” But they do very often wear blue, despite what the propagandists of the left would have you believe.

It is a testament to the creators’ respect for law enforcement that a portion of every contribution to the crowdfunding page will be donated to one or more of the following police assistance programs:

Mark Tapson:           Comics aren’t just for kids anymore like they were when I was a boy. Who exactly is the audience for comics today, and why is this an important arena in the culture war?

My first goal is to entertain. The vast bulk of corporate comics make no attempt to engage, amuse or intrigue the reader, because those writers are not interested in entertainment, leaving comic fans adrift, at least to the point where they are abandoning established publishers and embracing independent comics.

The audience is out there. If your product is outstanding, and by that I mean a story that grabs you on the first page and doesn't let go, the audience will embrace it. Comics are a visual medium, so it helps to have good art.

MT:     Working in the belly of the beast, as it were, of the comics industry, how would you describe how the biz has changed in recent years in terms of the kinds of storytelling and messaging it puts forth?

“There is an industry at work today, taking advantage of our liberty, infiltrating and influencing Western values and democracy,” writes Canadian author and blogger Diane Bederman in her brand new book The Islamophobia Industry: The Insidious Infiltration of Islam into the West. As the memory of the 9/11 attacks on American soil a generation ago recedes for many, this courageous short new work serves as an essential wakeup call to a Western world that, in the name of tolerance and inclusion, is allowing our rights and freedoms to be eroded as the value system of Islam grows in influence and power.

FrontPage Mag readers may recall that I interviewed Ms. Bederman here about her previous book The Serpent and the Red Thread, a unique history of antisemitism blending fiction, history and myth. She is also the author of Back to the Ethic: Reclaiming Western Values, which I reviewed for FrontPage Mag here.

I posed some questions to Ms. Bederman about The Islamophobia Industry.

Mark Tapson: To paraphrase a question you pose in the preface to your new book, why did you decide to write a book about Islam at a time when saying anything critical of it is immediately denounced as bigotry?

Diane Bederman: It says 365 times in the Bible: Do Not Fear.

Fear is debilitating. We often run away rather than confront.

I am of an age and in a place where being called an Islamophobe does not worry me. I cannot be canceled! I worry more about my children and grandchildren. We have to teach our children the importance of protecting democracy and freedom. Ducking and hiding will only lead to a loss of that freedom. The ethic that underpins our freedom, the Judeo/Christian ethic, is 3500 years old. We cannot let it perish out of fear of being called a name or even under threat of death. Without freedom, there is no life.

MT: What is the Islamophobia industry?

DB: There are two #Islamophobia Industries. One is run by Muslims to fight Islamophobia – what they refer to as the irrational fear of Islam. I would suggest that for many, fear of Islam is rational.

The other is the one about which I write: the Industry set out to silence anyone who criticizes or questions Islam. This Industry has managed to turn Islam, a religion and political ideology, into a race. By doing that they can legally stop any criticism because race is immutable; one, obviously, cannot change one’s race, so attacking race is forbidden.

MT: American parents have had their eyes opened about the relatively recent, insidious promotion of Critical Race Theory in schools, but a pro-Islam agenda has been infiltrating our K-12 classrooms for some time now too, hasn’t it?