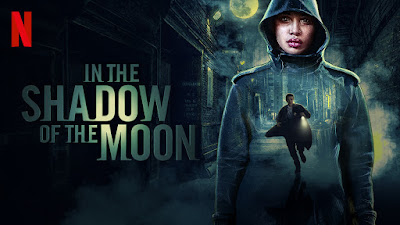 The Nazis have always been Hollywood’s go-to villains, the bad guys every American who isn’t an antisemite or eugenicist can agree are the epitome of evil. They also serve as a convenient substitute when Hollywood doesn’t want to address America’s real-world enemies; in 2001, for example, when filmmakers were adapting Tom Clancy’s thriller The Sum of All Fears for the big screen, they changed the antagonists from Arab terrorists to European neo-Nazis. But Hollywood’s neo-Nazis of today are – you guessed it – American patriots.

Case in point: In the Shadow of the Moon, a late 2019 addition to Netflix’s repertoire which is unlikely to have been seen by the vast and growing numbers of conservatives who have cancelled their subscription to the left-leaning streaming giant, the home of production deals with such radicals as Barack and Michelle Obama and anthem-protesting Colin Kaepernick. For that matter, the movie is unlikely to have been seen by very many people of any political stripe, because it’s not worth watching; its audience rating at the Rotten Tomatoes movie review site is a blah 40, and the rating at Metacritics isn’t much higher (I watch these things so you don’t have to). But the film is notable as a reminder that the entertainment industry is the left’s most subversive weapon for fashioning and disseminating the narrative that American patriots are actually white supremacist domestic terrorists threatening to push the country into a hot civil war.

The story of In the Shadow of the Moon opens in 1988 in Philadelphia – the birthplace of American independence and home of the Liberty Bell (the location’s patriotic associations are significant). It is the scene of the simultaneous, mysterious murders of three seemingly random individuals, including a bus driver whose prominently-featured reading material is a biography of Thomas Jefferson. Officer Thomas Lockhart, a patrol car cop and aspiring detective, is the first to discover a bizarre link to the three deaths, beating his detective brother-in-law (played by the only “name” actor in the film: Michael C. Hall, Showtime’s Dexter) to the punch: the victims have been injected with something that rapidly corrodes their brains and causes massive hemorrhaging. The suspect is a young mixed-race woman in a hoodie. Lockhart confronts her and, strangely, she seems to know personal details about his life. But she is accidentally killed by a train while trying to escape, and without her or a motive, the case is closed.

Fast forward nine years. Lockhart is now a detective and single father (his wife died in childbirth) struggling to make ends meet. He is investigating murders that seem to be copycats of those from nine years earlier. Again Lockhart’s doggedness leads him to a confrontation with the suspect – and it is the same woman, alive and no older than before. But she escapes, and again the murders languish unsolved.

Fast forward another nine years to 2006. Lockhart is a private detective now, off the police force, and so obsessed with the bizarre mystery that he no longer has time to shower or to trim his tangled mess of overgrown hair and beard (because that’s Hollywood’s visual shorthand for obsessed people). He believes the murder suspect is from the future, traveling back in time to target her victims. His weirdness has alienated his now high school-graduating daughter, because it is a given in Hollywood thrillers that the male protagonists are neglectful, workaholic dads whose kids can barely conceal their disappointment and impatience with them. And his brother-in-law is tired of pretending Lockhart isn’t unhinged.

But Lockhart is right, and his obsessive digging has unearthed a clue: that many of the victims were linked through a mailing list belonging to one of them, now deceased: a Confederate flag-owning, white supremacist gun nut who ranted in newsletters about “globalist elites” and who sparked a movement called Real America Patriots. They are what Lockhart calls “a fringe militia group who want to take the country back for the true patriots. Homemade fertilizer bombs. You know the type.” 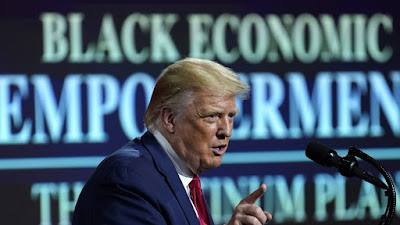 As if the presidency of decrepit Joe Biden weren’t already in a catastrophic freefall, now comes the news that he is hemorrhaging support from black Americans. That’s got to be unsettling for a President who claimed he got his start at an historically black university, who claimed that he was once arrested during a civil rights march, and who declared that if you voted for Trump over him then “you ain’t black.” But the bitter truth progressives must concede is that blacks are abandoning the Democrat plantation because their lives were measurably better under former President Donald Trump, a man the Left spent four years demonizing as Literally Hitler™.

The evidence for black success has been impressively marshalled in a short new book by Wall Street Journal columnist and Senior Fellow at the Manhattan Institute Jason L. Riley. The author of Please Stop Helping Us, False Black Power?, and Maverick: A Biography of Thomas Sowell has just released The Black Boom from Templeton Press, whose central argument – one guaranteed to spark progressive rage, particularly because Riley is black – is that American “blacks saw economic progress under Trump that the Obama administration didn’t come close to matching.”

Bear in mind that Riley is no fan of Trump and did not vote for him in either election, but he has the intellectual integrity to acknowledge that “racial inequality improved on Trump’s watch, and much of the media were too busy agitating against him to take note or give credit where it was due. Reporters suspended any professional and ethical standards in a concerted effort to take down a president they didn’t like.”

Riley begins by noting that, historically, racial and ethnic minority groups in America that have risen fastest from poverty into the middle class did so not through consolidating political power but “rather on developing the human capital – the education, skills, work habits, and attitudes – that facilitates upward mobility.” Irish immigrants of the mid-19th century, for example, quickly established political machines in cities from Boston to San Francisco, but economically, they trailed other immigrant groups who completely lacked such political influence. An Irish middle class emerged only after those political machines declined in power.

So too with blacks, who achieved significant economic progress not through “greater political representation nor with massive welfare-state interventions,” but when they had greater access to labor markets. Blacks do better when America’s economy does better, Riley states: “What’s needed more than political saviors, racial preferences, and wealth distribution schemes, is economic growth and opportunity.”