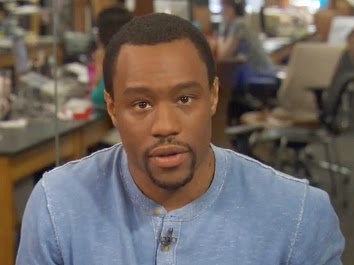 Rather than denounce the shameful lawlessness demonstrated by many “protesters” demanding “justice” in the wake of the grand jury decision about Officer Darren Wilson, progressives are doubling down by posting rationalizations for the rioting.

Marc Lamont Hill, for example, author of a book on “hip hop pedagogy” who hilariously describes himself as “one of the leading intellectual voices in the country,” tweeted, “The story of ferguson tonight is way bigger than looting or violence. People are angry. People are hurting. They're killing us with impunity.” This is nonsense. People don’t loot and burn down neighborhood businesses because they are angry and hurting; they do so because trumped-up racial controversies give a criminal element the cover to commit crimes against business owners who had nothing to do with the controversy. Rioters steal big-screen TVs and Nike sneakers because they’re hurting? Ridiculous. They steal them because they are opportunistic thieves.

The hugely popular Gawker site, in an article claiming that “riots are good,” actually argues that “rioting is economically efficient”: “Since state authorities are always and everywhere most concerned about capital and business interests, threatening to impose costs on them via rioting should have a similar impact on police incentives” – by which it means that destructive rioting now supposedly discourages the police from shooting innocent black males later. What it really dissuades economically is businesses starting up or rebuilding in a neighborhood devastated by looters. The costs it imposes are not on the police, but on the victimized local business owners and their employees. But then, celebrity gossip is Gawker’s strong suit, not economics or common sense.

Perhaps the most unintentionally comical defense of rioting is from Mask Magazine, “an online style + living magazine for antagonist youth.” With a title that could have come straight out of the satiric site The Onion, “Hey, Step Back with the Riot Shaming” explains irrationally that “[People of color] are criminals because we are seen as criminals.” [emphasis in original] So, simply being viewed with suspicion causes people to commit crimes? The writer argues (actually, he doesn’t “argue” anything; he just spews a lot of whiny victimhood) that blacks don’t “own” neighborhoods; there are black-owned businesses, he concedes, but in the next breath he claims that “we don’t have shit,” and so apparently it’s all right to loot and burn the black-owned neighborhood businesses that he says blacks don’t have.

Even before the grand jury decision, as early as August right after the shooting of Michael Brown, a site called the New Inquiry put up a piece with the straightforward title, “In Defense of Looting.” It was Marxist, racist agit-prop written by a guy whose bio identifies him as “a member of the punk band Vulture Shit.” Here’s a sample: “Only if you believe that having nice things for free is amoral, if you believe, in short, that the current (white-supremacist, settler-colonialist) regime of property is just, can you believe that looting is amoral in itself.” Here’s another: “Looters are only stealing from the rich owners’ profit margins. Those owners, meanwhile, especially if they own a chain like QuikTrip, steal forty hours every week from thousands of employees who in return get the privilege of not dying for another seven days.” This sounds like easily dismissed, Occupy lunacy, but unfortunately it is representative of the “thinking” of a depressing percentage of young people.

Also in August, the radical Salon.com posted a piece “in defense of black rage,” in which the writer states about rioting, “I refuse to condemn the folks engaged in these acts, because I respect black rage… How dare people preach and condescend to these people and tell them not to loot, not to riot? Yes, those are destructive forms of anger, but frankly I would rather these people take their anger out on property and products rather than on other people.”

But what Salon and other riot apologists refuse to acknowledge is that those products and property don’t exist in a vacuum; they belong to people who had nothing to do with the controversy and yet whose livelihoods are seriously damaged, and in some cases ruined, by the looting and burning of that property.

In addition to these intellectually insupportable attempts to justify rioting, other progressive voices took the opportunity to simply fuel the fire. In apparent response to tweets that the rioters should “go back to Africa,” The Atlantic’s popular Ta-Nahisi Coates, perhaps best-known for his recent article supporting slave reparations, tweeted, “Not how this works. We are here to run you out, not the other way around.” If he’s saying that blacks are here to run whites out of the country, then that’s a rather militantly racist admission.

Another militant, UPenn’s willfully illiterate Associate Professor of Religious Studies and Africana Studies Anthea Butler – whose unhinged response to the George Zimmerman verdict I have previously written about – posted an equally unhinged response this time, an inflammatory article asserting that Michael Brown was a “sacrifice to the god of white supremacy.”

In all fairness, not all the progressive voices attempted to whitewash the rioting or fan the flames. Charles M. Blow of The New York Times, for example, kept a relatively even keel in his Wednesday op-ed:

No one of good character and conscience condones rioting or looting or any destruction of property. Those enterprises aren’t only criminal, they’re fruitless and counterproductive and rob one’s own neighborhood of needed services and facilities and unfairly punish the people who saw fit to follow a dream and an entrepreneurial spirit, and invest in themselves and those communities in the first place.


“But people absolutely have a right to their feelings,” Blow continues, “including anger and frustration.” Of course. But what the riot apologists won’t acknowledge is that violent rage is not justice or justification.