America at the End of Empire 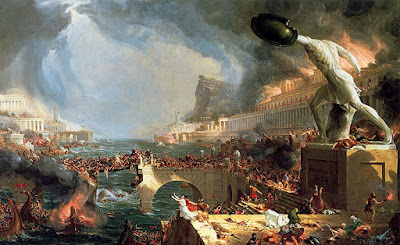 In a recent monologue on HBO’s Real Time, host Bill Maher called Americans a “silly people” for allowing themselves to be mired in culture war struggles, such as the politically correct cancelling of children’s books, while our superpower competition China is laser-focused on political, economic, and military dominance.

“You’re not going to win the battle for the 21st century if you are a silly people. And Americans are a silly people,” Maher asserted. He then referenced the latest “cancel culture” controversy – the woke mob’s targeting of children’s author Dr. Seuss over purported racism in his books: “Do you know who doesn’t care that there’s a stereotype of a Chinese man in a Dr. Seuss book? China. All 1.4 billion of them couldn’t give a crouching tiger flying fuck because they’re not a silly people. If anything, they are as serious as a prison fight.”

Maher pointed out that China has “built 500 entire cities from scratch, moved the majority of their huge population from poverty to the middle class, and mostly cornered the market in 5G and pharmaceuticals” in two generations. Meanwhile in America, “half the country is having a never-ending woke competition deciding whether Mr. Potato Head has a dick and the other half believes we have to stop the lizard people because they’re eating babies. We are a silly people,” he continued.

“Do you think China’s doing that, letting political correctness get in the way of nurturing their best and brightest?” Maher added. “Do you think Chinese colleges are offering courses in ‘The Philosophy of Star Trek, ‘The Sociology of Seinfeld,’ and ‘Surviving the Coming Zombie Apocalypse’? Those are real and so is China. And they are eating our lunch. And believe me, in an hour, they’ll be hungry again.”

Maher’s prescient lecture came just before the Chinese delegation ate their American counterparts for lunch at last week’s U.S.-China meeting in Alaska, telling Secretary of State Antony Blinken to his face that China does not view America as operating “from a position of strength.” With a new American President so decrepit he is shielded from the public by his handlers; with our southern border collapsing under tsunami of illegal aliens; and with Americans at each other’s throats in a not-so-Cold Civil War, China’s not wrong about that.