The Politically Incorrect Guide to Catholicism 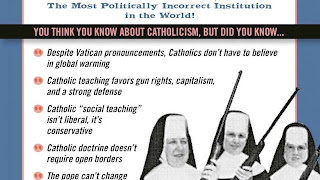 A 2015 Pew survey reported that the total number of Catholics in the United States dropped by 3 million since 2007, now comprising about 20 percent - or one-fifth - of the total population. Catholicism is losing more members than it gains at a higher rate than any other denomination – a recent development which the radical progressives at Salon celebrate. Why is this an issue that should worry Americans and the Western world at large?
One key reason is that the fastest-growing religion in the country and around the world is Islam – something Salon radicals also no doubt celebrate. But the fundamentalist brand of Islam that is once again on the rise is antithetical, indeed openly hostile, to the values of Western civilization, and for many centuries Catholicism as a central component of European identity was a bulwark against its spread. But for various reasons the West has lost confidence in its cultural identity and moral authority in recent decades, and the result has been submission to decadence, to cultural Marxism, and to Islam. If we are to reverse a civilization in rapid decline, we must undertake a resurgence of Western exceptionalism with a militant Christian ethos at its core.
For Catholics who have backslid or grown apathetic, that means waking up to what is at stake, and then making a renewed commitment to understanding and manifesting the tenets of their own religion, a religion that has been steered toward emasculation, socialism, and interfaith suicide by the radical left. For non-Catholics as well – even atheists – it means acknowledging how crucial a revivified Christianity is to a defense of Western civilization, and educating themselves about the myths and realities of Catholicism.
Enter John Zmirak’s timely book, The Politically Incorrect Guide to Catholicism, published by Regnery. Zmirak is an editor, teacher, screenwriter, political columnist, and the author of the popular Bad Catholic's Guides and The Race to Save Our Century: Five Core Principles to Promote Peace, Freedom, and a Culture of Life. His work has appeared in First Things, The Weekly Standard, USA Today, and FrontPage Magazine, among other venues.
The book’s cover declares Catholicism to be “the most politically incorrect institution in the world!” and features a trinity of grinning nuns with guns – itself politically incorrect enough to trigger leftists who prefer a less militant, more social justice-oriented, and submissive Christianity. The cover also features such triggering bullet points as:


and perhaps most politically incorrect and offensive:

“Civilizations, empires, great powers, can fall apart very fast. Collapse can come suddenly, like a thief in the night. And we should be very wary of assuming that our civilization, the civilization of the early 21st century West, will oblige us by declining gradually.”
That warning from noted historian Niall Ferguson is the opening and the theme of the vital new documentary The Fight of Our Lives: Defeating the Ideological War Against the West from filmmaker Gloria Z. Greenfield.
Greenfield’s previous work includes Body and Soul – The State of the Jewish Nation in 2014 (which I reviewed for FrontPage Mag here), Unmasked Judeophobia in 2011, and The Case for Israel – Democracy’s Outpost in 2009. She is the president of Doc Emet Productions, the simple and powerful motto of which is “Truth in film.” Unlike, say, propagandist Michael Moore’s front-and-center, demagogic presence in his films such as Fahrenheit 9/11, director Greenfield gets out of the way and crafts her narratives about anti-Semitism, history, Judeo-Christian values, freedom, and democracy from the authoritative, articulate arguments of the many intellectuals who lend their expertise to her projects.
Such is the case with her latest documentary, which features compelling observations and insights from well-known historians, journalists, and thinkers such as Niall Ferguson, Victor Davis Hanson, Ayaan Hirsi Ali, Alan Dershowitz, Melanie Phillips, Bruce Thornton, Raymond Ibrahim, Brooke Goldstein, Ibn Warraq, Alan West, and many more respected commentators from academia, human rights organizations, and think tanks. [Full disclosure: I am included among the featured speakers, as are David Horowitz Freedom Center Fellows Thornton and Ibrahim.]
The Fight of Our Lives addresses the various internal and external threats facing Western civilization today, and cautions that if we don’t recognize these grave dangers now and rouse ourselves to resist and overcome them, then it is no hyperbole to say that the West as we know it will come to – as Ferguson warned – a swift and inexorable end.
Read more »
at 11:59:00 PM 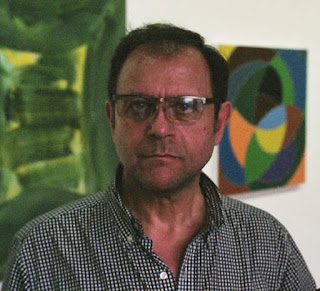 “In the fall of 2016,” New York University professor Michael Rectenwald recently told The Daily Caller, “I was noting an increase of this social justice ideology on campuses, and it started to really alarm me. I saw it coming home to roost here at NYU, with the creation of the bias reporting hotline, and with the cancellation of the Milo Yiannopoulos talk because someone might walk past it and hear something which might ‘trigger’ them.”
Rectenwald, himself a leftist, created an initially anonymous Twitter account, @antipcnyuprof, to speak out against that ideology and the “absolutely anti-education and anti-intellectual” classroom indoctrination he was witnessing, as well as the collectivist surveillance state that the campus was becoming, as students were urged to report each other for the sin of committing microaggressions.
In October of that year, he outed himself as the man behind the controversial Twitter account, and “all hell broke loose.” He swiftly found himself the target of shunning and harassment from his colleagues and the NYU administration. In true Cultural Revolution fashion, several colleagues in his department in the Liberal Studies Diversity, Equity and Inclusion Working Group published an open letter declaring him guilty of incorrect thinking. “The thing that is interesting here is that they were saying that because I don’t think like them, I am sick and mentally ill,” Rectenwald said to the Daily Caller.
Instead of kowtowing to the campus totalitarians, Rectenwald declared himself done with the Left in a February 2017 tweet (“The Left has utterly and completely lost its way and I no longer want anything to do with it.”) and has gone on to be an even more fervent defender of free speech and academic freedom. He has appeared often in conservative media to discuss those issues and the harassment he has received from the Left.
Recently Rectenwald even filed a lawsuit against NYU and four of his colleagues for defamation. He consented to answering some questions for FrontPage Mag about his conflict with the NYU ideologues.
Mark Tapson:  A year ago on Twitter you wrote, “Goodbye to the Left, goodbye.” Can you describe your intellectual journey from “left-liberal activist” to outspoken “deplorable” and what drove that seemingly sudden transition?
Read more »
at 11:55:00 PM