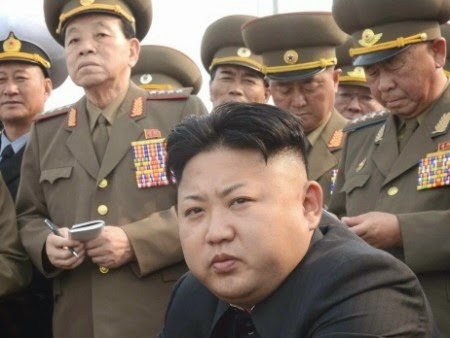 If anyone still needs convincing that pop culture matters, that even the frivolous fluff can impact politics and world affairs, here is dramatic evidence: an otherwise unremarkable Hollywood comedy that hasn’t even been released yet has led to the crippling cyber-hacking of a major corporation, threats of 9/11-style terrorism against movie theaters and other targets including the White House, self-censorship by the entertainment industry, and increased tension between the U.S. and North Korea’s already unstable and belligerent Kim Jong Un, each of whom blames the other while a suspiciously quiet China watches from the sidelines. And the fiasco isn’t over yet.

For those who haven’t been following the story, it began in recent weeks when a hacker group calling itself Guardians of Peace cyber-attacked Hollywood’s Sony studios and released thousands of the production company’s private emails and other confidential information like employee Social Security numbers. It’s been devastating in a number of ways, including internal turmoil arising out of embarrassing emails that may end in the sacking of film chairman Amy Pascal – not to mention an estimated $100 million blow to Sony.

The instigation for the hacking seems to be an upcoming Sony comedy called The Interview, starring James Franco and Seth Rogan as talk show hosts who are coerced by the CIA into assassinating tyrant Kim Jong Un during a trip to North Korea to interview him. Kim was not amused by the concept; neither were many progressives who felt that a comedy about killing a head of state was in poor taste and that Sony brought the subsequent hacking upon itself (of course, these are the same people who thought that a 2006 feature film about the assassination of George W. Bush was just dandy). Class action lawsuits from Sony employees who were affected by the cyber attack are gearing up, claiming that “Sony knew it was reasonably foreseeable that producing a script about North Korea's leader Kim Jong Un would cause a backlash.”

After an investigation, the FBI officially declared that North Korea was behind the hacking (while not necessarily originating from inside its borders), which Obama called an act not of war, but of vandalism; he promised a “proportional response.” The totalitarian state took great umbrage at the accusation; it not only denied the attack, it generously offered to help the U.S. ferret out the real culprit, much like O.J. Simpson offered to help find his wife’s killer. The North Korean news media even accused the U.S. of “gangster-like behavior” and claimed to have evidence that our government itself was deeply involved in the production of The Interview. “Toughest counteraction will be taken against the White House, the Pentagon and the whole US mainland, the cesspool of terrorism,” threatened a statement from North Korea.

The Guardians of Peace followed up the cyber-attack by issuing a threat of possible terrorist activity against any theaters that dared screen The Interview. “The world will be full of fear,” read their English-challenged message:

We will clearly show it to you at the very time and places “The Interview” be shown, including the premiere, how bitter fate those who seek fun in terror should be doomed to. Soon all the world will see what an awful movie Sony Pictures Entertainment has made…

Remember the 11th of September 2001. We recommend you to keep yourself distant from the places at that time. (If your house is nearby, you’d better leave.) Whatever comes in the coming days is called by the greed of Sony Pictures Entertainment. All the world will denounce the SONY.

The Department of Homeland Security said that there was “no credible intelligence to indicate an active plot against movie theaters within the United States.” But stars Seth Rogan and James Franco cancelled all media appearances in the wake of the controversy. Most theater chains opted not to show the film, and then Sony decided against releasing The Interview at all in any form — including VOD or DVD.

(This wasn’t the only film shut down by the recent North Korean displeasure. Shooting of actor Steve Carell’s thriller Pyongyang, about a Westerner in North Korea who is accused of espionage, has been cancelled as well.)

President Obama threw Sony under the bus, claiming that they should have called him first rather than set a bad precedent by backing down to North Korea. (This is the same President whose administration blamed the murder of Ambassador Chris Stevens in Benghazi on an unknown YouTube trailer for an utterly incompetent movie about the life of the Muslim prophet Muhammad. Hillary Clinton told the father of one of the Benghazi victims, “We will make sure that the person who made that film is arrested and prosecuted.”) Sony responded by claiming that it did contact the White House first.

Regardless, human rights activists are planning to airlift DVDs of The Interview into Kim country via hydrogen balloons. Fighters for a Free North Korea, run by a former government propagandist who escaped to South Korea, has for years used balloons to get transistor radios, DVDs and other items into North Korea in order to open up the outside world to the news-deprived masses. Thor Halvorssen’s Human Rights Foundation in New York has been helping to finance the balloon drops, and will add DVD copies of The Interview as soon as possible.

Halvorssen says that Hollywood is largely unaware that its movies and TV shows are being used so effectively in this manner. The past dozen or so drops, for example, have included copies of Braveheart, Battlestar Galactica and Desperate Housewives. “Viewing any one of these is a subversive act that could get you executed,” Halvorssen says, “and North Koreans know this, given the public nature of the punishments meted out to those who dare watch entertainment from abroad.” [I have written elsewhere about these risks that the freedom-starved North Koreans undertake just to watch a contraband film] “The Interview is tremendously threatening to the Kims,” Halvorssen continues. “They cannot abide by anything that portrays them as anything other than a god. This movie destroys the narrative” – much like the satirical 2004 film Team America: World Police famously lampooned Kim Jong Un’s monstrous father.

While our tabloid news media seem obsessed with the more inconsequential and gossipy aspects of this affair – like the emails in which Sony executives disparage Angelina Jolie’s talent and make racial jokes at Obama’s expense – there are serious ramifications of the cyber-hacking mystery. The entertainment industry as a whole, for example, failed to show a quick and united resistance to the threats of a foreign tyrant. But more significantly, the Guardians of Peace exposed America’s vulnerability to the warfare of the future – cyberwar.