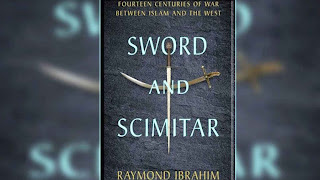 On the 18th anniversary of the September 11, 2001 jihadist attacks on United States soil, as on every anniversary, the cry “Never forget!” went out across social media as Americans somberly vowed to keep the memory of 3,000 murdered innocents alive. But the danger today is not that we will forget the victims, but that we will forget the perpetrators. The New York Times epitomized this willful blindness with a commemorative tweet on the day declaring that “airplanes took aim at the World Trade Center” on 9/11 – a cowardly evasion by the Times, denying any human agency whatsoever behind the attacks instead of placing the blame squarely where it belongs: on Islamic terrorists waging war on unbelievers in the West.
In our politically correct self-loathing induced by decades of leftist indoctrination, the West – or what properly used to be called Christendom – has spent the past eighteen years not extinguishing the Islamic supremacism that brought down the Twin Towers, but often aiding and abetting it, welcoming the barbarians inside the gates and pretending we can coexist. As Raymond Ibrahim writes in his new book Sword and Scimitar: Fourteen Centuries of War Between Islam and the West, “The West has learned to despise its heritage and religion, causing it to become an unwitting ally of the jihad.” As a culture we now lack the historical perspective to view the 9/11 attacks in the context of this ongoing, 1400-year clash of civilizations. “Very few understand,” Ibrahim notes, “that this modus operandi stretches back to and has been on continuous display since Islam’s first contact with Christian civilization.”
Raymond Ibrahim is a Shillman Fellow at the David Horowitz Freedom Center and a scholar at the Middle East Forum. His previous books include the eye-opening The Al Qaeda Reader and Crucified Again, a must-read about the genocidal persecution of Christians in the Middle East. Sword and Scimitar, an elegantly packaged book (with 16 pages of black-and-white plates) from Da Capo Press, is a deeply researched, thoughtfully analyzed military history of the ancient, existential struggle between the mortal enemies Islam and Judeo-Christian civilization. “[W]hile this book is not a general history of Western-Muslim relations,” Ibrahim clarifies, “it is most certainly a history of the most general aspect of said relations – war.” It “demonstrates once and for all that Muslim hostility for the West is not an aberration but a continuation of Islamic history.”
Read more »
at 8:34:00 PM