Why Britain Has Bond and America Has Bourne 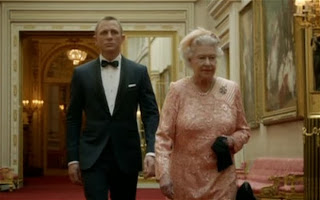 In the wake of disturbing revelations from Wikileaks and NSA whistleblower Edward Snowden about widespread government spying, the British public appeared to be unruffled by a controversy that sparked heated debate in the United States. Guardian columnist Jonathan Freedland says “Americans are outraged to discover they are being spied on and watched. Britons give a kind of polite shrug of the shoulders and say, ‘So what?’” What accounts for this disparity of attitudes? Apparently the answer is Bond. James Bond.

To begin with, a recent article at Public Radio International argued, the British are already much more accustomed than Americans to living under perpetual government surveillance. Nick Pickles (can that really be his name?) of Big Brother Watch estimates there are as many as four million surveillance cameras focusing their unblinking eyes on a country of just over 60 million people.

Freedland points out an even bigger difference between the two countries: unlike American populists, British society “still bears the imprint of its monarchical origins,” which means that power flows from the government to the people, not the other way around. Britons, he says, are “subjects rather than citizens,” more inclined to submit to being spied upon than Americans, who tend to strongly resent government invasion of privacy.

Also unlike Americans, the British by and large inherently trust their government and its spy agencies. Why? Curiously, research shows that secret agent icon 007, fictional though he may be, has deeply influenced that perception.

James Bond is an unabashed patriot, essentially a civil servant (albeit one with a license to kill) putting his life on the line on behalf of Queen and Country. He trusts his government support team implicitly, from gadget master “Q” all the way up to his superior “M.”

At one point in the most recent Bond blockbuster movie Skyfall, for example, Bond is a captive of the creepy Silva, once an agent like Bond but who has turned on his former masters. “Just look at you,” Silva muses about Bond, who is recovering from a gunshot wound. “Barely held together by your pills and your drink –”

“Don’t forget my pathetic love of country,” Bond finishes for him.

“You’re still clinging to your faith in that old woman,” says Silva, referring to the unwavering patriot M, who keeps on her desk a Union Jacked ceramic bulldog, symbol of British fighting determination. That trust in government authority has influenced British audiences over the decades since Ian Fleming introduced Bond in the 1950s.

Now contrast Bond with his American movie counterpart Jason Bourne, portrayed by Matt Damon (in The Bourne Legacy, the latest installment, Jeremy Renner takes over the lead from Damon, but as a different character). The distinction between Britons’ and Americans’ worldviews quickly becomes apparent.

In The Bourne Identity, The Bourne Supremacy, and The Bourne Ultimatum, Jason Bourne is the ultimate lone wolf – trusting no one but himself and devoid of any government support whatsoever. Indeed, unlike the parade of evil geniuses such as Dr. No or Goldfinger in the Bond films, who are all threats external to the British government, the single villain of the entire Bourne franchise is the ruthlessly corrupt program within our own government that spawned the agent to begin with.

Bourne reflects the historical and philosophical strains of individualistic spirit and anti-government distrust typical of Americans, that set us apart from our former rulers across the Pond. We root for the lone wolf who exposes government wrongdoing. Senator John McCain made this connection back in August when he complained, “There’s a young generation that believe [the NSA’s Edward Snowden is] some kind of Jason Bourne.”

But Americans identify with Bourne only so far. There’s a central reason that his short-lived franchise is failing and Bond’s is going stronger than ever after 23 films over 50 years. It’s impossible to imagine Bourne – this man without a country, with a safety deposit box brimming with fake passports – proclaiming his patriotism as Bond does in Skyfall. His only mission, apart from seeking redemption for his past as a brainwashed killing machine, is to be left alone. By contrast, James Bond is a morally unconflicted hero who does believe in the essential rightness of his country and in the existence of evil that must be defeated – and that is a belief and a purpose that resonate with Britons and Americans alike.