The Festival of Dangerous Ideas 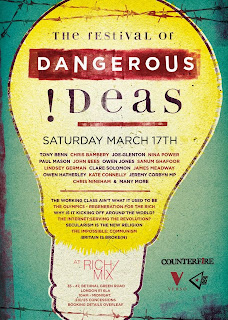 “America is a country that is now utterly divided when it comes to its society, its economy, its politics,” wrote David Simon, author and creator of the gritty television crime drama The Wire, in a recent article in the UK Guardian. “There are definitely two Americas.” Indeed there are, although Simon blames this chasm not on the political momentum of the radical left, who are hell-bent on leading us into a post-American future, but on the failure of a Reagan-era capitalism to build “a just society.”

Simon’s article is an extract of his presentation at this year’s Festival of Dangerous Ideas at the Sydney Opera House in Australia, which ran for two days last month. The Festival of Dangerous Ideas saw Simon join a range of “notable thinkers” in discussion and debate “about all sorts of ideas that are dangerous in different ways,” said the festival’s curator Ann Mossop. “Dangerous can be that kind of dangerous that gets you killed, or it can be the kind that means you have to rethink your opinion on something. But it can also be something that is quite fun, that takes a lighter view of the kind of dangerous ideas of everyday life.” Of course, it’s one thing for ideas to be provocative, and another for them to actually be any good, but I digress.

The event’s thinkers included anti-bullying flagbearer, anti-Christian bully Dan Savage, who was on hand to promote open marriages, which he claims save more relationships than destroy them; web theorist Evgeny Morozov, who has criticized the United States government’s “Internet Freedom Agenda” for convincing our enemies abroad “that Internet freedom is another Trojan horse for American imperialism”; Hanna Rosin, a Slate and Atlantic writer whose book The End of Men: And the Rise of Women posits that the patriarchy is dead; anti-globalist ecofeminist Vandana Shiva, whose presentation was called “Growth = Poverty”; and Guardian writer Erwin James, a convicted double-murderer who now advocates for prison reform. His presentation was entitled “A Killer Can Be a Good Neighbor.”

(In the future, if the Festival of Dangerous Ideas organizers want to broaden the event’s range of “notable thinkers” and present some really shocking ideas that run counter to the orthodoxy of the self-congratulatory liberal elite, concepts that might challenge their rigid worldview, perhaps they could consider inviting such notables as Thomas Sowell, Mark Steyn, and David Horowitz, for some really eye-opening balance. Just a suggestion.)

Simon’s show The Wire, , in which his marginalized and “economically irrelevant” characters on the streets of Baltimore butted up against government and bureaucratic forces beyond their control, ran from 2002-2008 and was known for addressing sociopolitical themes like the drug war and poverty. Today Simon confronts those issues more directly in such venues as last month’s Festival or in the Guardian.

In his address, entitled “Some People Are More Equal Than Others,” Simon excoriated capitalism’s inability to correct America’s income inequality, solve environmental problems, and heal the racial divide. He argues that since 1980 – the beginning of the Reagan era, though he doesn’t refer to it – we have increasingly embraced a profit-obsessed capitalism that has severed itself from “the social compact.” We have abandoned an American dream that was accessible to all and that gave us “the American century,” “all because of our inability to basically share, to even contemplate a socialist impulse.”

The result is that America has become “a horror show” in which family income is declining, basic services such as public education are “abandoned,” and the underclass is “hunted through an alleged war on dangerous drugs that is in fact merely a war on the poor.” He also claims that “capital” has bought the electoral process, effectively shutting down the popular will and crushing hope. Actually, what has shut down the popular will at the voting booth is rampant voter fraud, but again I digress.

“That may be the ultimate tragedy of capitalism in our time,” Simon declares,” that it has achieved its dominance without regard to a social compact, without being connected to any other metric [than profit] for human progress.” Capitalism is a great engine for building wealth, but a poor “blueprint for how to build the just society”:

So I’m astonished that at this late date I’m standing here and saying we might want to go back for this guy Marx that we were laughing at, if not for his prescriptions, then at least for his depiction of what is possible if you don’t mitigate the authority of capitalism, if you don’t embrace some other values for human endeavor.

He doesn’t describe himself as a Marxist, however:

I’m utterly committed to the idea that capitalism has to be the way we generate mass wealth in the coming century. That argument’s over. But the idea that it’s not going to be married to a social compact, that how you distribute the benefits of capitalism isn’t going to include everyone in the society to a reasonable extent, that’s astonishing to me.

“The only thing that actually works,” he argues, “is not ideological... It’s pragmatic, it includes the best aspects of socialistic thought and of free-market capitalism.” I’m not sure what the best aspects of socialistic thought are, but this country finds itself torn in two precisely because we have at the helm a man who, like Simon, argues for wealth distribution to build a “just society.” How does that seem to be working out? How does the utopian impulse to mold a “just society” always end? Not in the elimination of poverty but in less freedom and less prosperity for all.

Simon wants to rise above ideology, but the radical left, which ascended into power five years ago, is nothing if not ideological, and the socio-economic horror show Simon decries has been facilitated, fed, and exacerbated, not ameliorated, by Barack Obama and his handlers. David Simon is correct: there are definitely two Americas, and the way to begin closing that divide and propel us into another “American century” is to focus on keeping us a “free” society, not a “just” one.