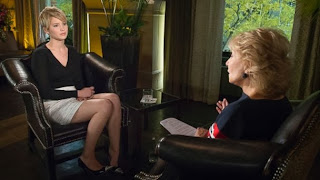 In the first grade I had a crush on a girl named Patty and decided to let her know it in true grade school fashion: by pretending not to like her. I shouted “Hey, Fatty!” at her across the classroom, in what seemed at the time to be a clever play on her name, even though Patty was not fat. Shockingly, this failed to win her over, and it was the dawning of my realization that women don’t respond favorably to criticism of their weight. The entertainment media seem not to have learned the lesson I did at six years old.

In a TV interview with Barbara Walters this week, Jennifer Lawrence, the wildly popular 23-year-old, Oscar-winning star of The Silver Linings Playbook, Hunger Games and American Hustle, responded to a question about her criticism of the media for exacerbating women’s body image issues, saying,

I think when it comes to the media, the media needs to take responsibility for the effect that it has on our younger generation, on these girls that are watching these television shows, and picking up how to talk and how to be cool…

And the word fat. I just think it should be illegal to call somebody fat on TV. If we’re regulating cigarettes and sex and cuss words because of the effect it has on our younger generation, why aren’t we regulating things like calling people fat?

Well, we shouldn’t be regulating that because saying hurtful things shouldn’t be illegal. I think, however, that most people understand and don’t disagree with her point that the media are cruelly obsessed with the physical appearance of female celebrities, and the celebs themselves do not bear the impact alone. An entire generation or two or three of female fans also absorb the media’s lesson that women must meet a faultless standard in order to be considered beautiful.

Lawrence has often been outspoken on this subject. Last year, for example, she told Elle magazine: “In Hollywood, I’m obese. I’m considered a fat actress.” In November during a live interview, she responded forcefully to an audience question about how young girls can deal with the pressure to look perfect: “Screw those people,” she said, meaning the critics:

The world has a certain ideal – we see this airbrushed perfect model image … you just have to look past it. You look how you look and be comfortable. What are you gonna do, be hungry every single day to make other people happy? That’s just dumb.

She has called out shows like E! Fashion Police, in which the horrid Joan Rivers and her catty cohorts, for whom no woman can be skinny enough, ruthlessly dissect actresses’ red carpet appearance: “There are shows like The Fashion Police,” Lawrence said, “that are just showing these generations of young people to judge people based on all the wrong values and that it's okay to point at people and call them ugly or fat.” Rivers shot back impotently on Twitter that Lawrence was arrogant, a charge that applies to no one in Hollywood less than the unpretentious JLaw.

As if to prove Lawrence’s point, a controversial gif has been making the rounds of the internet, showing a startling degree of airbrushing used on the already gorgeous actress for a 2011 cover photo of fashion magazine Flare. In addition to the usual and unobjectionable alteration of color tones and lighting, the magazine inexplicably trimmed Lawrence’s waist, thighs, and arms; elongated her neck; added contour to her cleavage and cheekbones; and flattened her belly. The effect was to chisel JLaw’s hotness down, unnecessarily, to a cold, bony, misogynistic ideal. Such image manipulation is no surprise to anyone; the process has been common in the fashion biz and media for decades. But if her healthy, natural curves couldn’t make the grade on a magazine cover, what woman’s can?

In a recent interview with the BBC, Lawrence put forth a positive challenge to the media: “We have the ability to control this image that young girls are going to be seeing... girls see enough of this body that they will never be able to obtain. It’s an amazing opportunity to rid ourselves of that in this industry.”

I wouldn’t count on that opportunity coming to fruition. There is no way around the fact that profit for the fashion industry is driven by the twin engines of insecurity and fantasy. In response to public outcry, the fashion industry has made a few exploratory efforts to use models who look like “real women” (I actually don’t like that phrase; models are real women too) and learned that the public by and large doesn’t respond favorably to that. Until women themselves stop desiring the fantasy, the media and fashion world will keep exploiting it.

Maybe Jennifer Lawrence’s influence among legions of young fans will be the beginning of the end of that desire.