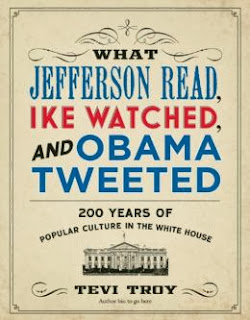 Though we might think that the President of the United States should have the gravitas and proper sense of priorities to operate above the triviality of the entertainment biz, Barack Obama has won two elections in no small measure because of his shrewd understanding of, and engagement with, pop culture. He chats on late night talk shows, hangs with today’s biggest recording artists, and jets out to Hollywood periodically for fundraisers – it’s a wonder he has time for all the golfing required of the Leader of the Free World. But he’s not the first president to exploit that arena – only the savviest.

In the recent book What Jefferson Read, Ike Watched, and Obama Tweeted: 200 Years of Popular Culture in the White House, Tevi Troy examines how presidents have interacted with pop culture from our nation’s beginning to today. Why should this matter? Because “how a president engages popular culture,” Troy writes, “tells us about the people who elected him, the changing nature of American politics and society, and the tension between high-, low- and middle-brow pursuits.” The book “is an exploration of how presidents have made use of a multiplicity of cultural pursuits… and how those pursuits have in turn shaped them and the nation.”

The Founding Fathers, for example, were extraordinary bibliophiles even in a time when reading was already a widespread pursuit, at least in the upper classes. “I cannot live without books,” Jefferson said, and John Adams’ library exceeded even his. They weren’t just indulging in beach reads, however; they were soaking up philosophy and Enlightenment ideas that helped them shape the American Experiment.

Besides books, the Founders also eventually acquired an appreciation for theater, the primary form of non-reading entertainment at the time, and not the highbrow pursuit it is today. Our early presidents used this common appreciation for the theater to connect with the people. Tyler, for example, “could quote Othello in a political speech because even his most simply educated countrymen were taught Shakespeare and because so many people went to the theater.”

Andrew Jackson, on the other hand, was badly educated and poorly-read, but connected easily with the common people; after him, “presidents wouldn’t have to be well-read or well-educated, but they would need to have the common touch.” And that touch depended heavily on presidents’ connection – or lack thereof – with popular culture.

It is a commonplace now that American pop culture, for better or worse, has become the world’s pop culture, but until the mid-19th century America wasn’t even considered to have a culture. In 1820 a European writer observed, “In the four quarters of the globe, who reads an American book?” But President McKinley’s childhood affinity for the Atlantic Monthly indicated the rising importance of a literary American culture. By the end of the 19th century, there would be no one in Europe who didn’t read American books. Uncle Tom’s Cabin, the bestselling novel of the century and second overall only to the Bible, broke down those international barriers.

As American technology advanced, her pop culture and Presidents kept pace. Roosevelt not only had a voracious appetite for books – his collection of 15,000 volumes dwarfed those of Adams and Jefferson and may be the largest of any president – but he was also a shrewd master of the new radio technology which gave the President unprecedented power to craft his own public image by appearing directly before the people. “Radio,” writes Troy, “made Roosevelt; and he, in important respects, made radio.” He proved to have a real affinity for pop culture, reaching out to Hollywood stars and studio heads for popular support.

Television magnified this power; it wasn’t long before TV began swaying elections – note the famous incident, for example, of the first televised presidential debate, between Richard Nixon and John F. Kennedy. Nixon’s sweaty discomfort contrasted sharply with Kennedy’s youthful good looks and charismatic, on-camera ease, and lost him the debate – although Nixon redeemed himself to TV audiences during his own presidency with a well-received appearance on the hit show Rowan & Martin’s Laugh-In.

In the musical realm, the pop music world hated LBJ because of its opposition to the Vietnam War (TV didn’t serve him well, either; his wife observed that it was “his enemy”). But Troy states that “the real battle lines of the culture war were drawn during the Nixon administration. From then on, pop music would be firmly on the side of the Democrats.”
But “more than any other medium,” Troy writes, “the movies help presidents capture the American imagination”:

The most astute presidents of the cinematic era, such as Clinton and Reagan, have understood that movies tell stories about themselves and about the country that can reach voters with no interest in political speeches but who hold great interest in what is taking place on the silver screen.

Troy spends some time discussing modern presidents’ White House movie lists. He asserts that Jimmy Carter’s list, for example, signaled an important historical shift: for the first time, a president’s cultural taste was aligned with that of the cultural elites. But for him, movies were an escape, while his successor Ronald Reagan understood “their ability to shape the American psyche.” Reagan’s effective leadership at least partially resulted from his insight into pop culture, according to Troy (contrary to popular reputation, both Reagan and George W. Bush were big readers, but it suited the media to paint them otherwise).

Closer to our own time, Presidents continued to try to use pop culture to their advantage. Bush the Elder, for example, used Bobby McFerrin’s a capella hit “Don’t Worry, Be Happy” as an unofficial campaign theme, and in a groundbreaking moment during the 1992 campaign, Bill Clinton famously played blues saxophone on Arsenio Hall’s talk show.

And then of course there is Obama, “a person shaped by popular culture more thoroughly than any other president in our history,” who successfully appropriated the hipness of rock stars, movie stars, and rappers while at the same time basking in the media’s unsupported image of him as an intellectual, an image Troy punctures. The author examines at length Obama’s shrewd manipulation of Hollywood and the media.

Though it suffers from occasional lack of documentation for some of the author’s strong assertions (such as “his keen understanding of the movie zeitgeist helped Clinton win two terms as president”), What Jefferson Read, Ike Watched, and Obama Tweeted: 200 Years of Popular Culture in the White House is a fun, light read and eye-opening for anyone who dismisses the significance of pop culture in the grand political scheme.