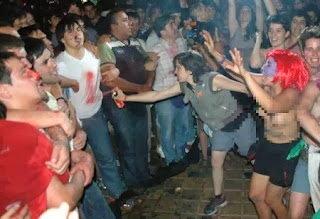 If you missed the workshops, discussions, and spontaneous guitar circles of last month’s National Women’s Encounter in Argentina, you missed out on some real pro-abortion positivity and women’s empowerment. Among the issues tackled at this feminist Mecca last year were the legalization of abortion and problems of gender violence; this year, however, the participants apparently decided to focus on waging some gender violence of their own.

A glowing writeup in The Argentina Independent explains that the annual Encounter brings together thousands of feminists from Argentina and elsewhere in South America (the Independent estimates 25,000 in attendance in 2012). The event is “based on a premise of democracy and horizontal organization, [whose] aim is to provide a pluralist space to debate issues specific to women and the feminist movement.” These issues include human trafficking, domestic violence, and – unsurprisingly, somehow – “the defense of the rights of the earth.” It’s unclear how the latter qualifies as a woman’s issue, but the earth’s rights are apparently more valued than those of the human unborn, who probably don’t even get mentioned, much less defended, in all the Encounter’s “pluralist” debates.

Just to clarify: “horizontal organization” is essentially a euphemism for “mob,” which explains why these radicals are so fond of the concept (and of euphemisms). It deemphasizes such qualities as leadership and personal responsibility while empowering anarchic criminals like the Occupy Wall Street movement to run rampant. And besides, “vertical organizations” are so patriarchal and obsolete, like men themselves.

Each year the Encounter takes place in a different city; this November the city of San Juan was the unlucky winner. Knowing that this event tends to end in vandalism and graffiti, and having received threats of such against the Cathedral of San Juan Bautista, as many as 1500 rosary-praying Catholic men formed a human shield to peacefully protect it (700 more people of both sexes were inside, praying with their bishop). The men found themselves beset by a raging, Christian-hating, “horizontal organization” from the National Women’s Encounter that reportedly numbered about 7000.

If you want to see the true face of hateful bigotry, you would be hard-pressed to find a better current example than this disturbing video footage of radical feminists savagely attacking and even sexually molesting the cathedral’s peaceful guardians. The women, many of them topless, descended like a pack of rabid animals (and if you think that is an offensive comparison, check out the video and judge for yourself whether these women deserve more respect). They spray-painted the men’s crotches and eyes, painting swastikas on their chests and foreheads and Hitler moustaches on their faces. They performed obscene sexual acts in front of them and pushed their breasts into the men’s faces, all the while shouting “get your rosaries out of our ovaries,” a catchy slogan for which the subtext is “We demand the right to murder our own children.” Reports from young Catholics present at the cathedral gave the impression that it was a “satanic attack” with “demonic figures.”

According to the InfoCatolica website, some of the women chanted a song with the lyrics: “To the Roman Catholic Apostolic Church, who wants to get between our sheets, we say that we want to be whores, travesties [is this a mistranslation? “Transexuals,” perhaps?] and lesbians. Legal abortion in every hospital.” How charming. Feminists have gone from striving for equal dignity in the workplace and at the voting booth to rejecting dignity altogether and embracing their own degradation.

During the attack some men were driven to tears. Amazingly, none of them retaliated against these vile abuses. The police who were present reportedly told the media that they were unable to intervene because “they are women.” That’s debatable.

After unsuccessfully trying to get into the building, the women burned a life-sized effigy of Pope Francis. “If the pope were a woman, abortion would be legal,” they shouted. The parish priest Fr. Rómulo Campora said that “the burning of the image of Pope Francis is an offense, not just to the Church but to every Argentinean because the pope is Argentinean.”

Praising the men who defended the church, Campora said: “San Juan loves its God, loves its faith, loves its family.” He lamented the damage done to the cathedral and concluded that “if they don’t respect life, we can’t expect them to respect the buildings.” While the site of the protest was the front of the cathedral, InfoBae reports that “the whole city awoke to graffiti in favor of abortion.”

According to the pro-life site ArgentinosAlerta.org, the cathedrals of Bariloche, Paraná and Posadas have also been attacked by these radicals in past protests. “These encounters of women represent today’s civilization that seeks to impose its own rules,” reads the site. “On one side, they try to impose political agenda that international organizations dictate: population control, abortion, contraception, homosexualism [sic]. On the other side, they become barbaric in the most literal sense.” Just as the video demonstrates.

This insanity isn’t limited to hot-blooded South Americans. Remember that in our very own Texas last year, during the debate over a law banning abortion after 20 weeks, pro-abortion protestors chanted “Hail Satan!” while police confiscated jars of urine and feces that the feminists had intended to hurl at pro-life supporters. And yet it is the Tea Partiers – who don’t even litter, much less commit crimes, and who seek to protect the lives of the unborn – who are considered dangerous and intolerant.

Here is a topic suggestion for next year’s National Women’s Encounter: perhaps someone in their horizontal organization could explain how they reconcile their feminist solidarity with the gender violence they commit against the female half of the future population they are so casual about aborting.