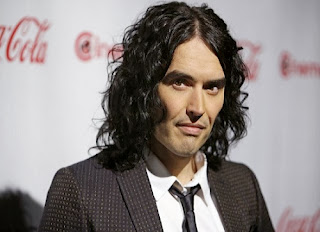 My first exposure to British actor/comedian Russell Brand was when he hosted the 2008 MTV Video Awards. I was an instant – well, whatever is the opposite of “fan.” As time went on and I saw more of him, and occasionally read his op-eds in the Guardian, I liked him even less – or rather, I didn’t like his politics or his comedy (when did it become the aim of comedians to offend rather than entertain? Note to self: future article topic). However, a couple of recent incidents are forcing me to reconsider Brand in a different light.

Earlier this summer Brand appeared on the MSNBC show Morning Joe to promote his current comedy tour, The Messiah Complex – which, as he explained to the trio of unprepared co-hosts, deals with the ways in which the images and messages of such iconic figures as Jesus and Che Guevara have been exploited through history. Although I suspect I would find much of his take on the subject to be wrongheaded, I give him credit for building a comedy show around such an unusually deep and rich topic.

Anyway, Brand finally tired of the MSNBC hosts’ painfully awkward jocularity and asked them, “This is what you all do for a living?... You’re delivering news to the people of America?” They appeared terrified by his intellect and his unwillingness to play the part of Shallow Celebrity Guest Plugging His Latest Gig.

When the male co-host joked about coming to work dressed in rock star mode like Brand, the comedian pounced again: “That’s superficial. That’s the problem with current affairs: you forget about what’s important, you allow the agenda to be decided by superficial information. What am I saying, what am I talking about? Don’t think about what I’m wearing. These things are superficial.” The interview video went viral and garnered Brand raves. I confess that even I respected him for calling out the hosts on their silliness and unprofessionalism.

More recently, he confounded expectations again when he was given a rather fluffy award at a Hugo Boss-sponsored GQ bash. As he wrote afterward in the Guardian, “These parties aren’t like real parties. It’s fabricated fun, imposed from the outside,” and Brand “just wasn’t feeling it.” So he decided “to treat the whole event as a bit of a laugh.”

Upon receiving his award, Brand stunned the audience by reminding them that “Any of you who know a little bit about history and fashion will know that Hugo Boss made the uniforms for the Nazis.” In the 1930s Hugo Boss manufactured police and postal uniforms. He joined the Nazi Party in 1931 and two years later began manufacturing Nazi uniforms all the way through World War II. The company began making men’s suits in the 1950s, and today it’s a giant of upscale men’s fashion, its checkered origins buried in the past – until Brand resurrected them.

“The Nazis did have flaws,” he continued to the uncomfortable crowd, “but, you know, they did look fucking fantastic, let’s face it, while they were killing people on the basis of their religion and sexuality.” Shockingly, this got him ejected from the GQ after-party.

Brand simply wasn’t impressed with “an irrelevant menswear supplier with a double-dodgy history,” as he called it later. But he realized from the crowd’s reaction “that for some people this was regarded as an event with import. The magazine, the sponsors and some of those in attendance saw it as a kind of ceremony that warranted respect.”

On the one hand, it was rude of Brand to needlessly insult his hosts, particularly as the recipient of a prize, however meaningless that award might have been. So I don’t respect him for that. On the other hand, just as he had no patience for the intellectual lightweights in his MSNBC interview, he was unafraid to puncture the gaudy facade of the terminally self-serious fashion industry (if you wonder just how much of a sense of humor the fashion realm has about itself, try publicly poking fun at Vogue’s Anna Wintour; you’ll be frozen out of the coolest celebrity circles faster than if you’d left Scientology). And I can respect him for that.

Still, it might be easy for me to write him off as a bit of an ass – until I recently discovered a very touching, articulate dedication he wrote for addiction-plagued singer Amy Winehouse in the wake of her death two years ago. Brand, a former addict himself, hit all the right notes in his appreciation of her talent and his condemnation of the media’s macabre obsession with her decline.

Russell Brand and I are probably at opposite ends of the spectrum on most political issues, and his comedy isn’t my style. But if he keeps insisting on bringing a challenging intelligence, lack of pretention, and emotional honesty to the normally shallow waters of the fashion world, entertainment biz, and news media, I might start becoming a reluctant fan.