The Disconnectedness of Being Connected 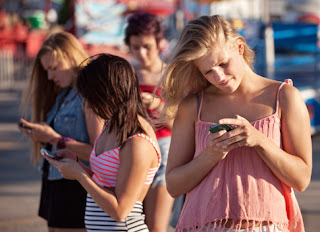 This morning I awoke to discover I had no internet access. I don’t mean that after a leisurely breakfast and shower I eventually sat down to my computer and couldn’t get online. I mean I literally “awoke to discover” it, because the first thing I did when my eyes opened was to grab the cell phone from my night stand and check my emails. My inability to do so immediately left me as agitated as a junky in need of a fix, highlighting for me just how addicted I, like countless others, have become to being perpetually connected to the outside world through my phone.

Except that it doesn’t really connect me at all; if anything, my phone disconnects me from the outside world. Yes, it links me to a multiverse of information and distractions. But there is something about experiencing the world through the addictive central portal of a smartphone that creates a psychological and spiritual distance from the experience and from the world itself.

Recently I saw a two-minute film being shared on Facebook called I Forgot My Phone. In it we follow a young woman through a day in which she is surrounded by friends but ends up feeling alienated and alone even in the midst of them. It’s an amusingly familiar but ultimately bleak picture of how smartphones in today’s mobile age change the way people experience each other and the world.

She wakes up in the arms of her boyfriend (husband?), but rather than sharing the intimate moment, he scrolls through his cell phone. She’s at lunch with friends when the chatter devolves into silence as everyone focuses on his or her phone. She’s bowling with friends and looking for a high five, but her teammates leave her hanging because they’re immersed in their cell phones. She attends a concert in a small club where people are watching the band – on their cell phones. She’s at her own birthday party, which everyone experiences indirectly through their tiny phone screens. At the end of the day she’s back in her boyfriend’s arms; she turns off the light, only to have her face illuminated by the light from his cell phone, which he is scrolling through. He is connected to an illusion of innumerable places and people and possibilities, and completely disconnected from what should have mattered most, the woman in his arms and their moment together.

This detachment from one’s immediate reality reminded me of the Tumblr site “Selfies at Serious Places,” which collects photos from the internet of people acting inappropriately at places such as Auschwitz, the 9/11 Memorial, and the Anne Frank House. Their phones’ instant, ever-present connection to a social media universe enable these young people to detach from the somber stillness of such sites and from the meditation on humanity and mortality they might inspire, and to turn the moment into a goofy, irreverent joke.

In 1978 Jerry Mander’s controversial book Four Arguments for the Elimination of Television posited that there are serious problems inherent in the medium of television that make it irredeemable. It affects the psychology of viewers, increases passivity, makes people more susceptible to control, changes family dynamics, alters our understanding of nature, and flattens perception. The same can be said for smartphones.

I’m no Luddite; I wouldn’t suggest for a moment that we “eliminate” (if that were even possible) today’s technological advances that would seem, in past eras, indistinguishable from magic. But perhaps it’s time for a Four Arguments for Our Liberation from Smartphone Addiction. As my eyes opened in bed this morning, I didn’t even take time to ground myself in my own thoughts and senses and surroundings, or to acknowledge my wife at my side. We need to remind ourselves where to draw the line, when to detach from technology’s hold on our consciousness, and how to maintain a perpetual connection not to the internet cosmos, but to our interior selves and our loved ones.