Why Do America’s Manliest Actors Come From Somewhere Else? 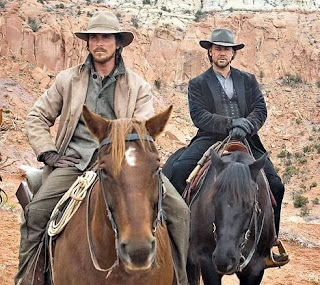 Last week a male Facebook friend of mine posted the status update, “Just watched ‘How the West Was Won’ starring John Wayne, Henry Fonda, James Stewart, Gregory Peck, and Richard Widmark. I feel like a woman by comparison.” There was a time when Hollywood was brimming with such American stars who were real rough-and-tumble men’s men, rugged leading men who could knock you to the ground just by squinting at you. Who are the big-screen men’s men of today? And why do so many of them seem to come from somewhere else?

Lamenting the rumored, quiet acting exit of Jack Nicholson, Christian Toto at Big Hollywood describes him as “a handsome gent but hardly in a metrosexual manner. He’s a man's man on screen, and even when he flashes his tender side one raised eyebrow reminds us the devil lurks not too far from the surface. That sense of danger is missing in many male actors today, regardless of all the iron they pump to prep for a part.”

Nicholson isn’t the only Hollywood man’s man riding off into the sunset: the heydays of Harrison Ford, Clint Eastwood, and Bruce Willis are behind them as well. Who is there now to fill their well-worn boots? George Clooney? Close, but too urbane. Tom Cruise? He plays some tough guys, but one never gets the sense that he actually is a tough guy. Will Smith? Likeable, but zero sense of danger about him. Leonardo diCaprio? Terminally baby-faced.

This is not to knock anyone’s acting chops. Popular American actors today like Johnny Depp, James Franco, Tobey MaGuire, and Shia LaBoeuf simply lack the two-fisted, virile presence of, say, Steve McQueen, Kirk Douglas, Lee Marvin or James Coburn. Imagine MaGuire aiming a .44 Magnum one-handed and growling, “Go ahead – make my day.” I’m not sure he could even lift a .44 Magnum.

Sure, we have some red-blooded leading men with an aura of danger about them: Denzel Washington, Ed Harris, Tommy Lee Jones, Samuel L. Jackson – all on the downslope of their careers. Who will replace them? Bradley Cooper? Ryan Gosling? Channing Tatum? Jake Gyllenhaal? Fine actors but metrosexuals all. None of them – yet – has the world-weary toughness of Humphrey Bogart or Robert Mitchum, that sense of danger Toto wrote about, or that Wild West ruggedness which emasculated my Facebook friend.

Meanwhile Hollywood has imported a vast number of actors from the Land Down Under (and actresses too, but let’s focus on the men for today). The Australian invasion began, more or less, with Mel Gibson many years ago; of course, his career has taken a possibly fatal hit thanks to a series of public meltdowns of late. But he opened the floodgates for others who, like Gibson, brought to the table a blend of classic good looks, talent, and perhaps most significantly, a raging masculinity at a time when that seems to have gone into decline among American actors.

What about Idris Elba, you say, or Mark Strong (TV’s Low Winter Sun)? Tom Hardy (Batman’s Bane)? All manly – and all British. Action star Jason Statham? British. Rakish Gerard Butler? Scottish. Intimidating Liam Neeson? Irish. Christian “Batman” Bale? Welsh.
I’m generalizing, of course; there’s nothing scientific about my theory, and we could debate all day about examples of both American and foreign leading men who don’t fit the mold, or about what constitutes “manly.” The fact remains that a surprisingly significant percentage of Hollywood’s most assertively masculine stars today are foreign. Why?

Dare I suggest that it may be the result of decades of hardcore feminist assault on manhood in this country? That you can see that emasculation reflected in Hollywood movies, which then reinforce the assault on manhood all over again? And that this has resulted in American actors who come across as, shall we say, less imposing than a Clint Eastwood?

In my experience, the gender confusion, resentment, and immaturity that plague American males today is not an issue for foreign men and women. Again I’m generalizing, but European women as a whole manage to be strong and feminine while wanting their men to act like men and not like immature frat boys, narcissistic metrosexuals, or guys who are so in touch with their feminine side that they can no longer retrace the steps to their masculine side.

Likewise with Australians. My wife is Australian and I’ve been there many times. I can tell you that traditional gender roles flourish there – men are men and women are women, and ne’er the twain shall meet, as Kipling might say. Both genders there are comfortable with that. Thus, the actors Oz exports to America are “manly men” who perfectly fit the definition of a movie star and a man’s man: the men want to be them and the women want to be with them. That used to describe American leading men as well – just not so much anymore.