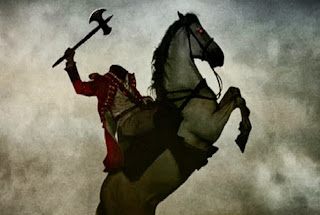 Several weeks ago, AMC premiered a new drama in the coveted time slot immediately following Breaking Bad, hoping to snare Walter White’s legions of fans: Low Winter Sun, a gritty cop drama set in decaying Detroit. Unlike The Shield, however, another gritty cop drama, Low Winter Sun’s protagonists aren’t just morally compromised – they’re flat-out bad. Every character is unsympathetic; it’s impossible to care about them. I gave up on the relentlessly humorless series after a few episodes – just in time to start enjoying a show that is its polar opposite: the unabashedly lively, entertaining Sleepy Hollow.

Fox’s new fantasy drama series begins with the unique premise that Ichabod Crane, the protagonist of Washington Irving’s 1820 short story The Legend of Sleepy Hollow, has been mystically transported forward in time to contemporary Sleepy Hollow, New York. Unfortunately, so has a version of Irving’s Headless Horseman, here reimagined as a demonic killing machine, one of the Four Horsemen of the Apocalypse described in the Biblical book of Revelation.

The show’s creators have revamped Crane too, as a British soldier who accepted the rightness of the American patriots’ fight for independence from the King and switched sides. He was actually carrying out a spy mission for Gen. George Washington before awakening in 2013 and finding himself suspected in the beheading of the local sheriff at the hands of the fearsome Horseman. Police Lt. Abbie Mills, investigating her mentor’s gruesome murder, takes a chance on partnering with the suspect Crane to solve the supernatural mystery and to take on the dark forces that seem to have been unleashed in her formerly sleepy corner of the world.

Unrelenting suspension of disbelief is a requirement for viewing this almost comically fast-paced series, which is stuffed to the gills with supernatural phenomenon: witches, the apocalypse, Biblical revelations, ghosts, demons, everything but UFOs – all in the first two episodes. The show moves at such breakneck speed that it doesn’t allow the viewer time to question the show’s confused theology and lapses in credibility (e.g., cops don’t transport crime suspects in the front seat) – and frankly, it’s so much fun that you don’t care about those.

Sleepy Hollow’s pro-American Revolutionary spirit and unmuddied moral waters are a welcome change from the moral equivalence so common from Hollywood (the terrorism drama Homeland comes to mind). There is even a sympathetic nod to the Tea Party – not the protesters of Crane’s day who dumped British tea in the Boston Harbor, but today’s movement protesting big government overreach. When Abbie tells Crane his story sounds insane, he takes a look at their breakfast receipt and announces, “What’s insane is a ten percent levy on baked goods! You do realize the Revolutionary War began on less than two percent? How is the public not flocking to the streets in outrage?!”

The show is full of such light, humorous touches despite featuring some disturbing horror elements and (non-gory) violence. Crane’s antiquated colonial worldview makes for some amusing exchanges with the thoroughly modern Abbie. At one point, for example, she gives him a handgun to protect himself, and he has occasion to use it, after which he tosses the gun. “You fired only one bullet,” Abbie tells him. Crane, accustomed to 18th century firearms, replies, “There were more?!”

Part of what sells the show is the convincing acting from British stage and film actor Tom Mison, who hams it up ever so slightly as Ichabod Crane, and Nicole Beharie, who played Jackie Robinson’s wife in 42, as Abbie Mills. They – and the show’s cinematic feel – elevate something that might sink in cheesiness in the hands of lesser talents.

Sleepy Hollow is not the Shakespearean canvas of Breaking Bad; nor is it meant to be. But it is scary and funny, the characters are sympathetic, and the rousing good-versus-evil conflict is more engaging and uplifting than Low Winter Sun’s depressing nihilism. I’m not alone in my appreciation: the series premiered to an audience of 10 million and was Fox’s highest-rated fall drama premiere since 2006. For viewers looking for a satisfying, fun, patriotic thrill ride, head to Sleepy Hollow.