The Muslims Are Coming! 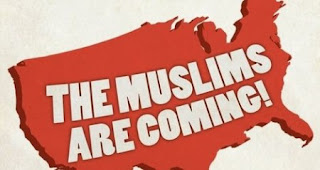 This Friday marks the Chicago, Seattle, and Los Angeles premiere of a documentary called The Muslims Are Coming!, which features a band of Muslim comedians touring middle America “to explore the issue of Islamophobia!” The exclamation mark is there to let you know that the show is going to be great fun! And all just in time for the 12th anniversary of the 9/11 attacks (as they say in comedy, timing is everything).

As the film’s website explains, this project arose in a context in which “Islam has been duly tarnished by the mainstream media.” Actually, it has been duly tarnished by the barbarism of Islamic fundamentalists, and duly defended and whitewashed by the mainstream media. “We are so many years out of 9/11,” the website continues, “and Muslim fear-mongering hasn’t dissipated.” Yes, 9/11 was so long ago and yet the Islamophobia inexplicably never ends! When are we Americans going to get over it and realize we have nothing to fear from Muslims?

As FrontPage Magazine has pointed out many times, “Islamophobia” is a Muslim Brotherhood construct to paint legitimate concern about the demonstrable threat of fundamentalist Islam as bigotry and “Muslim fear-mongering.” That threat didn’t end on 9/11 – it is a continuing danger not just on our own soil but worldwide, as the most cursory look at history and current events will show. It is offensive and dishonest to claim that the media are to blame for Islam’s bad reputation and that 9/11 is in the distant past. The day that the victims of 9/11 stop living in American hearts will be a day of shame and surrender for this country.

The description continues: “If all you’ve ever heard about Islam”

is that it’s a dangerous religion, that women cover themselves, and that those shifty eyed Muslims have evil ulterior motives, this movie wants to give you a new stereotype. Yeah, this movie is going to convince you that Muslims are just a bunch of hilarious people.  By the end of this movie, you’re gonna love the pants out of Muslims.

That is just pathetic.

The documentary’s point is that not all Muslims are terrorists – some of them are hilarious! And getting to know them will make Americans less bigoted and fearful, and that will heal the clash of civilizations. “The ultimate goal: present an Americanized face of Islam, create awesomeness between Muslim- and non-Muslim Americans of all stripes, and get these crazy kids to fall in love (the crazy kids being Muslims and non-Muslims everywhere)! Rest assured, you’ve never laughed this hard at a Muslim!”

It won’t solve anything. It won’t make terrorism go away, or the stealth jihad, or the violent hatred of Western kaffir, because those are objective threats and not paranoid fantasies that can be dispelled by a standup routine.

The comics themselves make this point in the film’s trailer. One says to an interviewer, “I don’t know if Muslims watching this documentary will consider these comics proper representations of Islam.” Another says, tearfully, “I wish I had more support from certain subsets of the Muslim community, and I don’t.” One reads aloud a message on the computer, “I wish these folks the best. They may well be setting themselves up to be killed.”

Exactly. These comics are potential targets of their own co-religionists’ savage intolerance. So to pretend that “certain subsets of the Muslim community” are not a threat, or that there isn’t something seriously wrong with the religion, is willful blindness. To try to shift the blame to average Americans for their supposed “Islamophobia” is literally to give aid and comfort to the enemy.

American bigotry and ignorance are not the problem. The problem is a politically correct insistence that there aren’t serious doctrinal issues of violence, religious supremacism, misogyny, anti-Semitism and totalitarianism within Islam that need to be confronted honestly and unflinchingly. Is suspicion of Muslims common today in America, twelve years after 9/11? Of course, and with good reason. And who is to blame for that suspicion? The media? Ignorant fear-mongers? Or Islamic fundamentalists themselves?

A more honest documentary about anti-religious bigotry in this country now would actually be called The Christians are Coming!, because there is far greater antagonism in the media and pop culture toward Christianity today than toward Islam. Are there even any Christian comics? I don’t see any with HBO specials or appearances on Late Night with David Letterman. Anyone billing himself as a Christian comic should prepare to be utterly ignored, if not reviled, by the entertainment industry.

For Muslim-Americans who don’t want to be judged by the evil their fellow believers do, the answer is not to try to slap a happy face on the issue and expect to laugh our troubles away, but to acknowledge that Islam itself, not “Islamophobia,” is the biggest obstacle to peace.