Wahlberg & Sheen Finally Get HS Diplomas – But Which One Earned It? 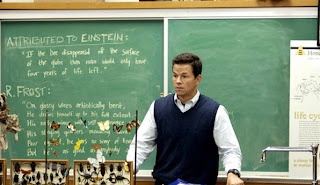 You often hear success stories in which high school dropouts like Walt Disney, Richard Branson, and Elton John go on to win fame and fortune, but you don’t often hear about those rich dropouts then going back and collecting that diploma. In an interesting coincidence this week, celebrity news sources reported that two forty-something stars finally picked up their long-delayed high school diplomas – but in quite different ways.

Mark Wahlberg, 42, dropped out of school in the ninth grade after being charged with attempted murder (that’s right, attempted murder), then broke through to stardom by way of Calvin Klein underwear ads and Marky Mark and the Funky Bunch videos. He went on to acting acclaim in Boogie Nights, The Departed, and The Fighter, in addition to producing TV shows like Entourage. He’s married and a committed Catholic with four children by his ex-model wife.

With all that personal and professional success, nothing would have been easier for him than to dismiss his unfinished education as pointless. But Wahlberg was motivated to graduate by his children. He told People magazine, “I didn’t want the kids saying, ‘You didn’t do it, so why do I need it?’ They are all wanting to do things in their future that require an education.”

So Wahlberg began quietly taking online classes and hired a tutor, even studying between takes of his movie Two Guns and keeping it a secret from costar Denzel Washington. In June he was finally awarded his diploma, which he calls “a huge accomplishment” and “a huge sense of relief.” At an event for the Taco Bell Foundation for Teens, where he presented scholarships to Taco Bell employees, he told People, “It’s so much harder at 41 going back and trying to do all these difficult tasks.”

And he’s still not done with his education. “I would love to go to USC and study film. I don’t want to become a veterinarian or anything, [just study] things that further my career and broaden my horizon.”

Actor Charlie Sheen, 48, finally picked up his diploma as well, from Santa Monica High School where he’d been a credit and a half short for 30 years. Sheen abandoned school for acting at the first opportunity and hit it big at the age of 20 in 1986 with Oliver Stone’s Platoon, then in Stone’s Wall Street the following year. He ultimately went on to be the highest-paid actor on television in recent years, for his series Two and a Half Men.

Along the way he also acquired a reputation as a sort of insanely drug-fueled, porn-partying decadent whose personal mottos (“Winning!”) and uniquely colorful turns of phrase (like his 2011 tour titled “My Violent Torpedo of Truth/Defeat is Not An Option Show”) made him an object of public ridicule and fascination.

The paparazzi website TMZ asked this week why the winning Sheen bothered to finish high school after all this time. Was he perhaps, like Wahlberg, inspired by his children (five by three wives, all divorced)? No, Sheen replied simply that “it was a loose end” and he had “a lifelong habit of never finishing things.”

And how did Sheen pick up that credit and a half? Like Wahlberg, by hiring a tutor, taking online classes, and studying on set? Not exactly. Sheen said he got his remaining credits because one of the baseball coaches at the high school (Sheen played high school ball) “worked the principal,” telling him, “Hey, [Sheen’s] donated a lot of dough to the school and he does a lot of stuff in the community. It makes perfect sense to just give it to him.”

School officials had told TMZ that Sheen earned his diploma partially through some charity work, but Sheen said those were merely events to which he had lent his name or simply showed up. He said the school had asked him to do some inner city social work, which Sheen said “sounded dangerous and like they were just using me.”

A study in contrasts. Wahlberg humbled himself to knuckle down and do the work, while Sheen had his diploma simply given to him. Wahlberg made up for three years of missed schooling and still intends to go to college to “broaden my horizon,”while aging frat boy Sheen merely joked with TMZ that college would be “hella fun.” Sure, Charlie Sheen is still rich and famous and “winning,” at least in his mind; but if he wants a little more respect and longevity he would benefit from the quiet example of Mark Wahlberg’s purpose and perseverance.