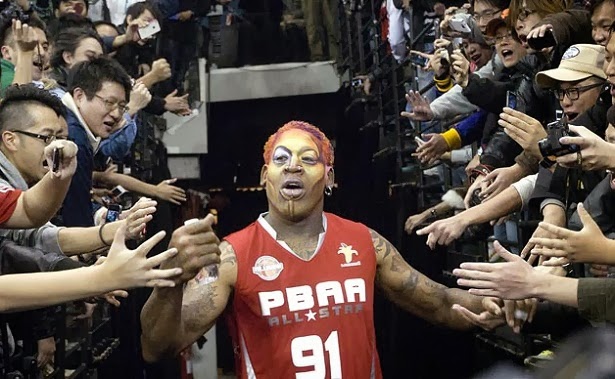 Professional oddball Dennis Rodman is back in the news again – angrily ranting in interviews, praising his “friend for life” Kim Jong-Un (dictator of one-third of the Axis of Evil), and pursuing world peace through basketball diplomacy.

I’ve been reluctant before to comment on Rodman’s antics; he makes himself an easy target, and Acculturated’s Demetrius Minor has already taken him down a serious notch. But Rodman’s no longer just a joke – except perhaps to the North Korean regime – and his blind spot about the totalitarianism of his “awesome” BFF is dooming his endeavors.

You may be aware that Rodman has been trying to use the sport to build bridges between the United States and the heavily armed camp that is North Korea (or so he claims; his true motives, like his interview responses, are fully comprehensible only to him). But as everyone including Rodman now acknowledges, he is no savvy peacemaker.

Asked in a CNN interview last week whether he would raise with Kim the issue of American citizen Kenneth Bae, who has been held for over a year in North Korea for “anti-state” crimes, Rodman exploded and suggested that Bae deserves his punishment: “Do you understand what he did in this country?” Bae’s sister, Terri Chung, found the remarks outrageous. “It’s one thing to play games with his own image, but this is not a game, this is a man’s life,” she said.

Last Wednesday Rodman brought retired NBA recruits to North Korea to put on an exhibition game against the local team. Former star Charles Smith complained that the game was “dwarfed” by the controversy surrounding Rodman. As for diplomacy and politics: in a line that will set the bar very high for 2014’s Understatement of the Year, Smith said that “Dennis is definitely not skilled in those particular areas.”

That’s a wonderful dream. The problem is, North Korea is not like, say, Iran – Axis of Evil #2. Western pop culture, from hairstyles and jeans to rock music and bootleg Hollywood movies, has seduced many Iranians away from the grip of their theocratic regime. Access to the internet, restricted though it is, has helped encourage that.

But the brutalized North Korean people have little access even to food, much less to their rigidly controlled internet. They are fed daily propaganda by the state media about the outside world that paints Americans as suffering in poverty and misery, and that depicts North Korea as a major world power led by the demigods of the Kim family, who actually send economic aid to the U.S. The average psychologically enslaved North Korean citizen probably knows nothing about Dennis Rodman or the freedom and prosperity he represents.

My blogger friend Kira Davis recently tried to put a positive spin on Rodman’s efforts, expressing that “maybe the silver lining is that Rodman – in all his weirdness – has cracked a door no one else could get open.” Anything is possible, but pundit Claudia Rosett has a more pessimistic take: she points out that he may believe he’s out to “make the world a better place. But it is quite likely that to Kim and his circle of the North Korean elite… Rodman’s visits look like a gift of tribute from America.”

A year ago, Rosett writes, Rodman brought three Harlem Globetrotters to Pyongyang for an exhibition game for Kim, foreign diplomatic envoys, representatives of international bodies, military attachés and other foreign guests. “With a cast like that,” she says, “it wasn’t just the basketball game that was on display to these dignitaries. It was Kim himself, holding court, with the entertainment provided by the visiting Americans.”

Under totalitarians like Kim, who throws relatives to the dogs in fits of temper, “culture” is a tool for brainwashing the masses and maintaining power. For Kim, cultural “exchange” is all about making trophies, as Rosett put it, of the American sports stars who bow and perform for him. “He’s friendly with [Rodman] just so he can mislead his people,” says one defector. As NBA Commissioner David Stern said, “Although sports in many instances can be helpful in bridging cultural divides, this is not one of them.”

Rodman will have to do much more than just dance for the North Korean elites to make cultural inroads into that sad country. It will take the collapse of the regime itself and the gradual dawning of freedom for the people mentally and economically imprisoned there.