The Forest of Assassins 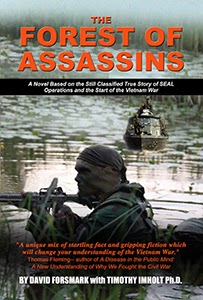 The Forest of Assassins is an action-packed novel by David Forsmark and Timothy Imholt, based on the still-classified true story of SEAL operations and the beginning of the Vietnam war. In addition to being a FrontPage contributor, Forsmark is the owner and president of Winning Strategies, a full service political consulting firm in Michigan. Formerly a longtime book, movie and concert reviewer for the Flint Journal and the popular culture critic for Credo, his work has also appeared in National Review Online, St. Austin Review and elsewhere. Imholt is a PhD in nuclear physics from MIT who works in the defense industry. Before that, he was an Army sniper. He is a candidate for Congress, running against Niki Tsongas in Massachusetts.

I asked David for some background on, and insight into, the story and the reality behind it.

Mark Tapson:         How did the idea for this novel come about? And why a novel rather than a nonfiction work? How much of the book is fiction?

David Forsmark:   Back when I was doing lots of writing for a local paper, I got a call from a retired Navy veteran who had an idea for a Sand Pebble-style epic story. He had been stationed on a destroyer in the harbor in Shanghai when it fell to the Communists, and had gotten a taste of the great duty the American military had in the International Zone during the heyday of gunboat diplomacy.

We became good friends while working on that, and I realized he had a better true story to tell, but he could not write a memoir. He had been one of the first Navy SEALs. When he was sent to Vietnam it was still an experimental unit, and they were making up doctrine on the fly. Officially, the operations his unit conducted – the “snatch and grab” of Viet Cong tax collectors and cadres who were terrorizing the villagers, and especially the raids along the coast on Russian-built installations – were conducted by the South Vietnamese. Which is laughable as they had no such capabilities at the time.  So, much of the story is still technically classified and he had a Commander’s pension to protect and a sick wife to care for. Also, a liberal administration could always decide to give him up to the Vietnamese communists as there is no statute of limitations on at least one of the true parts of the story.

More than half the story is true.  And the stuff you think is most likely to be made up, probably isn't.

MT:     There’s quite a bit of detail in the novel that lends a real authenticity and immediacy to the characters and their Vietnam backdrop. It feels like it was drawn from personal experience, but you’re obviously too young. How did you go about researching that detail and creating that authenticity?

DF:     When I go back and read this now, I realize that no amount of research could have gotten me this level of detail. But in this case, it was easy. I just had to listen. My friend was an amazing guy. The first time I met him, he was in his 60s, but climbing out of the small lake he lived on having done a lap! When his wife took ill, he quit smoking in one day, after having been a smoker since age 12. He used to say that SEAL training was as much about stubbornness and mental toughness as physical skill. I think he was being somewhat modest about his skill set, but I could see that in him.

He was a born storyteller, even though he never really got to tell his stories. Both he and his wife hinted to me that for a time in the late 60s he was “officially” out of the Navy, though his service jacket fills in those blanks. I never got to hear that story, even though he related this classified one to me. I can only imagine.

MT:     In the book, you tell quite a different story of the Gulf of Tonkin Incident, which led to the escalation of American troops in Vietnam. Some of the conspiracy types on the left have a sort of a “truther” movement that this was trumped up and our ships were never fired on by the Communists. You say this isn’t true, but you also challenge the official story. Tell us about that.

DF:     Sure, and this is key to why I think the book is important. The American position is still that, like the Maine or the Lusitania, the North’s (really lame) attack on the Maddox and Turner Joy was completely unprovoked, that the ships were in international waters on patrol and minding their own business. And as far as our ships were concerned, that was true. But the Communists were convinced that our destroyers were providing support for the SEALs in their missions north. But our ships had no idea what was going on. It’s still a secret, though not a well-kept one.

I'm no Edgar Snowden here. All of our enemies knew what was going on, and it’s fairly widely known in the special forces community. Elliot Abrams even made a reference to it in his book about his persecution by special prosecutors in the Iran-Contra affair. However, our official position diplomatically is still that the North started hostilities. Well of course they did. The South didn’t have a guerrilla army of terrorists trying to turn villages in the North. They didn't have an army on the border, poised to invade should the situation allow. But we still maintain that they were the aggressors in the Tonkin Gulf. Well, that’s debatable, but I don’t think Obama should go over there and apologize or anything.

I think this is the first time that the details of what was going on that night along the coast have been put into print.

MT:     Do you believe our escalation of the war was a good idea? Should we have remained purely in counter-insurgency mode?

DF:     In hindsight, we probably should have, or leaned very heavily on that strategy. If you look at the counter-insurgency effort in Vietnam it was incredibly successful. By 1973 when we began our withdrawal, the Viet Cong were finished. They were decimated to the point of nonexistence. (I'm pretty sure that’s the story my friend never got to tell me.)

There are a few reasons why it’s very understandable that we did not stay small, however, besides the cliché that generals always fight the last war. The North did have a regular army and did indeed make appearances on the battlefield. After the experience of the massive Communist invasion in Korea, it was not unreasonable to suppose the same thing could happen in Vietnam.

Second, our Special Forces were still in their infancy. The Army had been at it for some time, though they were basically formed to set up their own guerrilla armies behind enemy lines should the Soviets invade Europe. But turning that mission around was not a big stretch. The SEALs were (and still are) a far more aggressive strike force. But there had been about two SEAL classes graduated when this story takes place.

I don’t think it could have been completely small-unit, but the war was not suited to Big Army, which still doesn't do great in such conflicts. Vietnam was more like Afghanistan and less like Iraq in that way. In hindsight, probably Marines should have been the biggest force on the ground with a massive expansion in Special Forces, supported by the air. Kind of like what Bing West says in The Wrong War that we should have done in Afghanistan.

MT:     David, the book is a real page-turner and has revelations about a controversial topic. Why did you go the self-publishing route instead of pursuing a major publisher?

DF:     Well, thank you. They say this is the wave of the future in publishing. My friend Robert Ferrigno, whose great “Assassins” trilogy, about life in America after a future civil war and nuclear terrorist incident leads to Sharia law, were bestsellers, still went with on-demand online publishing with his next thriller, The Girl Who Cried Wolf.

However, I did go the old-fashioned route of looking for a publisher for a while. I actually went through several rewrites with an editor at a major publisher who was well known for launching the careers of a few huge novelists who write military fiction. As you know, editors don't take that kind of time with authors they don't intend to publish. Suddenly though, interest was just withdrawn. I don't want to say anything I don’t know to be true, but I was very suspicious about the 180 degree turnaround, as this publisher did have close ties to the military. But I can't say anything for sure.

So it’s my job to get the word out with people like you and see how it goes. It’s pure free enterprise.