The Geography of Hate 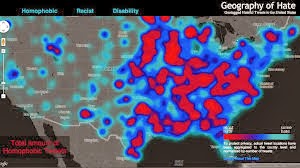 Dr. Monica Stephens, an assistant professor at Humboldt State University whose current work “surrounds geographies of gender, hate, and censorship online,” has undertaken a project to identify the geographic origins of online hate speech. The result is the Geography of Hate map. Check it out, says a writer at the Fast Company website, “if you’ve wondered where the truly hate-filled people in America live.” Well, not exactly.

For the data used to construct the map, Stephens gathered every “geocoded” tweet in the United States from June 2012 through April 2013 that contained one or more “hate words” that she categorized as homophobic (“dyke,” “fag,” “homo,” “queer”), racist (“chink,” “gook,” “nigger,” “wetback,” and “spick”), and disability (“cripple”). Apparently she is saving hate words targeting whites (e.g., “cracker” and its variants), conservatives (“teabaggers”), and black conservatives (“Uncle Toms”) and straight people (“breeders”) for a future map, because they weren’t considered for this one.

The total from that time frame amounted to over 150,000 tweets. But because “computers are poor judges of sarcasm,” Stephens says, “and Twitter is often used in sarcastic ways, or used to quote somebody else,” three of her students first had to read the entirety of each tweet to identify only the ones in which the key words were used in a pejorative sense (they weren’t interested in phrases, for example, celebrating “dykes on bikes #SFPride,” or “nigga” as a very common term of endearment among blacks themselves).

The map ended up showing where people tweeted those offending terms most often, aggregated to the county level. Where there is a larger proportion of tweets that include one of the aforementioned slurs, the region glows red on the map; where the word was used less often (although still more than the national average), the proportion is moderate and appears as pale blue. Areas without shading indicate places that have a lower proportion of negative tweets compared to the national average.

If you zoom in, you can see, for example, that parts of Iowa, Virginia, and Indiana have the greatest concentration of people tweeting the word “nigger,” and that there are higher numbers of people tweeting “fag” in Minnesota and Kentucky. “As you’ll note from the maps,” Stephens says, “racist and homophobic sentiment exists around the country and not just in red states.” [emphasis added] Notice her generalization (can we call it hate-filled?) about the residents of red states, her casual “progressive” assumption that conservative states would naturally be the national repositories of racism and bigotry. Hopefully her research will begin to disabuse her of that, but I’m not optimistic.

Rather than indicate “where the truly hate-filled people in America live,” the map more precisely shows where some people, who may or may not be truly hate-filled (which is a very strong accusation), merely tweet a specific set of slurs. It excludes a range of people who may be much more hate-filled but who don’t fit the project’s parameters. First, it obviously excludes anyone who isn’t on Twitter. It also doesn’t consider people who may not use slurs but are quietly plotting the next terrorist bombing. It certainly doesn’t include people like the New Black Panthers, who are gearing up for a race war.

Furthermore, Stephens’ research unsurprisingly neglected to catch vicious tweets directed at Christians, conservatives, straight people, law-abiding gun owners, pro-lifers, Sarah Palin, her Down Syndrome son, Michele Bachmann, her 23 foster children, Mitt Romney, his black adopted grandson, and other such targets of a shocking degree of leftist online venom. Now THAT would make an interesting map. But that will never happen in an academic setting.

Limiting the mapping of hate to a tallying of epithets circulating on Twitter offers a ridiculously narrow perspective. The assumption that slur words alone are an indication of where “hate” is localized is seriously flawed, and such tweets themselves (though they are ugly and may be hurtful) are largely impotent in the real world. The internet empowers countless posturing bullies who talk tough online but are cowards outside of their parents’ basement. The greater danger lies offline, from those who are more inclined to act physically upon their hate.

As one might expect from an academic project, the map doesn’t seem to serve much of a practical purpose beyond curbing free speech. How about drawing up a map that catalogs actual hate waged against actual victims? For example, what about mapping the hate exhibited in the sick Knockout Game, which is racist violence (let’s be honest about that, since neither the mainstream media nor Eric Holder’s office will be)? That might be useful in identifying where real hate resides, the kind we need to eradicate.

But as long as we’re focusing on “hate speech,” what about the hate emanating daily from the set of MSNBC, where its attack dogs like Melissa Harris-Perry, Ed Schultz, Martin Bashir, and Dean Obeidallah spew more venom than any red state hot spot? Their audience, embarrassingly small though it may be in comparison to, say, that of Fox’s Megyn Kelly, is much larger than that of any loser on Twitter, and has much greater impact.

The Geography of Hate map may be an interesting intellectual exercise for academics, but its narrow focus on ugly tweets renders it rather meaningless. Of course, the very concept of “hate speech” is questionable and flawed anyway, because who gets to define what constitutes “hate speech”? Why the left, naturally, which is why the left never finds itself guilty of said hate. That’s why Stephens’ research neglected to include conservative targets, a consideration that very likely never even occurred to her.