An Aesthetic Objection to On-Screen Nudity 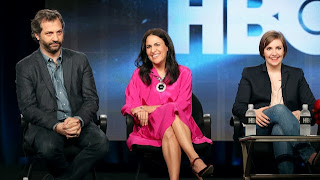 TV critic Tim Malloy riled up Girls producer Judd Apatow and star Lena Dunham in a recent interview when he asked them about the artistic reasoning behind her seemingly gratuitous nudity on the show. After attacking Malloy for his “offensive” question, implying that the critic was complaining about Dunham’s less-than-supermodel appearance, Apatow finally got around to defending the nudity as “more honest.” Honest? Perhaps, but is it necessary? When is nudity onscreen justified, and when is it gratuitous?

Some filmmakers like Apatow argue that people are often naked in real life, so nudity onscreen feels more realistic, more honest, as he puts it. But people also go to the toilet often in real life too; wouldn’t it be more realistic and honest to show that as well, even though it served no purpose in the scene? The reasoning shouldn’t be, “People do this in real life, so let’s show these characters doing it”; it should be, “People do this in real life, but if we show these characters doing it, will it advance the story, or will it simply take the audience out of their suspension of disbelief?”

An egregious example of unwarranted nudity is Halle Berry’s bare-breasted sunbathing in 2001’s Swordfish, which served absolutely no function in the story. It was included for no other reason than to stir up salacious attention for the film, and it shows. Berry reportedly was paid an extra $500,000 for flashing her boobs, and in all fairness, for that much money I’d expose whatever the director asked me to; but she claims the money was not a factor: “I did the scene because it showed you that the character was in control of her sexuality and very comfortable with herself.” If so, no one bought it. The scene is notorious for its comically blatant gratuitousness.

Oddly, Berry has also said, “I don't think nudity is ever necessary. I think you can make every single movie and never show anything and it’s fine.” I agree. Let’s be honest – anytime there is nudity onscreen, your brain says, “Whoa – there’s nudity.” It stops you in your visual tracks (if I may mangle a metaphor) and takes you out of the story, unless it’s there for a damn good narrative reason.

Then when is nudity on film appropriate and not gratuitous? Only when it makes emotional sense and offers insight into the character.

Two scenes that come immediately to mind are actually from the same movie – 1992’s Damage, starring Jeremy Irons and Miranda Richardson. In one scene, the young adult son of Irons’ character falls to his death from an upper floor hotel walkway after discovering his father in flagrante delicto with the son’s fiancée. The anguished Irons leaps from the bed and runs nude down the staircase, utterly indifferent to his public nakedness, to his son’s body. It is a painfully convincing expression of his character’s horror and guilt. It would have completely destroyed the scene had Irons stopped to throw on a hotel bathrobe, cinched it at the waist, and then hurried to check on his son.

In the other scene, Richardson, who plays Irons’ wife, is doubly wounded not only by her son’s death but by the cause of it: Irons’ infidelity. In grief and rage she bares herself before him and demands, “Was this not enough for you?” Like the other scene, this one is searingly real and the nudity does not take you out of the moment; on the contrary, it draws you into her pain.

My complaint about onscreen nudity is more aesthetic than moral. I’m not theoretically opposed to it any more than I am nudity in a Rodin sculpture or a Renoir painting. Just don’t toss it in for no better reason than the thin excuse that “people are naked sometimes in real life.”