The 4 Most Unhinged Responses to the Zimmerman Verdict 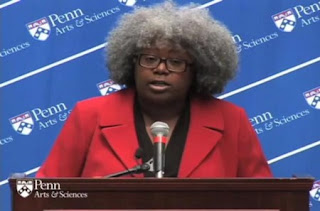 The recent George Zimmerman acquittal drew predictable responses from the race-obsessed left: death threats directed at Zimmerman, his family and the jurors; protests with signs provided by and promoting Communist organizations; violence and vandalism; and of course community organizing by race hustlers Al Sharpton and Jessie Jackson. But it also brought forth a few particularly irrational reactions. In no particular order of degree of insanity, here are four notably unhinged responses to the verdict, no doubt with more to come:

#1: “God is a white racist.” An online editorial declared that the Zimmerman verdict confirms that the Christian god not only hates blacks, but is actively walking around looking to shoot them:

As a black woman in a nation that has taken too many pains to remind me that I am not a white man, and am not capable of taking care of my reproductive rights, or my voting rights, I know that this American god ain’t my god. As a matter of fact, I think he’s a white racist god with a problem. More importantly, he is carrying a gun and stalking young black men.

Anthea Butler, who – and this will shock no FrontPage reader – is a professor of religion and Africana at the University of Pennsylvania, continued in that vein: “Their god is the god that wants to erase race, make everyone act ‘properly’ and respect, as the president said, ‘a nation of laws’; laws that they made to crush those they consider inferior.”

She’s partially right – the Christian god does want believers to treat people of all races equally and does want them to act properly and respect the law – but inexplicably, Butler considers that a bad thing. Apparently she would prefer a god that shares the left’s obsession with racial division and with mob lawlessness. She also seems confused about the fact that our laws were made not to “crush” the “inferior,” but to protect them.

Butler objects to “this pseudo-god of capitalisms [sic] and incarceration that threaten [sic] to take over our nation.” She goes on to claim that racism in America “has its underpinnings in Christianity and its history,” conveniently forgetting that the abolition of slavery and the civil rights movement have their underpinnings in Christianity and in American history. But of course, a balanced historical perspective is an undesirable quality in today’s academics, whose foremost specialty is always social justice.

#2. Boxer rejects the American flag: This doesn’t refer to Barbara “Call me Senator” Boxer, but to U.S. Olympic boxer Terrell Gausha, who began wearing the American flag in the 2012 London Games but was so disgusted by Zimmerman’s acquittal that he has vowed never to wear it again: “How can I wear my stars and stripes proudly in a country where they make a big deal out of Mike Vick fighting dogs, but not a young innocent black male’s life?” he asked in an interview.

If Gausha doesn’t think this country made a big deal out of Trayvon Martin’s death, then he’s taken one too many punches to the head. And sadly, America did not make a big enough deal of Vick’s sadism – not only does he make millions in the National Football League, but he even received a supportive call from President Obama, who also made a supportive statement on behalf of his honorary son Trayvon Martin, setting the stage for the racial hysteria surrounding the Zimmerman trial.

Gausha refuses to represent a “nation with so much racism and hatred.” In other words, he refuses to represent a nation where a jury of the accused’s peers came to a dispassionate decision based on the facts of the individual case, as opposed to one where lynchings are carried out to satisfy the progressive mob’s lust for violence.

#3. MLK in a Hoodie: Just when you think that the elevation of Trayvon Martin to sainthood can’t get any further out of hand, along comes this photoshop of Martin Luther King Jr. in a hoodie a là Trayvon, created by purported artist Nikkolas Smith and spread by Communist agitator Van Jones on Twitter. Like the Martin family attorney’s association of Trayvon with civil rights martyrs Medgar Evers and Emmett Till, this attempt to conflate him with MLK is a sickening insult both to MLK’s memory and to everyone who courageously participated in the real civil rights movement.

An agitated Alveda King, MLK’s niece, told radio host Andrea Tantaros, “I can almost promise you Dr. Martin Luther King Jr. would not wear a hoodie.” But that’s irrelevant to the left, who have a genius for creating false idols through iconic images (Ché t-shirts, anyone?).

#4. “Racism is our 9/11.” Like academics, MSNBC contributors are easy targets because they’re so transparent about their fact-free extremism; nevertheless Michael Eric Dyson deserves mention for his terrorism analogy for racism. His inarticulate rant peaks with this gem: “So, you know how you felt on 9/11? Yeah, that's how we feel when it comes to race… Not until, and unless, the number of white kids die that approximate the numbers of black and other kids who die, will America see.”

[L]ook, the reality is you got to act now. The president, you won the second term. You’re in office. You are ensconced. Do something courageous, bold, and helpful. Not only to African American people, but to America. Because unless we do this, white Americans and others will feel that this was a justifiable verdict, this is how things happen.

Actually, if Holder and Obama take further action against Zimmerman, all rational Americans will feel that our government is determined to blatantly subvert our legal process to get the trial result it wants in order to push its agenda of racial payback and social justice.

Whatever your opinion on the Zimmerman acquittal, whatever your politics, irrational responses like these serve no purpose except to heighten the hysteria, exacerbate racial tensions, and push us further down the road toward violent civil war.