From Nirvana to Soundgarden to the Special Forces 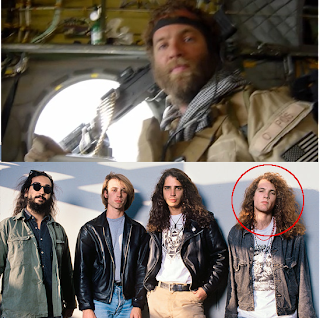 Last week the New York Times profiled a man who might otherwise be remembered – if he were remembered at all – as the Pete Best of punk rock, having twice lost his shot at being a rock idol. But Jason Everman went on to give more meaning to his life than fame and fortune ever could.

The troubled Everman first discovered music as a boy when playing around with his therapist’s guitar. That, and his subsequent discovery of punk rock, “was the first defining event in my life.” He went on to play in various bands during high school, ending up in Kurt Cobain’s pre-fame Nirvana. Who knows what a future that could have launched for him (Dave Grohl, anyone?)?

But Everman sank into a sullen cocoon, and Cobain fired the “moody metalhead.” By another stroke of fate, Everman ended up playing bass for Soundgarden, the most-idolized band on the Seattle scene. They were this close to the big time.

Something still wasn’t right. The road manager said, “He was funny and witty, and then a cloud would come over him. He would sit in the bus and be really mad with his headphones on all the time. I felt bad for the guy, and I feel even worse now, thinking about somehow he was suffering and nobody really knew how to address that.”

Everman’s attitude got him canned again. Then Soundgarden’s next album went double platinum, and Nirvana became the biggest band in the world. “It was a huge blow,” he admitted. “The only good thing about it was it made me leave the Pacific Northwest. I would never have done that otherwise.” That plot twist perfectly demonstrates how apparent failure can be a blessing that puts us on the right path.

He moved to New York and played with other bands, but didn’t want to end up as a loser who lamented lost opportunities. He “wanted to do something impossible.” He had been in the coolest bands, but now “I was psyched to do the most uncool thing you could possibly do.” So in 1993, at the age of 26, Everman got in shape, removed his nose ring, cut his hair, and joined the Army.

Everman was determined not to fail at boot camp. “I was 100 percent. If I wasn’t, there was no way I’d get through it.” Not only did he survive, he became an Army Ranger, which gave Everman a sense of belonging and purpose that he didn’t find in a band:

The bond of locking shields with each other, working together to defeat a common enemy, it’s a heightened state. Everyone looks around and you know — you know — something cool is going on here. I knew this was it. This is living.

He saw action in various international locales, which he doesn’t discuss. When his time as a Ranger was up, “I felt like I wasn’t finished with something.” He listened to that instinct, took things to the next level, and finally became a real rock star – as a member of the elite Special Forces.

Everman was still in training when the attacks came on September 11, 2001. “I don’t believe in fate or destiny, but I did feel a strange sense of kismet, which was probably more of just the right place at the right time. I guess I knew it was on, and I hoped that I would be prepared when it was time to go.” He went on to be deployed in both Afghanistan and Iraq.

Mythologist Joseph Campbell, of “follow your bliss” fame, used to state that “Life itself has no meaning. But you can give your life meaning.” As much as he loved music, Everman found purpose and his place not in the rarefied air of rock celebrity, but grounded in the humble, quiet anonymity of the heroic Special Forces.

Everman left the military in 2006 and went on, at 45, to earn a bachelor’s degree in philosophy at Columbia University. “The way I look at it,” he mused, echoing Campbell, “life is meaningless. The meaningfulness is what you impart to it.”