Rocking Out at Auschwitz – Yes, Auschwitz 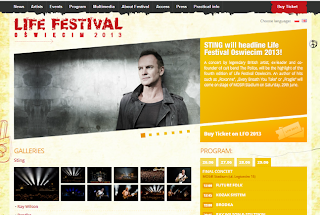 On June 29, singer/songwriter Sting, former co-founder and front man of the massively successful rock band The Police, and now one of the biggest solo artists in the world, headlined the Life Festival Oświęcim 2013 at Poland’s MOSiR Stadium in Oświęcim, which also just happens to be the location of Auschwitz. That’s right – there is now an annual rock festival literally within earshot of the most infamous testament to genocidal evil in human history.

Life Festival Oswiecim (LFO) was the brainchild of Darek Maciborek, a journalist who has lived his whole life in the little Polish town (pop. 41,000 as of 2006). Maciborek hoped to “break the spell” of his hometown’s morbid association with the Auschwitz-Birkenau Museum. Or as a Polish cultural guide explains, “The music festival was created to demonstrate that there is more to the small city of Oświęcim than just the Auschwitz concentration camp, and to create more positive connections in the minds of visiting tourists.”

While I think Maciborek’s heart is in the right place, I can’t help feeling that making those connections will end up reducing Auschwitz itself to simply another stop on tourists’ checklists:

Morning: Arrive in Oświęcim, get settled in hotel. Have lunch at the Polish equivalent of Denny’s.

Afternoon: Visit the site of the mass extermination of Jews and other Nazi undesirables.

“The main concept of the Festival,” says the LFO website’s About page, “is to build peaceful relations beyond cultural and state borders where there is no place for anti-Semitism, racism, and other forms of xenophobia.” Supposedly Sting accepted the invitation to play “mainly because of LFO’s idea – promoting the tolerance and peaceful co-existence of people representing different races, cultures, religions and nationalities.”

This is well-meaning, but if one of the festival’s goals is to bring awareness to the issues of intolerance, racism and anti-Semitism, Auschwitz itself already does a spectacular job of that. And the silence of Auschwitz says far more than ringing waves of amplified guitars.
Sting’s not the first major artist to perform at the Life Festival, which began in 2010. Peter Gabriel (“Sledgehammer,” “In Your Eyes”) headlined last year’s incarnation, and the year before that it was James Blunt (“You’re Beautiful”). Blunt incurred the wrath of many thousands of fans on that occasion when he posted a photo that could charitably be described as a bizarrely inappropriate joke about the location.

Sting has performed in the wake of horrific violence before. In 2001, he and his band were actually in the process of filming a private performance at his home in Italy when the 9/11 attacks took place. The sobering news prompted Sting to offer his bandmates the chance to back out if anyone wished, but all agreed that the show must go on. Sting dedicated the resulting album and the evening’s opening song – a somber version of “Fragile” – to the victims. That song’s plea for peace, however – “nothing comes from violence, and nothing ever could” – seemed aimed at preventing retaliation, but might have been better directed at the terrorists themselves instead.

Sometimes violence is necessary. Despite being lovers of great music, the Nazis weren’t defeated by singers at music festivals calling for tolerance and coexistence. They were defeated by overwhelming military power.

You can check out a video from the festival here, in which Sting performs his biggest hit and what has become his rousing concert-closer (despite the fact that the lyrics are the ominous promise of an obsessive stalker): “Every Breath You Take.” Though the crowd didn’t seem to mind, I can’t help feeling that rocking out to this upbeat anthem in the shadow of Auschwitz is, to put it in musical terms, tonally jarring.

It’s hard to condemn Sting and the festival’s other performers, though. Preaching peace and tolerance is what pop musicians do, even if they tend to gloss over the tough reality of ensuring peace and eradicating intolerance. It’s just a lot harder to enjoy the music if the musician is tone-deaf.