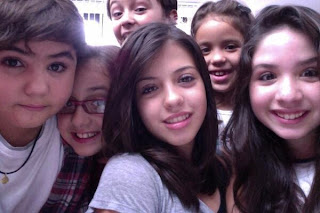 In a text-and-tweet-saturated world, where spelling and grammar are sacrificed for speed and spontaneity, young English-language students in Brazil are aiming to elevate our discourse by politely schooling American celebrities in the rules of writing on Twitter.

Red Balloon, Brazil’s leading English school for children, recently assigned students between the ages of eight and thirteen a fun task: scanning the Twitter feeds of their favorite celebrities for writing infractions, then gently correcting them via a school-owned Twitter account. The students first discuss the tweets with their classmates before offering their advice to the stars.

For example, when uber-celeb Kim Kardashian tweeted, “Up early getting ready to film Chelsea Lately today with the whole fam! Were taking over tonight!!!,” a Red Balloon fan responded, “You’re beautiful. I’m Ana Beatriz from Brazil, I’m 8. Look, you wrote Were, but it’s ‘we’re’. Kisses.”

When Justin Beiber tweeted, “That was a long bus ride. But we here,” another student replied, “My name is Maria, I’m 9 and I’m a fan from Brazil. Watch out: it’s ‘we’re here’ not ‘we here’. : )” Then she added an adorable picture of herself, as many of the other kids do in their responses.

When the athletically-gifted-but-intellectually-challenged Ryan Lochte sent out “Just herd NYC power went out?!?! Is that true,” one girl tweeted back, “Hi, I’m Louise from Brazil. I’m 9 and I love sports too! Look, you missed an A in ‘heard’. Best!”

What does this experiment accomplish, besides irking celebrities who prefer uncritical adoration to spelling instruction from foreign pre-teens? After all, these corrections aren’t likely to earn them a retweet or a “follow back” from the celebs, and Grammar Nazis don’t exactly command social media respect.

In a video about the program, Andrea Baena, school coordinator, points out that the essence of social media is near-instantaneous expression, not correct grammar. True – with a 140-character limit, the Twitterverse discourages carefully constructed, grammatically correct, fully expressed thoughts; instead, it encourages spontaneous, often punctuation-free and vowel-truncated, bursts of commentary laced with acronyms like “lol.” Accuracy is irrelevant; immediacy is everything. Factor in typos (and errant auto-correct in texting), and you’re left with streams of conversation that are illiterate enough to induce deep depression in English teachers.

Baena’s concern is that this is exacerbated online by “celebrities who are not really worried about the language,” which is an understatement. So what, you say? Celebs aren’t celebrated for their spelling. The problem is, as Baena correctly puts it, their influence on young fans: “When [students] see their idols speaking that way, they come to us and say, ‘But this is right. He’s American. He’s using it.’”

So Red Balloon engaged the students in a project that not only makes learning proper English fun, but enables them to teach it to others as well. And God knows celebrities need the instruction. When singer Mary J. Blige tweeted, hilariously, “Why is that people always try to understand estimate my intelligents?!,” thankfully a Red Balloon student came to the rescue with a polite correction.

It would take Baena’s entire class to correct rapper 50 Cent’s recent, barely coherent texting tirade against his 16-year-old son that included, sprinkled among the profanities, misspellings of words any 6-year-old should be able to spell (this is texting, not Twitter, but the same principle applies). Fiddy might argue that the only writing he needs to be able to do is to endorse his checks. But to reiterate Andrea Baena’s point, he is a role model for his fans (7.4 million Twitter followers) and for his own son, whose apparent illiteracy is symptomatic of too many Americans of his generation.

Realistically, the Red Balloon project is unlikely to enlighten many (if any) celebrities or anyone else on Twitter. But it’s a clever way for the school’s own students to enjoy and actively utilize their English language skills. Baena believes that even though her students are Brazilian and English is a second language, “It’s possible to have [her Portuguese-speaking] teenagers writing better than native speakers because they are [in school], they’re studying, they want their accuracy.” Now if only that enthusiasm for literacy and precision of language would rub off on more Americans – celebrities and fans alike.