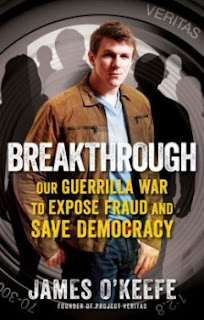 Ever since the late great Andrew Breitbart spearheaded a revolt against the monolithic, leftist mainstream media, the “citizen journalist” outside the mainstream has become a serious threat to the activist media’s complicity in political fraud and coverups. No one better exemplifies the spirit of citizen journalism than Breitbart’s young protégé James O’Keefe, who tells his story in the new book Breakthrough: Our Guerilla War to Expose Fraud and Save Democracy.

O’Keefe was only 25 when he shot to national prominence in 2009 as one-half (with Hannah Giles) of the undercover team that presented themselves as a pimp and his prostitute seeking advice from the helpful employees at ACORN on how to safely run a house full of underage El Salvadoran sex slaves. The undercover videos he shot at various ACORN offices exposed those employees encouraging the illicit business and offering tips on defrauding the government. The subsequent controversy marked the beginning of the end for ACORN, and the beginning of a new era in journalistic integrity.

O’Keefe, like his progressive opponents, recognized early on that law school is not the way to change the world – journalism is. And journalism in the Obama era has been all about protecting the progressive Messiah and furthering his agenda. “The nation’s progressives have been controlling the media narrative for a century,” he says, and “[m]any of these journalists [see] everything through a lens of ‘racial justice.” The way to break their stranglehold on that narrative, O’Keefe realized, is with the powerful evidence of hard-hitting, strategic video – like that taken in the ACORN sting by guerrillas outside the mainstream news media.

Regarding that sting, O’Keefe writes, “What our videos were doing was ripping a hole through [the media] narrative and allowing the people inside to expose that narrative for the fraud it was”:

In another era, or with a different target, every major newsroom in America would have unleashed its own Woodward and Bernstein to follow up on our work and track this corruption to its source, but that’s not the way the media roll if you’re investigating and exposing big government.

Realizing he was a threat, critics rushed to decry his unofficial status and modus operandi. He wasn’t a “real” journalist, they said. He was just a young “prankster” pulling a “stunt” – as if journalists suddenly decided that undercover video stings were immoral and beneath them. In fact, he was exposing not just ACORN but the big media who conspired to suppress the truth. “The beauty of video, especially as amplified by the internet,” O’Keefe explains, “is to allow a handful of citizen journalists working on a shoestring to end-run the biggest news organizations in the world.”

But he had no illusions about what this meant for himself and others like him. As a thorn in the mainstream media’s side,

[t]here would be no Pulitzers waiting for us at the end of the day, no speaking engagements at prestigious J-schools. Instead we would face a continuing blizzard of legal challenges, a swarm of snippy media crickets, and a tsunami of insider outrage at the slightest accusation of impropriety.

Ironically, the book that primarily inspired O’Keefe’s work is Saul Alinsky’s Rules for Radicals, the Bible of the radical left. As other influences, he lists Radical Chic & Mau-Mauing the Flak Catchers by Tom Wolfe, the last half of which is about hustlers fleecing the corrupt, hapless bureaucrats of San Francisco anti-poverty programs, and everything by British conservative G.K. Chesterton.

O’Keefe went on to become the founder of Project Veritas, which investigates and exposes “corruption, dishonesty, self-dealing, waste, fraud, and other misconduct in both public and private institutions in order to achieve a more ethical and transparent society.” The group pursues that aim by launching specific journalistic investigations and widely publicizing the results; conducting training workshops to teach others how to become modern-day muckrakers; and creating a method for the public to alert journalists of issues and institutions that need to be investigated.

His book also takes us along for the ride on other video stings: posing as a donor offering a race-based donation to a willing Planned Parenthood; his partners posing as representatives of a Muslim group offering a substantial donation to a conservative-hating National Public Radio exec; Medicaid fraud in offices in six states; New Jersey Teachers Union voter fraud; New Hampshire voter fraud; and a plan to commit voter fraud by the son and campaign director of Congressman Jim Moran.

Breakthrough’s chapters are essentially elaborations on O’Keefe’s guidelines for citizen journalism, what he calls the Veritas Rules, clearly inspired by Alinsky and learned sometimes through hard experience. Rule #3, for example, is “Use their own flawed construct to put them into a position where either way they can’t win.” Rule #19: “When the content is strong enough, the publicity will take care of itself.” Rule #22: “Expect to be held to a higher standard than Pulitzer Prize-winning journalists.” These rules, he writes, “are shaped by my larger vision to make the world a more virtuous place.”

O’Keefe is quick to clarify exactly how the little guys of citizen journalism upend traditional news media. “We [at Project Veritas] don’t have the wherewithal to discredit the media,” he says:

We merely scoop them. They discredit themselves by refusing to cover stories with national implications that much of America already knows to be news. Once discredited, however, the media do not apologize or reform. They dig in, knowing that their “competitors” have as much interest as they do in protecting the myth that the major media “really, really try to be unbiased.”

Breakthrough is a quick, easy, and compelling read – even an inspirational one for conservatives who are frustrated by the untrustworthy big media – about this empowering frontier of citizen journalism. “By showing what is true and what is not,” James O’Keefe concludes, “journalists can help forge a more ethical and transparent society.”