Observing 'The Lives of Others' 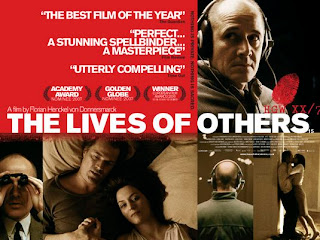 In the wake of recent revelations in the news about National Security Agency surveillance and government monitoring of phone records, the ominous terms “Orwellian” and “Big Brother” have been thrown about so often that Amazon.com sales of 1984, George Orwell’s classic tale of a totalitarian dystopia, jumped nearly 10,000%. Personally, the scandal doesn’t remind me so much of 1984 as it did of a gripping and affecting 2006 movie called The Lives of Others.

The debut directorial effort by a young German with the rather Monty Python-esque name of Florian Henckel von Donnersmarck, The Lives of Others is a Cold War drama set in the former German Democratic Republic (GDR) in the years prior to the earth-shattering fall of the Berlin Wall. The story centers on Capt. Wiesler, an agent of the Stasi, the ruthless secret police, who is conducting surveillance on state-approved playwright Georg Dreyman and his actress lover. Wiesler has been assigned to dig up subversive dirt on them and their circle of artist friends; instead, the Stasi agent gradually finds himself becoming sympathetic to their passionate appreciation of art and beauty, their yearning for self-expression, even their resistance to the all-controlling, all-knowing state. He ultimately puts his own life on the line to protect them.

For Americans who enjoy a degree of freedom unprecedented in history, and who take full advantage of our First Amendment right to openly heap criticism upon our leaders, it is thankfully impossible to grasp what daily life is like under the terrible oppression of a totalitarian state. Neighbors, friends, and even lovers on the wrong side of the Iron Curtain were encouraged – or threatened – to spy on each other, meaning absolutely no one could be trusted. A casual joke made at the expense of the state, overheard by the Stasi, meant the end of your career or worse. The slightest indication that you were less than totally committed to the socialist state meant brutal interrogation, imprisonment, possibly death.

The Lives of Others brilliantly and chillingly captures this oppression (although the movie did receive some criticism that it did not go far enough in its depiction of that ugly reality). When a neighbor sees Capt. Wiesler bugging Georg’s apartment, for example, Wiesler warns her to keep her mouth shut or her daughter will lose her place at the university. Georg’s friend, a blacklisted theater director, commits suicide after being condemned to never work again. His actress lover, who has already been coerced into sleeping with a government official, is further forced to inform on her beloved Georg or face the same oblivion as the dead theater director.

The winner of armloads of awards including the 2006 Oscar for Best Foreign Language Film, Lives was not only von Donnersmarck’s first feature film, it was also his first feature screenplay, which he wrote in the seclusion of his uncle’s abbey in Heiligenkreuz, Austria. Coincidental trivia: while backpacking through Europe many years ago, I actually stayed for a few days in that beautiful abbey, the oldest continuously occupied Cistercian monastery in the world. More trivia: Von Donnersmarck was later named one of Oxford University’s 100 most notable alumni in its ten centuries of existence; that puts him in the company of figures like St. Thomas More, Lawrence of Arabia, Oscar Wilde, and Stephen Hawking. Not bad.

A consultant on The Lives of Others was the Wende Museum in Los Angeles, which houses the world’s largest collection of Cold War artifacts (“wend” means “turning point,” and was the word Germans used to refer to the collapse of communism). Nearly 75% of the more than 70,000 objects in that collection originate from the GDR, where the movie is set. It has a vast amount of Stasi surveillance equipment, which is chilling to examine. You can almost hear the ghostly echoes of tapped phone calls, or of secretly recorded conversations that damned many.

You can count on one hand the number of films that confront the reality of communism without moral equivalence. Hollywood films about the Cold War focus instead on our paranoia and McCarthyism, like Good Night and Good Luck, or on the nail-biting brinkmanship of nuclear war, like Fail Safe. It took an outsider, a German director to capture the soul-crushing oppression of life under totalitarianism, and to remind us how precious is the freedom to live lives of our own.