Hong Kong Without a Net 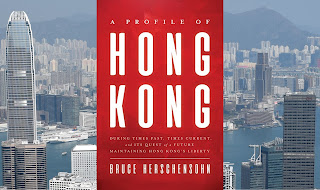 Before the news media focused everyone’s attention on Ukraine as the world’s flashpoint of democracy in peril, that flashpoint was rightfully centered on Hong Kong, where a courageous pro-democracy movement rebelled against the oppressive, communist Chinese regime. That rebellion is still ongoing, and still being suppressed. Just this week, Joseph Zen Ze-kiun, retired Cardinal Bishop of Hong Kong and one of the world’s leading human rights activists, was arrested in Hong Kong with three others as trustees of an organization that helps local democracy activists pay their legal fees. The trustees’ crime was “collusion with foreign forces,” part of a new security law implemented last year by Beijing to crush the protests in the former British colony, which has been under Chinese control since 1997.

Few Western conservatives can write as intimately and knowledgeably about Hong Kong and its people as the late writer Bruce Herschensohn, whose final book has just been published by Beaufort Books*. A Profile of Hong Kong, subtitled “During Times Past, Times Current, and its Quest of a Future Maintaining Hong Kong’s Liberty,” is composed of Bruce’s personal reflections upon, and historical analysis of, one of the most highly-developed, densely-populated cities in the world, one in which the people yearn for freedom from the communist yoke and look to America as their inspiration (you will recall that the protesters in 2019-2020 waved the Stars and Stripes and sang “The Star-Spangled Banner” together). His insights stem from 37 trips to Hong Kong made annually from 1960 through the British handover of the city in 1997, and they include his thoughts on what he calls “the frightening days and nights” when thousands of protesters were arrested and many brutalized by excessive police force.

The extraordinarily accomplished Herschensohn had a long and distinguished career in political analysis as a senior fellow at Pepperdine University School of Public Policy, former Distinguished Fellow at the Claremont Institute, Fellow at the Nixon Center for Peace and Freedom, and former Fellow at Harvard’s John F. Kennedy Institute of Politics. He received the Distinguished Service Medal, served as Deputy Special Assistant to President Nixon, was selected as one of the Ten Outstanding Young Men in the Federal Government, traveled to over ninety countries, and even worked with Nobel Prize-winning Soviet dissident Aleksandr Solzhenitsyn. He authored such books as An American Amnesia: How the US Congress Forced the Surrenders of South Vietnam and Cambodia; Above Empyrean: A Novel of the Final Days of the War on Islamic Terrorism; and the 2012 book Obama’s Globe: A President’s Abandonment of US Allies Around the World, a concise and hard-hitting indictment of former President Barack Obama’s disastrous foreign policy (which I reviewed for FrontPage Mag here).

Herschensohn passed away in December 2020 and was eulogized at FrontPage Mag by Horowitz Freedom Center President Michael Finch, who wrote this of the conservative stalwart:

What many don’t remember or know about Bruce is that he was also an Academy Award-winning filmmaker, wrote classical music scores, was a longtime teacher of politics, most recently at Pepperdine University, and served under four Presidents: John F. Kennedy, Lyndon Johnson, Richard Nixon as a Deputy Special Assistant, and as part of Ronald Reagan’s transition team in 1980. He also was the author of numerous books and countless articles during several decades as a columnist.

Most of all, Bruce was simply one of the kindest, humblest, and nicest people that one could meet. He was the epitome of class, always with a positive outlook on life and a kind word.

Those characteristics, as well as Bruce’s compassion for the Hong Kong freedom-lovers whom he calls “the angels of our times,” are in evidence on virtually every page of A Profile of Hong Kong. “The inhabitants of Hong Kong prove on a daily basis that no one knows better what to do with liberty than those who have lived under an absence of liberty,” he writes.

Herschensohn’s short but densely informative book begins, as the chapter heading indicates, “Looking Centuries Back in Hong Kong” and progresses through the city’s uniquely interesting history up to the aforementioned pro-democracy protests in 2019-2020. In short chapters along the way he covers such topics as “The Cultural Revolutions of 1966-1976,” “Margaret Thatcher vs. Deng Xiaoping,” “How Hong Kong Became a Beacon of Liberty,” “The Tiananmen Square Massacre,” “The Midnight of Broken Promises” detailing the sorrowful British handover of the colony to the Chinese regime, and the period thereafter when the territory lacked the underpinning of Western support, in “Hong Kong Without a Net.”

Amid his recounting of Hong Kong history are such gems as details of the Tiananmen Square massacre and what he calls “one of the most incredible end-of-a-war stories ever to take place”: the tale of a flag of Great Britain hidden by a British citizen when Hong Kong fell to the Japanese on Christmas Day 1941. The citizen was sent to a prisoner of war camp but in August 1945 escaped, retrieved the flag, and raised it in defiance of the Japanese occupation. As it turns out, and as Herschensohn explains, that act saved Hong Kong for the British, and had it not, Hong Kong’s “triumph of freedom and free enterprise, including the most magnificent skyline in the world, would never have existed.”

Regarding present-day Hong Kong, Bruce laments that “those who are currently [in 2020] being taken through the streets of Beijing are being sent to be ‘tried’ for ‘crimes’ against [President] Xi Jinping’s demands.” They are “the angels of our times” who “cherish future liberties for all Hong Kong people and for all those who want to join them in being free without… liberty ever being taken away again.”

In the epilogue Bruce closes the book with an expression of gratitude to its readers, and an endearing apology: “If I editorialized at times within this book, I am sorry.” Then, in an amusing afterthought a few pages later: “But not very sorry.”

As Beaufort Books publisher Eric Kampmann notes at the beginning of the book, he “had complete trust that [Herschensohn] would bring respect, discernment, and expertise when telling Hong Kong’s turbulent story.” And he certainly did. To understand where the territory stands today and where it may be headed, anyone who cares about the fate of those pro-American, pro-capitalist Hong Kong protesters risking their lives for freedom, must begin with Bruce Herschensohn’s slim but enlightening book, A Profile of Hong Kong.

* Beaufort Books will generously donate 50% of the book’s net proceeds to a scholarship fund in Bruce Herschensohn’s name.