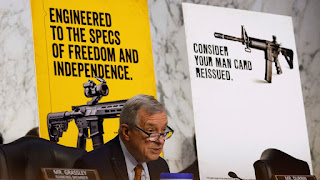 In opening comments Wednesday for the Senate Judiciary Committee hearings on so-called “assault weapons,” Democrat Senator and gun-confiscation enthusiast Dick Durbin threatened that it is “time to name and shame” the makers of AR-15s, the rifle Democrats have demonized as “weapons of war.” Gun manufacturers aren’t the trigger-pullers behind mass shootings, but they are a much easier and more politically useful scapegoat to target than the criminally insane minds of the actual shooters. Democrats aren’t interested in ending gun violence anyway; if they were, they would be holding hearings on the shootings perpetrated by gang members in Democrat-run inner cities, by terrorists, and by the criminally insane. What they want to end is not gun violence but gun ownership.

Sitting with posters of AR-15 advertisements placed prominently behind him, Durbin claimed hyperbolically that there have been “309 mass shootings” in the United States so far in 2022. “Why are these killing machines flying off the shelves after they were banned for a decade, until 2004?” he asked rhetorically. "Maybe it’s the ads that market the ‘assault weapons.’ Symbols of independence, freedom, or the promise that owning an AR-15-style-gun will make you more of a man. Or could it be the enticing prospect of toting around the same style of weapon that soldiers and Marines use to defend our country in combat?"

Let’s break down this sneering statement, because it is very revealing of the Left’s perspective on guns and masculinity, both of which the Left would like to eradicate.

First of all, there is the obvious propaganda of the loaded (pardon the pun) terminology like “killing machines” and “assault weapons” to refer to tools that are more often used to stop or prevent killing and assaults. Second, what's wrong with an advertisement and a product that appeal to one’s desire for independence, freedom, and the capability to defend one’s home and community? Nothing to the average American patriot, but they run against the grain of the average leftist’s totalitarian impulse for control.

As for owning an AR-15 making you “more of a man,” Durbin meant it as a taunt to suggest that male gun owners are insecure about their masculinity. But in fact – and this assertion will cause the heads of feminists and proud non-binary types to explode – owning a firearm actually does make one more of a man. One of the universal duties of manhood is to fulfill the role of protector. Having the capability (such as a firearm), the training, and the will to stand up and protect your life, your loved ones, your property, and your community is a clear marker of moral masculinity. Not in the swaggering way of someone looking to pick a fight, but in the quiet strength and confidence of a man who understands, respects, and is capable of wielding the power of righteous force. In that sense, owning a firearm and being trained and ready to use it when necessary does indeed make you more of a man than someone who willfully abdicates that responsibility.

(Female gun owners benefit from a similar independence and empowerment, but Durbin didn’t mention women because his aim was to diminish and humiliate predominantly male gun owners.)

Democrats despise masculinity, especially moral masculinity, which is why the tip of the spear of their neo-Marxist revolution is gender ideology – the eradication of traditional sex roles and even of the biological reality of male and female. (The only arena in which toxic masculinity is acceptable to the Left today is in women’s sports.) They fear and despise men’s inherent warrior spirit because it is the most elemental barrier to their totalitarian agenda. They fear and despise the fact that the constitutional right to own a firearm empowers you to fulfill your responsibility as a man, to maintain your freedom as an American, and to defend the lives and freedom of others.

As for Durbin’s comment about “toting around the same style of weapon that soldiers and Marines use to defend our country in combat,” civilians aren’t, for the most part, using the same weapons as the military. That having been said, owning “weapons of war” is precisely the point of the Second Amendment, which is to empower civilians to defend themselves against government tyranny. Democrats know this full well but try to skirt around it by pretending the issue is hunting. That’s why they make silly, seemingly irrelevant declarations like former New York governor Andrew Cuomo once did, that “no one needs ten bullets to kill a deer.” Or even more embarrassingly, decrepit Joe Biden’s 2019 pronouncement that “if you need 100 clips or 30 clips in a weapon, then you shouldn’t be hunting, man!”

As is often noted by conservative commentators, mass shooters aren’t National Rifle Association members who value their freedom and independence and right to bear arms. They are mostly homicidally/suicidally angry young men whose problems run far deeper than just being enticed by advertisements. Indeed, if they're being enticed by anything to commit gun violence, it's by a leftist-dominated news media that thrives on turning mass-murdering losers into overnight celebrities.

But Durbin and his fellow Democrats don't care about getting to the real, cultural roots of the problem of gun violence. Their aim is to roll back, if not eliminate, the Second Amendment and to disarm the populace. Toward that end, Democrats want to punish firearm makers. So Durbin blames “the marketing tactics used by gun manufacturers like Mossberg, Bushmaster, and Daniel Defense. It’s time to name and shame these companies,” he stated ominously.

Last weekend, 22-year-old Elisjsha Dicken stopped a mass shooter at Indiana’s Greenwood Park Mall by taking him out with a handgun within seconds of the shooter launching his rampage. In a sane world, Dicken would be unanimously hailed as a hero. And sane people have hailed him as such. Greenwood Police Chief Jim Ison said of Dicken, “I’m going to tell you, the real hero of the day was the citizen that was lawfully carrying a firearm in the food court and was able to stop the shooter almost as soon as he began.”

But instead of being grateful and relieved that Dicken’s courage, skill, and concealed-carry weapon limited the murderer to three victims (still a terrible loss, but it could have been exponentially worse), Democrats openly resent the fact that Dicken is living refutation of their false narrative that a “good guy with a gun” is a myth. They have taken to social media to condemn him, for God’s sake, as an “armed vigilante” and to grumble that, as journalist David Leavitt stupidly tweeted, “You’d never need a ‘Good Samaritan’ with a gun at Greenwood Park Mall or at any other place if there weren’t any guns to begin with.”

And that is the Democrat fantasy: an America in which there are no guns (except, of course, those belonging to the government, to the privately-funded security teams of anti-Second Amendment celebrities, and to the taxpayer-funded security teams protecting Democrat politicians). And no men either, at least those who exhibit the dangerous, moral masculinity of an “armed vigilante” like hero Elisjsha Dicken.