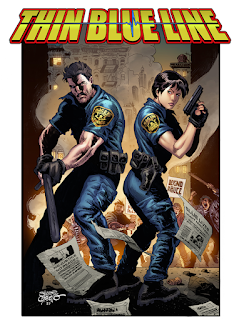 Writing last month in the New York Post, Manhattan Institute Fellow Heather Mac Donald noted that even the Biden Justice Department has finally acknowledged there is a war on cops underway in America.  FBI Director Christopher Wray declared on CBS’s 60 Minutes that in 2021 there was a 59% increase in cop murders – nearly one every five days – driven by what Mac Donald calls “a national rhetoric of cop hatred and racial animosity.”

In this hostile environment, comic book writer and artist Mike Baron (The Flash, Nexus, Star Wars, and The Punisher), winner of two Eisner Awards (the comic industry equivalent of the Oscars) teamed up with active-duty police officer Joseph Arnold (on pencils and layouts) and illustrator Jeff Slemons to create Thin Blue Line, a police-positive graphic novel which follows officer Valeria Baca and her partner Bob Mack as they fight for their community and their own survival amid rioting in the streets.

“It’s not polemic, and definitely isn’t a cop recruitment book,” Baron noted. "It’s just a thrilling action drama, similar in many ways to elements my fans may recall from the five years I wrote The Punisher, which were grittier and more realistic than most mainstream superhero comics.”

I wrote previously for FrontPage Mag, last November, how Baron chose to crowdfund the project after the concept was rejected by major publishers, who were repulsed by a story line that presented cops as heroes rather than villains. Since then, the response on its Indiegogo page was tremendous. Thin Blue Line earned nearly three times its goal.

“I was shocked at how easily we beat our modest crowdfunding goal,” editor Chris Braly says. “Mike's fans, as well as the law enforcement community, came out in a big way on Indiegogo. We’re at the printer now and expect to ship in mid-June. Latecomers still have a chance to own a first printing of 'Thin Blue Line' by visiting thinbluelinecomics.com and grabbing a copy of what’s destined to be a VERY rare comic.”

The book’s penciller Arnold, a police officer, added, “I was eager to show another side of policing. The story emphasizes family, interpersonal dynamics, and shows police officers from many different backgrounds. I've put my heart into every page, and hope it has a positive impact on policing.”

Mark Tapson: Mike, can you flesh things out about Thin Blue Line for readers – its storyline and characters, and your purpose behind creating it?

Mike Baron: Thin Blue Line is about two cops trying to survive a night of riots. It was inspired by the summer of 2020 where dozens of cities were under siege, thousands of small businesses destroyed, hundreds murdered, millions in damages, and out front, a proud news reader explaining these were “mostly peaceful” protests. Then tapeworms, by which I mean people who have seized power through demagoguery, called for defunding the police. My reaction was, “What the fuck?” You're either for the rule of law or you're not. Without the rule of law we have...we have what we had in the summer of 2020.

MT: Tell us about the support you received from law enforcement, and by contrast, what happened when you, a longtime successful veteran in the field, approached publishers about the concept?

MB: Police officers contacted me from all over the country expressing gratitude. It was inspiring. We submitted the book to over a dozen publishers and the responses ranged from “not our brand” to “fuck the police.”

MB: After I appeared on Fox News, we did very well. Many publications expressed interest as well, including FrontPage Mag, The Federalist, the National Police Association, and some others.

MT: Tell us what you did on behalf of Thin Blue Line for National Police Week, which runs from May 15-21.

MB: We gave thousands of dollars to three charities: Adopt A Cop BJJ, which trains officers in Brazilian Jiu-Jitsu; the National Law Enforcement Officers Memorial Fund, which improves officer safety and honors the fallen; and the National Fallen Officer Foundation, which helps families of officers slain in the line of duty.

MT: That’s a testament to your respect for law enforcement. What’s the latest on Thin Blue Line and when can readers get hold of it?

MT: Congratulations, Mike, we’ll be looking forward to it.