The Totalitarian Legacy of the Bolshevik Revolution 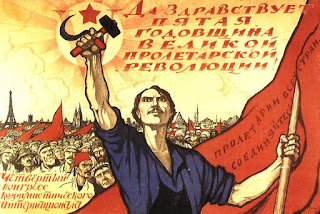 Two years ago, on the centennial anniversary of the Bolshevik Revolution in Russia that ushered in a century of mass murder and misery, the Trump administration declared a National Day for the Victims of Communism. The New York Times, meanwhile, predictably celebrated the blood-soaked milestone with a series of opinion pieces touting the many upsides of Communism, such as better orgasms for women. The series was titled, with stunning tone-deafness, “Red Century.”
Also on that anniversary in 2017, Bucknell University, a private liberal arts college in Lewisburg, Pennsylvania, held a symposium titled “Legacies of the October Revolution,” organized by Bucknell professor of sociology Alexander Riley and associate professor of English Alfred Kentigern Siewers. That symposium spawned an important new book titled The Totalitarian Legacy of the Bolshevik Revolution, edited by Riley and Siewers and featuring essays from three participating scholars. Contrary to the New York Times’ whitewashing, the book’s evaluation of the October Revolution is unequivocally damning.
“Now, a century later, the historical evidence on the nature and legacy of the Bolsheviks and the regime they established is indisputable,” writes editor Riley in the foreword, “Challenging Bolshevik Myth and the Poetry of Totalitarianism”:
None of the utopian goals to which they purported to aspire – the end of inequality and want, an efflorescence of humane cultural values, a more just and democratic social order – were realized. Instead of these noble ends, the Bolsheviks produced the world’s first totalitarian state, a one-party dictatorship whose political power rested almost entirely on the threat and frequent implementation of mass violence.
It gets harsher from there. The book’s essays by a trio of scholars offer “a summary analysis of the historical record books on the Bolshevik reign of terror, a working hypothesis on what produced the distorted and malevolent ideologies and practices that sustained Bolshevism, and an effort at understanding how considerable numbers of intelligent and conscientious individuals could have come to believe such intrinsically unbelievable things” about it, Riley writes.
In the first of three brilliant essays, “Lenin and the Bolshevik Revolution: The Invention of Totalitarianism,” French historian and former Maoist militant Stéphane Courtois, author of more than 30 books on communism and totalitarianism (including lead authorship of the essential work on global communism, The Black Book of Communism), undertakes to explain how Vladimir Ilyich Ulyanov, aka Lenin, became the founder of totalitarianism. Courtois demonstrates that Lenin shared with his successor Stalin “the same merciless, amoral, dehumanizing view of political opponents.” It is a strategy familiar to anyone who has been demonized by today’s Democrat Party.
Courtois concludes that the revolution was catastrophic not only for Russia, but for Europe, where “Lenin and Stalin greatly facilitated Hitler’s rise to power in 1933,” and for the whole world through the spread of Communism to Asia, Africa, and Cuba. And now “this totalitarian model has since migrated from a moribund Communism to a triumphant radical Islamism,”  a “disastrous legacy” which is “affecting the entire planet.”

In the second piece, “The Russian Revolution and the Soviet System: Assessments, Impact, and Western Perceptions,” Hungarian-born scholar Paul Hollander explores the nature of the Bolshevik Revolution, the attraction it holds for Western intellectuals, and the reason for its eventual collapse. He points out the religious impulse underlying the revolution, which promised paradise on earth – what Thomas Sowell has called “the quest for cosmic justice.” Hollander quotes Bertrand Russell as saying that “Bolshevism is not merely a political doctrine; it is also a religion, with elaborate dogmas and inspired scriptures.” (David Horowitz has often noted that Progressives – rebranded Communists – are not merely political activists but religious fanatics.) As Alexander Riley puts it in his foreword, “All the injustice of the old world is to be undone by the totalitarian moralizing leader and government, and so these figures and their regimes are praised as religious saviors and heavens on earth.”
Historian Ron Radosh, professor emeritus of history at the City University of New York and a friend of (and former fellow traveler with) David Horowitz before their political conversion from radical left to right, is the author of the third essay, “Soldiers for Stalin: Why American Communists Betrayed Their Own Country and Spied for the Soviet Union.” In it he tells the story of such “soldiers of Stalin” as Whitaker Chambers, Alger Hiss, and Julius and Ethel Rosenberg, who all believed they were helping their own country by helping the Soviet Union create a peaceful world community. “They proved by their actions that they were patriots – but Soviet patriots, not American ones,” Radosh concludes. “Their actions prove the lengths to which some Communists and fellow travelers went when guided by ideology.”
Editor Siewers closes the slim (but dense with ideas) volume with an afterword titled, “The Valley of Dry Bones: Towards a Rhetoric of True Resistance,” in which he argues that the contributors to the book “represent the most vital genre of modern literature: A rhetoric of resistance to totalitarianism,” to the self-destructive nihilism of Communism. They stand on the shoulders of such giants as Slozhenitsyn, Orwell, Arendt, and Dostoevsky in a resistance to the collective, willful amnesia too many of us have embraced a century after the brutal execution of the Russian royal family (at Lenin’s command).
As evidence of this “great forgetting” and the staying power of Bolshevik myth, editors Riley and Siewers cite the left-leaning obstruction they themselves experienced organizing the symposium that gave birth to this book: “When we solicited material support from university departments for the events, some members of one department attacked what they viewed as our intrusion into a topic they claimed as exclusively their own, though not a single member of that department publishes on the Russian Revolution… Not content with accusations about our intentions, their department mocked our request for support by pledging the sum of… $19.17,” a reference, of course, to the year of the October Revolution.
After the event, another group of colleagues complained to a faculty discussion board that the symposium’s participating scholars were mere “narrow ideologues” who lacked the proper perspective on the topic. In another response, colleagues wrote a letter cheering Bolshevism and Lenin as models for contemporary social revolution. “Seemingly of no importance in our colleagues’ vision of the proper way to mark the centenary was the investigation of the political methods by which tens of millions of human beings were put by Lenin’s policies and his secret police into a condition in which they would never dream of anything again,” Riley states.
The editors go on to note that although it may be “hard to believe that there can still exist such aggressive defenders of Lenin and his revolution in this day and age,” such intellectual delusions about the Bolshevist Revolution dominate the Bucknell campus and extend far beyond it, which makes The Totalitarian Legacy of the Bolshevik Revolution and its authors and editors all the more essential to resist the great forgetting.
From FrontPage Mag, 12/16/19
at 10:05:00 PM