The Truth is No Defense 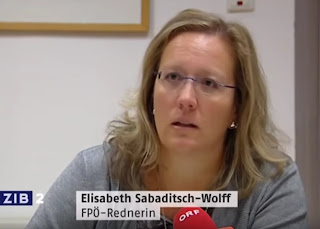 As the totalitarian left advances ever more successfully toward amending or abolishing freedom of speech, it is crucial to keep in mind that hand-in-hand with curtailing the speech of those who hold “incorrect” opinions comes the enforcement of Islamic blasphemy laws, the ulterior motive of which is to shield Islam from any criticism whatsoever. This has been the longstanding goal of the Organization of Islamic Cooperation, the world’s largest Muslim collective, which has worked closely with leftist allies such as Hillary Clinton to promote and implement such censorship. This already has been largely embraced among the multiculturalist elites in Europe; think, for example, of today’s England, where jihadist stabbings are rampant but complaining about them in a tweet will earn you a visit and stern lecture from the police, if not actual arrest.
To grasp just how unacceptable it is to speak the truth about Islam in a multiculturalist society, read Elisabeth Sabaditsch-Wolff’s jaw-dropping account of her legal ordeal in Austria, titled The Truth is No Defense, recently published by New English Review Press. Ms. Sabaditsch-Wolff is an Austrian human rights and anti-sharia activist who, as the daughter of a diplomat and then later as an ambassador’s assistant, had extensive experience living and working in Muslim countries (she was even held hostage during the Iraqi invasion of Kuwait). She came to the unfortunate conclusion that sharia and Western values aren’t compatible.
In 2009 she found herself charged with “hate speech” in Austria over factual statements she made during a seminar she gave on Islam. Thus began a Kafkaesque legal odyssey resulting in her conviction for “denigrating the teachings of a legally recognized religion” – i.e. Islam, of course, because can anyone imagine that someone would ever be convicted of denigrating Christianity? Ms. Sabaditsch-Wolff subsequently took her appeal before the European Court for Human Rights, but Europe tragically has no First Amendment and therefore, “the truth is no defense” when it comes to critiquing Islam. “This is what totalitarianism looks like,” the Freedom Center’s own Robert Spencer has said of her miscarriage of justice (Spencer is one of more than half a dozen notable experts who present insightful analyses of her case at the book’s conclusion).
Ms. Sabaditsch-Wolff was recently in Los Angeles promoting her book, and graciously made the time to answer some questions.
Mark Tapson:           You preface the book by juxtaposing the lives of two 9-year-old girls, “Emma” and “Aisha,” who might be very much alike except for the contrasting cultures in which they live: Western and Islamic. Why did you choose to begin the book this way?
Elisabeth Sabaditsch-Wolff:        I chose these two girls and their stories for one reason only: there are millions of Aishas in the Islamic world and millions of Emmas in the Western, non-Islamic world. We still have a choice: do we want the Emmas to turn into Aishas? Or do we protect the Emmas from a life as Aishas? My choice is clear. What is yours?
MT:     When did you first realize that, for the multiculturalist European elites who are determined to shield Islam from criticism, the truth is truly no defense?
ESW:  My realization that the truth is no longer a defense came when, during the proceedings, the judge at her own discretion added the charge of “denigrating the teachings of a legally recognized religion.” It did not matter that what I had said in the seminars was nothing but the truth, this truth was during the appeal considered “an excess of opinion.”

MT:     You tell a story of your time in Kuwait when you asked a young Kuwaiti woman, who was about your age, a question about her abaya, her Islamic garb, and you write that her answer has guided your criticism of Islam ever since. Can you tell us about that?
ESW:  This Kuwaiti woman indeed has guided my criticism in that I believe we are making a grave mistake in thinking that the hijab (headscarf) or even the abaya (the full garb) is just a piece of clothing. It is not. It is a way of life, a part of a Muslim woman’s body. Demand she take it off and you essentially chop off a part of her body. There is no compromise when it comes to women’s Islamic clothing: either it is prohibited or it is allowed, which in turn allows a non-Islamic country to gradually turn into an Islamic country. Just look at European cities like London, Brussels (especially the suburb of Molenbeek, the Jihadi capital of Europe) or Berlin (with its now-rampant anti-Semitism). The hijab paved the way for the Islamic revolution in Iran in 1978 and 1979; it has been doing the same in Europe for more than two decades.
MT:     You mention that your experiences living in Islamic countries had already convinced you there was something seriously wrong with Islam, but what really “red-pilled” you was Gabriel’s Whisperings by Jaya Gopal, a book about Islamic doctrine that you read in 2006 or 2007. Can you briefly describe what you learned that so terrified you?
ESW:  I was terrified that everything I had experienced in the Islamic countries I lived in, what I thought was “just” a human abnormality was actually rooted in Islamic doctrine. For instance, I knew and had seen many Muslims who do not like associating with non-Muslims, but also Muslims of non-Arab origin, but to find out that this is part and parcel of the Islamic religion shocked me deeply.
MT:     You end the book on a note of optimism and Churchillian determination, but considering the rising tide against the First Amendment here in the United States, how optimistic are you that America will remain a beacon of free speech for the world?
ESW:  I am optimistic only because America still has the freedom to fight for freedom, as my friend Eric Metaxas so succinctly phrases it. America, together with Israel, is the world’s last hope. America’s freedoms are the gold standard of freedom. Therefore, America must not fall. My deep hope is that in 2020, the American people will vote with this knowledge in mind. Freedom-loving men and women depend on you!
MT:     What is the next stage for you in carrying on this fight, and what can ordinary American citizens do to fight for their own freedom of speech?
ESW:  Legally, the fight in Europe is over for me. I have done my part and I have lost, to the detriment of Europeans’ free speech rights. My focus now is on America, to educate Americans about their First Amendment and its importance. I stand side by side with you, the American people, to fight for your freedom of speech because your loss is also my loss. America must not fall as we in Europe has fallen. You still have your freedoms and you must exercise your God-given rights to freedom! Do not take them for granted, ever!
From FrontPage Mag, 12/6/19
at 10:11:00 PM