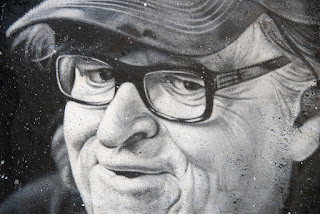 Documentary propagandist and anti-white racist Michael Moore is a one-man hate group, the kind that would be relentlessly targeted by the Southern Poverty Law Center if only his hatred didn’t align so closely with theirs. Instead, the leftist smear organization is ardently devoted to demonizing pro-American standard bearers of freedom like the David Horowitz Freedom Center, FrontPage Mag writer Daniel Greenfield, and Jihad Watch’s Robert Spencer. Meanwhile Moore is given a pass not only by the SPLC, but by the Democrat Party at large which also happens to be aligned with his divisive views.
You may remember that Moore rose to prominence and wealth as a leftist activist thanks primarily to his enormously successful documentaries Bowling for Columbine and Fahrenheit 9/11, both wildly popular among the America-hating film snobs at the Cannes Film Festival, and both riddled with falsehoods and distortions. The late iconoclast Christopher Hitchens, for example, excoriated Fahrenheit 9/11 at Slate in his inimitable style: “To describe this film as dishonest and demagogic would almost be to promote those terms to the level of respectability. To describe this film as a piece of crap would be to run the risk of a discourse that would never again rise above the excremental.”
Speaking of excremental, Moore also authored a handful of books of leftist disinformation, including the bestselling Dude, Where’s My Country? and Stupid White Men. The latter predictably laid the blame for all of the world’s ills at the feet of Moore’s titular targets. He has since gone on to turn flogging white men into a career revival now that his more recent documentaries have flopped, Donald Trump has supplanted Barack Obama in the Oval Office, and anti-white racism has become culturally acceptable, if not celebrated.
In his most recent incitement of hatred against white men, Moore stated in a video interview with Rolling Stone magazine published last Tuesday that white men who voted for President Trump are “not good people” and that others “should be afraid of them.”
“I refuse to participate in post-racial America,” Moore declared. “I refuse to say because we elected Obama that suddenly that means everything is OK, white people have changed. White people have not changed.” This is just pure race-baiting demagoguery. Over 40 percent of whites helped elect Obama, and those of us who voted against him did so not because he is (half-)black, but because he is a radical leftist – just as we voted against Hillary Clinton for the same reason, and not because of America’s endemic sexism, as she claims.

“Two-thirds of all white guys voted for Trump,” Moore continued. “That means anytime you see three white guys walking at you, down the street towards you, two of them voted for Trump. You need to move over to the other sidewalk because these are not good people that are walking toward you. You should be afraid of them.”
Imagine the apoplectic outrage if a conservative of Moore’s media stature had stated in an interview that blacks who voted for Barack Obama, or Muslim-Americans who voted for Minnesota Congresswoman Ilhan Omar, were bad people and that you should cross the street to avoid being assaulted by them. But because Moore was smearing white (and therefore, presumably conservative) men, his blatant racism received no pushback from the interviewer or condemnation in the left-leaning news media.
Furthermore, Trump supporters are the ones being assaulted in literally hundreds of instances all over the nation, not the ones doing the assaulting. Where is the right-wing equivalent of the fascist thugs of Antifa? Where are the liberals being attacked for wearing “I’m With Her” t-shirts or pussy hats? Where are the Progressives being hounded out of restaurants by cursing mobs? Where are the radical Progressive speakers being threatened and shouted down on college campuses? Moore knows full well that he has it exactly backwards: we should be the ones crossing the street.
Not only does the mainstream media not condemn Moore for such hateful incitement to violence, it promotes his brand of white-bashing while simultaneously providing cover for it by inflating the existential threat of “white supremacists” and claiming they have a friend living in the White House. President Trump, who has unequivocally and publicly denounced racism and white supremacists, and who has done more for American blacks, Hispanics, and Jews in three years than the Democrat Party has done in the last fifty, has not emboldened white supremacists, as the activist media keep insisting.
On the contrary, it is the Trump-hating media themselves who have empowered white supremacists by relentlessly exaggerating their numbers, their degree of organization, and their cultural power and influence. As I’ve written before, white supremacists are the most socially marginalized and politically impotent demographic in America. No politician would dare express public support for white supremacy. No movie or TV show would dare depict white racist characters sympathetically. When South Carolina mass murderer Dylann Roof killed nine black churchgoers in Charleston in 2015, he carried out this atrocity alone because he was unable to recruit any fellow white supremacists to participate. The news media hype racial hate crimes purportedly perpetrated by whites, most notably the Jussie Smollett debacle, but then neglect to follow up on the huge percentage of cases which turn out to be hoaxes. On campuses across the country, entire programs are devoted to indoctrinating students into believing that they are oppressed by an institutionalized web of bigoted evil called “whiteness,” which must be dismantled to make way for racial justice.
This is how white supremacy gets empowered.
None of this is to suggest that white supremacy does not exist; of course it does, and it is an ugliness that should not be tolerated, just as, say, Islamic supremacism should not be tolerated. Bigotry – against people of any color – like the kind in which Democrats regularly traffic, should always be called out and rejected. But contrary to the mainstream media Narrative, and contrary to Moore’s racist fear-mongering, neo-Nazis are not on the verge of establishing a Fourth Reich, and Donald Trump is not their new Hitler.
If Michael Moore were just another celebrity useful idiot like actor Robert De Niro spouting identity politics talking points, he wouldn’t be so noteworthy. But the hypocritical demagogue represents everything that is wrong with today’s Democrats in general. He stands for every radical position held by the leftists who control the Party. A multi-millionaire with numerous homes around the country, he is a loud-and-proud anti-capitalist supporter of the Occupy Wall Street anarchists. He calls himself a patriot but travels the world bashing and apologizing for America to fawning foreign audiences. While claiming to be a lifelong Catholic, he responded to the 2019 Alabama law outlawing abortion by smearing the state as “Talibama” – because protecting the unborn is obviously a human rights atrocity equivalent to Afghanistan Muslims stoning women to death.
Though he travels with heavily-armed guards, he opposes the Second Amendment and demonizes the National Rifle Association as a “terrorist organization” worse than ISIS, claiming that Americans have so many guns because “too many white people are afraid of black people. Period.” An open borders proponent (“There’s plenty of room here” in America, he has said stupidly), he lies about the Trump administration’s immigration policies to stoke further racial animus. Predictably, he is also a climate change hysteric. And although white himself, Moore is, as I’ve noted, one of the left’s most vocal and vicious anti-white racists.
On every issue, to sum up, he is fully onboard with the platforms of the radical left, otherwise known now as the Democrat Party.
A month ago, Moore himself confirmed the point. “I am the center. I am the mainstream now of the Democratic Party,” he told MSNBC, claiming falsely that most Americans agree with his positions. Most Americans do not. More and more Americans are waking up to the fact that Donald Trump is making America great again, and that Democrats like Michael Moore hate him – and his supporters – for that.
From FrontPage Mag, 12/30/19
at 10:59:00 PM