The Solidarity of the Heart 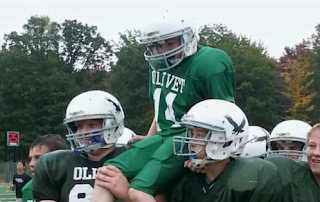 As if the photos last week of Pope Francis comforting a man afflicted with a terrible, painful genetic disorder weren’t heart-tugging enough, a video hit the internet about a touching gesture by a middle school football team in Olivet, Michigan. The two news stories, one international and one local, demonstrate the transforming power of compassion.

The video report featured Keith Orr, a sweet but learning-disabled boy at Olivet Middle School who “struggles with boundaries,” as the reporter says (you can see Keith in the video unself-consciously hugging everyone he encounters). Without their coaches’ knowledge, the football team plotted a special play for him during a recent game.

After intentionally downing the ball at the goal line rather than taking an easy score, the team brought Keith in, hiked the ball to him on the next play, and escorted him in a wedge of blockers into the end zone. Keith scored untouched, and became a football hero at school.
One player told the reporter, “We really wanted to prove that he was part of our team, that he was one of us.” Another, wide receiver Justus Miller, said, “It was just like, to make someone’s day, to make someone’s week, to make them happy.”

But the story didn’t end with Keith’s big moment. It was also about the transformative effect on those who gave Keith that gift. When the reporter asked Miller why Keith’s touchdown made Miller himself so happy, he replied, “Because he’s never been, like, cool or popular,” – at this point Miller gets emotional – “and he went from being pretty much a nobody to making everyone’s day.”

The handsome Miller, who probably is one of the cool and popular kids, tearfully admitted that previously it would never have occurred to him to think about doing that for Keith, but that it changed him: “I went from being somebody who cared mostly about myself and my friends to caring about everyone, trying to make everyone’s day and everyone’s life.”

If I may share a personal story: Many years ago I was having lunch in a fast-food restaurant when I noticed an employee there in his 20s whom I’ll call Jerry. Jerry was clearly mentally and physically handicapped, but was sweeping and cleaning up the dining area harder and more conscientiously than just about anyone I’d ever seen work. I also observed two teenagers giggling and commenting cruelly about him; one even said something to Jerry which clearly upset him.

At that, I got up and asked at the counter to see the manager, who came expecting me to deliver a complaint. Instead, I told him I’d never seen someone work so diligently as his employee, and I wanted to make sure he was recognized for it. The manager smiled and said, yes, Jerry’s an outstanding worker and they were lucky to have him. Did I want to deliver the compliment to Jerry personally? I said I thought it might mean more coming from his boss, and I sat back down.

The manager called him over and moments later I saw Jerry grinning from ear to ear and hustling even harder. He was bursting with pride; the earlier mean remark that had disturbed him was erased.

“Lord, teach us to step outside ourselves,” Pope Francis tweeted a few months ago. Compassion is not pity; it is acting upon our interconnectedness – a solidarity of the heart, as Christians and Buddhists alike call it. That’s what these stories are about: stepping outside ourselves, as Justus Miller learned to do; recognizing the very human needs of the quietly disadvantaged; and showing them, like Keith Orr’s teammate said, that they are one of us.