Jimmy Kimmel and the Tyranny of Feelings 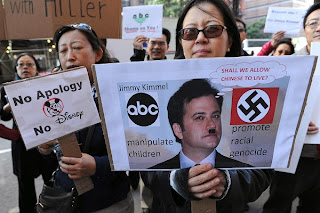 “You know, today is a weird day,” late night TV host Jimmy Kimmel said on Monday’s show. “There seems to be a lot of people upset with me, more upset than usual.” That’s because he is at the center of a growing controversy over a skit back in mid-October that offended Chinese-American groups and sparked a petition with enough signatures on it to warrant a White House response.

The controversy began with a segment satirizing political punditry called “Kids’ Table,” which featured Kimmel moderating a panel of four children, aged 5-6, discussing the hot topics of the day. After getting the kids’ opinions on the recent government shutdown, Kimmel addressed America’s debt problem. He told the child panelists, “America owes China a lot of money, $1.3 trillion. How should we pay them back?”

“Shoot cannons all the way over and kill everyone in China,” one boy immediately joked, prompting Kimmel to chuckle: “Kill everyone in China? OK, that's an interesting idea.” He then posed the mock-serious question, “Should we allow the Chinese to live?” The panel momentarily debated this loudly until Kimmel closed with “Well, this has been an interesting edition of Kids’ Table: The Lord of the Flies edition.”

To any rational adult viewer, this was all in good fun, kids in suits playing at being grownup experts and making comically outrageous pronouncements – sort of like an edgier Kids Say the Darnedest Things. And yet the segment prompted many to raise cries of racism and even comparisons to Nazi Germany’s Jew-hatred. Chinese-American groups protested outside ABC with placards bearing Kimmel’s likeness – adorned with a Hitler mustache. One individual initiated a petition which read, in part, “[Kimmel and ABC management] had a choice not to air this racist program, which promotes racial hatred. The program is totally unacceptable and it must be cut. A sincere apology must be issued. It is extremely distasteful and this is the same rhetoric used in Nazi Germany against Jewish people.”

Actually, it was nowhere near the same rhetoric directed against Jews in Germany, and it did not promote racial hatred. The confusion stems from our abuse of the word racism, accusations of which are hurled these days at the drop of a hat. Even if you took the boy’s outlandish suggestion seriously, it wasn’t racist. He wasn’t advocating the genocide of all people of Chinese descent because they are an inferior race; he was talking about bombing the country of China as a solution to erasing our debt. Over-the-top, to say the least, but not racist. Words and definitions matter, but we are so indoctrinated by political correctness that we take kneejerk offense even at childish nonsense, thus diminishing the damage of legitimate racism, like that of which Nazis were actually guilty.

Nevertheless, the petition garnered over 100,000 online signatures and was presented to WhiteHouse.gov, which is obligated to issue a response to petitions of that size – as if the government doesn’t have more serious issues to tend to. ABC offered an official apology and Kimmel himself said, “I thought it was obvious that I didn't agree with [the kid’s] statement, but apparently it wasn’t. So I just want to say I am sorry. I apologize. It was certainly not my intent to upset anyone.”

Is it really necessary to point out that the panel consisted of 6-year-olds who have no grasp of politics or weighty concepts like national debt or genocide? (Hey, there are plenty of adults who have no grasp of politics; we should be more concerned about them). It is precisely their childlike, uninhibited cluelessness about how to resolve adult problems that makes the skit amusing. Does anyone truly believe that Kimmel and ABC were promoting racial hatred by airing it?

As a culture, we have abandoned all rational sense of perspective and fallen under the heel of what I call the tyranny of feelings, whereby a group (or a person, but usually a group) bullies others by claiming offense and donning the mantle of victimhood, regardless of whether it fits.

Neither Kimmel nor ABC should have apologized for airing the segment because no one should take serious offense at the innocence of kids, much less blow it up into comparisons with Nazism (in fact, rather than banning the skit, we should ban the tactic of resorting to shouting “Nazi” and “Hitler” to demonize those whom we want to silence). The boy’s impulsive crack about wiping out China was not a serious policy recommendation, and Jimmy Kimmel was right to treat it lightly – as we all should.