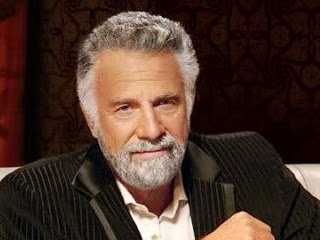 You know him as the Most Interesting Man in the World: the gravel-voiced spokesman for Dos Equis beer, always flanked by beautiful women, who urges you to “stay thirsty, my friends.” His personality is so magnetic, he is unable to carry credit cards. He is the only man to ever ace a Rorschach test. Sharks have a week dedicated to him. Even his enemies list him as their emergency contact number. But at 75, even the most interesting man in the world is concerned about leaving a legacy of service.

Longtime actor Jonathan Goldsmith – not the Latin lover he portrays but a New York Jew – starred in hundreds of roles before snagging the Dos Equis gig which brought him fame. In those commercials, he projects a suave, sex symbol charm in homage to his old friend, actor Fernando Lamas, father of 90s TV heartthrob Lorenzo. (On a side note, Fernando also inspired Billy Crystal’s “Fernando’s Hideaway” skits on Saturday Night Live in the mid-80s, which featured Crystal’s dead-on Lamas impression in catchphrases like “You look mahvelous!” and “It is better to look good than to feel good.”)

But Goldsmith feels compelled to look beyond the success of his iconic character to a more fulfilling and longer-lasting achievement. The actor, who lived for many years on a 47-foot sloop in the Marina del Rey harbor (he and his wife now live in a home in Vermont), spoke in a recent Esquire interview about a growing sense of his own mortality:

I want to leave something behind. I don't want to just be here and leave no handholds for the future, no footprints. It's very, very important to me that the recognition that I have achieved as a so-called celebrity can be used to help others. I'm very involved in charities. I just came back from going to Vietnam for an organization called Clear Path International, which works with a mines advisory group from England. We work with those who have been injured and help them with packages of assistance that will help with their education, with prosthetic limbs, with bereavement benefits.

“I am glad to help in any way I can to bring more attention to their work,” says Goldsmith on the organization’s website.

In other charitable work, he supports the S.A.B.R.E Foundation, whose mission is to protect and preserve the Siberian tiger; the Free Arts for Abused Children, a nonprofit that uses the arts to help abused, homeless or otherwise imperiled youngsters; and the Stella Link Foundation, which drew attention to child sex trafficking.

This impulse to help others isn’t new. In the Esquire piece, Goldsmith relates how in his youth he worked with disabled kids (he believed it would be his life’s work) and the training helped him save a girl’s life:

When I was 18, I started out at the Fresh Air Fund for kids in New York City, and it provided an opportunity for kids with disabilities to do all kinds of activities. One of the things we dealt with were quite a lot of epileptic kids, and when you have to watch 100 kids playing in a pool, thrashing around, it takes a great deal of concentration to determine a child that's having a grand mal fit or a kid that's just playing.

Years later, in Malibu, I watched a little girl play with all the kids, and something caught my eye. I just remember: This kid is going to die. She's drowning. But because I had been trained when I was 18 as a counselor, twenty years before the incident, I knew. I just instinctively reacted.

On another occasion, which sounds as if it’s straight out of one of his commercials, Goldsmith was hiking during a snowstorm (!), found a man stricken with hypothermia, and cared for him overnight until help could arrive.

While his Dos Equis persona is that of a man-about-town and man-of-adventure, Jonathan Goldsmith recognizes that fulfillment for him is less about amassing extraordinary experiences than it is about using that persona to do good for others.