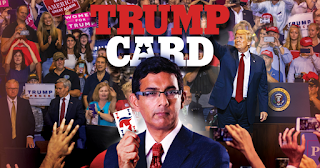 Perhaps the most overarching choice facing American voters in the upcoming presidential election is, which vision of the future do we want to embrace for our country: capitalism or socialism? The choice is just that stark and polarized. In defense of the capitalist worldview, author and documentary filmmaker Dinesh D’Souza recently released his latest film, Trump Card, “to make the moral case for capitalism and show that its rewards are just. We need to show that socialism – even democratic socialism – inevitably leads to misery and tyranny.”

D'Souza, of course, is the New York Times bestselling author of such books as The End of Racism, What’s So Great About America?, and The Big Lie: Exposing the Nazi Roots of the Democratic Left. He is also the filmmaker behind a few of the biggest-selling documentaries of all time, including 2016: Obama’s America, America: Imagine the World Without Her, and Hillary’s America: The Secret History of the Democratic Party. An immigrant from largely socialist India, D’Souza is a passionate speaker in defense of the American Dream and American exceptionalism, two concepts the left has worked hard to discredit. In Trump Card, he comes to their defense again, in the process discrediting the left’s push for the illusory dream of so-called “democratic socialism.”

The documentary includes some animated sequences and dramatic reenactments (of Abraham Lincoln, of the brainwashing of Winston Smith from Orwell’s 1984, and even of D’Souza himself receiving a call from President Trump to pardon D’Souza for his 2014 conviction of making an illegal campaign contribution). It also includes news footage of everything from Antifa violence to Stormy Daniels interviews, and socialist pronouncements from the likes of Rep. Alexandria Ocasio-Cortez and Bernie Sanders. But the most compelling segments feature D’Souza interviewing a wide range of speakers, many of whom the left would consider unlikely conservatives – gay men, blacks, and women – about their war stories of conflict with so-called “liberals” in Hollywood, the media, and the Deep State.

Among those interviewed are gay journalist Andy Ngo, who has literally risked his life to expose Antifa violence while mainstream media figures like CNN blowhard Chris Cuomo defend them; outspoken black conservative actor Isaiah Washington, who stands by his convictions despite Hollywood ostracism; investigative journalist Peter Schweizer, who has done more to expose political corruption than entire mainstream networks; Second Amendment activist Andrew Pollack, whose daughter was murdered in the Parkland mass shooting; and black comedian Terence K. Williams, who left the Democrat plantation because he doesn’t embrace victimhood.

Today’s socialists, D’Souza notes, have united classical socialism with identity politics, fueling division and exclusion. After noting that socialists lure many to their side with promises of free stuff, and through fear-mongering about apocalyptic threats such as “climate change,” D’Souza concedes, “the best thing going for the socialist agenda is the moral anxiety about capitalism. Does capitalism allocate rewards fairly?” In a section titled, “Capitalist Manifesto,” D’Souza looks to the story of Donald Trump’s own entrepreneurial experience to demonstrate that it does; indeed, D’Souza states that “capitalism, not socialism, is the true form of social justice.”

In a segment about what Freedom Center founder David Horowitz has labeled “the unholy alliance” of Islamic fundamentalism and the left, D’Souza talks with Alan Bender about the influence of Middle Eastern Islamists in American politics. Bender, a Kuwait-born Canadian businessman and Muslim who moves in powerful circles in the Middle East, names Somali-born Muslim and Minnesota congresswoman Ilhan Omar as a Trojan horse in America, financed and groomed by Middle Eastern money. He says she is considered the “jewel of their political crown” in America, and that they told her she need not worry about any skeletons in her closet – the media will bury them. “How do they control her?” D’Souza asks Bender. “Her weaknesses: money and sex,” Bender replies. And Islamic governments are making direct payments to mainstream media members to protect her, D’Souza asks? “Correct,” is Bender’s answer.

D’Souza goes on to interview Muslim scholar Mohammad Tawhidi. “What’s the relationship between radical Islam and socialism in America?” D’Souza asks. Tawhidi answers, “Votes and common interests.” He explains that when he was an Islamist, before his political conversion, he voted for the left because “they are very stupid… I know they have no values and principles to begin with. I dare you to find an Islamic extremist who would vote for Donald Trump. They would never do it.”

(Like businessman Bender, Tawhidi too weighs in on Rep. Ilhan Omar, whom he describes as “fundamentalist, extremist, Islamist, jihadi ideology, a threat to national security. ISIS with lipstick.”)

And what region is the blueprint to which socialists always refer as the model for their utopian vision of a democratic socialism? The Scandinavian countries, of course. But D’Souza exposes that those countries are actually market economies, and what socialist policies they have do not take from the rich to give to the poor, but soak the entire society. On the contrary, the countries that serve as the real blueprint for socialists are economic disasters and authoritarian states like Russia and Cuba. Bernie Sanders didn’t honeymoon in Norway; he went to the Soviet Union. When multimillionaire hypocrite and documentary propagandist Michael Moore wanted to promote the wondrous free health care system under socialism, he went not to Sweden but to Cuba, where he focused his camera lens on a hospital reserved for wealthy Cubans and gullible foreigners instead of visiting the filthy, impoverished clinics for the commoners.

D’Souza then speaks with his own wife Debbie, an immigrant from Venezuela, about the collapse of that once-prosperous country into a failed state in which the people were ultimately forced to hunt stray dogs for food, while socialist dictator Hugo Chavez died a billionaire.

In a segment on the Deep State appropriately titled “Thugs with Badges,” D’Souza interviews Catherine Engelbrecht of True the Vote, who was (in)famously harassed for years by an alphabet soup of federal agencies in the Obama administration over fears that her nonprofit organization might police the election process and expose government malfeasance. Engelbrecht was and remains unbowed and defiant in defense of American democracy.

D'Souza moves on to Biden family corruption, nailing the Democratic Party presidential pick Joe and his embarrassment-of-a-son Hunter over their lucrative deals with China and the Ukrainian energy company Burisma. (This film was released, of course, prior to the bombshell report of Hunter’s seized laptop containing damning allegations of Sleepy Joe’s participation in international influence-peddling and multimillion-dollar corruption.)

But, D’Souza notes, “The larger goal of the socialist left isn’t just corruption or economic confiscation. It is to force you into conformity” – starting with the repression of religious freedom. He interviews Kelly Shackleford, president of First Liberty, who states that religious freedom is always the “first flashpoint” of a repressive regime’s attempt to suppress threats to government control. “I have never seen anything like what we’re seeing now,” Shackelford says, with the activist left pursuing, for example, legal assaults on Christian bakers or atheist assaults on Christian crosses on public property.

D’Souza concludes Trump Card with praise for President Trump’s courage and pugnacity in standing up to the radical Democratic Party, which would have steamrolled a lesser Republican leader like Mitt Romney. D’Souza also notes that Abe Lincoln gave his life to fight against slavery; “What price are we willing to pay to protect our American dream against the new form of slavery that is socialism?” he asks. Because if we are courageously willing to pay that price, then “with Trump as our leader, we will leave socialism on the ash heap of history.”