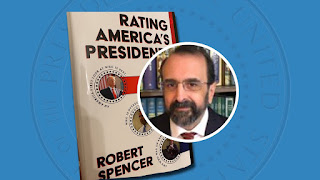 My wife and I homeschool our very young children, and as part of their education we have introduced them to a topic that has tragically diminished in importance in today’s public schools: civics. We’ve taught them a bit about various American presidents (my seven- and ten-year-olds have even memorized all of them in order; I’m lucky to get as far as Andrew Jackson), and occasionally one of the kids will ask about a particular president, “Was he a good president, or a bad one?”

I can easily answer about the most notable ones from my own lifetime like Reagan or Carter offhand, but Zachary Taylor? James Buchanan? William Taft? The answers don’t come so easily. It occurred to me that to keep one step ahead of my kids as time goes on, I must either dive deeper into knowing all the presidents and/or find a handy reference resource about them that I can trust will not reek of Progressive propaganda.

Lo and behold, along comes Robert Spencer’s new book, Rating America’s Presidents, published by Bombardier Books. An unofficial subtitle on the front cover sums up the book’s theme: “An America-first look at who is best, who is overrated, and who was an absolute disaster” – those categories accompanied by photos of Donald Trump, Barack Obama, and Jimmy Carter, respectively. The back cover explicitly assures the reader that this book

rates the presidents not on the basis of criteria developed by socialist internationalist historians, but on their fidelity to the United States Constitution and to the powers, and limits to those powers, of the president as delineated by the Founding Fathers. America’s presidents are rated on the extent to which they put America First – not in the sense of narrow isolationism, but whether they really advanced the interests of the American people.

In short, Rating America’s Presidents “offers what should be the only criteria for rating the occupants of the White House: were they good for America?” After all, as Spencer puts it in his short introduction, “The president’s primary job is clear from the oath of office that every president recites in order to assume office, and it isn’t to provide health care for illegal aliens, or to make sure that Somalia isn’t riven by civil war, or to make sure America is ‘diverse.’” It is to “preserve, protect, and defend the Constitution of the United States.” Spencer also points out that while the cry “America first” has become unfairly associated with xenophobia and white supremacy today, “the Founding Fathers and every president up until Woodrow Wilson took it for granted that the president of the United States should put his nation first and would have thought it strange in the extreme that this idea should even be controversial.”

Spencer adds that “[t]his criterion upends much of the conventional wisdom” of historians’ surveys of the presidents, recent ones of which have put Donald Trump at or near the bottom of the heap and Barack Obama at or near the top, reflecting the priorities and preferences of academics who skew politically left. By the refreshing measure of Rating America’s Presidents, however, Trump ranks “as one of the greatest Presidents the United States has ever had, if not the very best,” even though his first term has not ended yet. Conversely, Obama “is actually the most damaging and disastrous president this nation has ever had.”

Robert Spencer is, of course, well-known to FrontPage Mag readers as the director of the David Horowitz Freedom Center’s Jihad Watch website and the author of a whopping nineteen other books, almost entirely on the topic of Islam. So it might be counterintuitive to think Spencer is qualified to assess all fifty presidents’ accomplishments and shortcomings. But as he notes in the book’s acknowledgements, this “is a topic with which I’ve been fascinated for no less than five decades now.” Additionally, Spencer is a peerless researcher, a clear, compelling writer, and a lover of history and America (the book is dedicated “with love and respect to all Americans who are grateful to live in this extraordinary land”). So while some patriot readers may argue with Spencer’s takes on the presidents, they can at least be confident that they won’t be sucker-punched by the kinds of misinformation or subversive disinformation one too often finds in the judgements of left-leaning historians.

Let’s take two examples whose ratings I’ve already given away: Barack Hussein Obama and Donald John Trump. In Obama’s “Notable accomplishments as president and events of his presidency,” Spencer lists: exacerbating racial and religious tensions; the “apology tours”; covering up Islamic jihad; weaponizing the IRS against political opponents; attacking freedom of speech; and the Iran nuclear deal,” among others. In “Why his presidency was disastrous for America,” Spencer concludes that Obama earned a 0 rating because he “created an institutional culture of denial [about the motivating ideology behind jihadist terrorism] that became deeply imbedded,” to cite one of many other reasons. That having been said, Spencer fairly notes that Obama inherited a mess in Iraq from George W. Bush’s policies.

Trump, on the other hand, was rated a 10 thanks to fighting the deep state, restoring the Supreme Court, cutting regulations and lowering taxes, and withdrawing from the Paris Climate Agreement and the nuclear Iran deal, among other “notable accomplishments.” Why was/is Trump’s presidency great for America, as Spencer judges it? Because when he became president,

internationalism and the steady decline of America was taken for granted. In less than three years, Donald J. Trump, against extraordinary odds, turned that around, and in doing so, became nothing less than one of the greatest presidents in history. After a long string of internationalist mediocrities, the presidency was once again occupied by a man who put America first.

“Americans need to recover an appreciation of their history and the heroes of that history,” Spencer writes. Very true, since our current educational environment prioritizes social justice activism over actual learning, encourages students to feel shame about our history, and teaches them to reject the icons of our past as racist oppressors. Recommended by such notables as Dennis Prager, historian Larry Schweikart (A Patriot’s History of the United States), and former prosecutor Andrew C. McCarthy (The Grand Jihad, Faithless Execution), Robert Spencer’s Rating America’s Presidents is a highly-readable, indispensable, trustworthy tool to educate yourself and younger generations about the leaders of the Free World and how they shaped – or warped – our country.