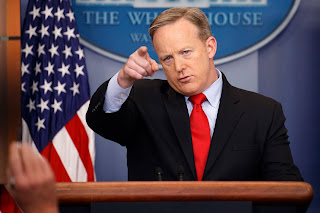 As the revelations of international influence-peddling and multimillion-dollar corruption on the part of Joe Biden and his disgrace of a son go utterly ignored by the Democrat media, and suppressed on social media by Big Tech overlords Twitter and Facebook, it couldn’t be more obvious that the crisis in American journalism has peaked. That makes Sean Spicer’s new book, Leading America: President Trump’s Commitment to People, Patriotism, and Capitalism, all the more relevant and essential.

Former White House Press Secretary and Communications Director Spicer, also the author of the compelling account of his time in the White House titled The Briefing: Politics, the Press, and the President, has written another page-turning, eyewitness account of the volatile intersection of journalism and politics in America today. In ten highly readable, easily digestible chapters, each devoted to an aspect of left’s tightening grip on the culture, the normally calm and collected Spicer absolutely savages the Progressive activists in academia, the news media, and Hollywood. He also argues that re-electing President Trump is America’s only hope to win this “battle for the soul of this great nation.”

David Horowitz, founder of the Freedom Center and bestselling author, most recently, of Blitz: Trump Will Smash the Left and Win, sums it up in his jacket blurb for Leading America:

Sean Spicer has written an indispensable book about the destruction of American journalism by the American left. As an insider who was press secretary to President Trump, is now an anchor on Newsmax TV, and in between was a quarter-finalist among celebrity leftists on Dancing With the Stars, Spicer has written an irresistible insider’s book about the wars that are engulfing us as a nation and threatening our future.

Spicer begins the book setting up the state of the union in 2020 (“Welcome to the current state of American society, one in which all politics is personal and all persons are forced to be political”), and laying out what the stakes are in this critical, upcoming election. What are those stakes? The very principles of our nation, and the Constitution itself, which are threatened by today’s radical Democratic Party: “They will stop at nothing in their attempt to turn capitalism into socialism, patriotism into globalism, and American values into progressive values. They’re willing to run small businesses into economic ruin, turn academic institutions into harmful social experiment centers, use children as political pawns, and ruin America’s favorite pastimes with political polarization – and they’re leaving a nearly unrecognizable country in their wake.”

Then he moves on to a discussion of his wild ride on one of America’s top competition reality shows: “Just as they’ve done with everything else, the left turned a dancing reality show into a political battleground.”

When Spicer was approached about performing on the highly-rated Dancing with the Stars (DWTS) after his White House stint, he gradually realized it not only might be a lot of fun, but by diving into the left-dominated pop culture, it also would be a way to “prove that people from different backgrounds or with different beliefs could get along” – but “many in the media did not want to see that happen.”

Definitely not. The left was outraged that Trump spokesman Spicer would be treated with anything more civil than a public tarring-and-feathering, much less be showcased on one of America’s most popular shows rather than a televised war crimes tribunal. As Spicer threw himself into the gig with abandon – initially in a puffy-sleeved, fluorescent green shirt, no less – and kept surviving the cut each week, his many triggered critics scornfully suggested “that I was trying to redeem myself – or as the New York Times put it, I was wiping away my disgrace through dancing. Unfortunately for them, I was enjoying myself, having fun, and learning something different. I wasn’t asking for forgiveness.”

Spicer concludes that his experience on DWTS “reaffirmed my suspicions about our current state of politics and has opened my eyes to just how vital it is for conservatives to maintain a presence in every sector of society – and that certainly includes TV and entertainment.”

Speaking of which, Spicer then goes on to condemn Hollywood hypocrites for their Progressive activism at the expense of profit and viewers. “Here’s the secret,” he writes, “they are going to do everything they can to ensure that the public is exposed to liberal ideology and will do nothing to showcase anything positive about conservative people, causes, or values. It’s really that simple.” Blasting the left for their intolerant reaction to celebrities of their own like Bill Maher or Ellen DeGeneres, who broke ranks and showed civility to conservatives Milo Yiannopoulos and George W. Bush respectively, Spicer correctly notes that the left “cannot tolerate the mere idea of conservatives and liberals living civilly with one another. It has to be one side winning and stomping out the other.” And we all know which side must be doing the winning and stomping.

Moving on to the “advocate newsrooms” in the legacy media, Spicer criticizes the “head-in-the-sand mentality that has permeated many newsrooms across the country,” noting that “the American people are waking up to their hypocrisy and bias” and that Trump, through his direct Twitter communication with the people, has “disrupted the media landscape” and disempowered the infuriated news outlets: “President Trump has served as both a beacon and a battering ram for the average person in this country who had, for decades, felt like professional talking heads in the media were not reflecting the daily life, concerns, and desires of normal people.”

Spicer lays out the rules of the unspoken team rulebook used by mainstream media outlets and reporters for whom “traditional journalistic standards and ethics don’t apply when it comes to covering President Trump, his administration, and his supporters”: 1) Cover your eyes when it’s our guys; 2) Conflicts of interest are not of interest; 3) Bias through silence; 4) Use our dictionary; 5) Frame and blame; and 6) Change the rules… when politically convenient. Nevertheless, Spicer states, “I take no pleasure in bashing the media. I think it’s a national travesty that we as Americans can no longer rely on such a sacred institution to get our information.”

In his chapters on corporate activism and the “tech tyrants” such as Google, Facebook, and Twitter, Spicer condemns the latter as “an existential threat to our democratic system” and blasts the discredited hate group the Southern Poverty Law Center for “smear[ing] anything or anyone they don’t like.”

He closes the book with three chapters devoted to education, specifically to grade schools (where today, the “three R’s” children are more likely to learn are not “readin’, writin’, and ‘rithmetic” but “racism, refugees, and right-wing bigotry”), the universities (“institutions of higher indoctrination”), and journalism schools, where budding reporters are taught “the fundamentals of journalism through a warped far-left perspective.”

As a prominent lightning rod for the left’s unhinged bile, Spicer declares that he has “experienced firsthand the tactics of the left to control the narrative and drown out voices on the right within every major American institution.” He urges conservatives to realize that now more than ever, we “should unite in an effort to take on the left from all angles at every opportunity… While we should look to build our own shows and platforms, that doesn’t mean we should cede the current ground to the left.” We have to be “willing to get our heads, hearts, and souls in the game” in order to retake territory in the culture war.

In Leading America, Spicer has written a valuable reminder of the values, prosperity, and freedoms we stand to lose in the upcoming election, and what we need to do to get in the fight and preserve them.