‘Caliphate’ - The Series Every Western Feminist Needs to See 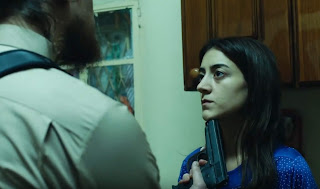 As an act of #Resistance! to the misogynistic dystopia America would surely be plunged into by the election of Donald Trump, the leftist media hyped the 2017 Hulu series The Handmaid’s Tale, in which women are subjugated and dehumanized under a totalitarian patriarchy. “Relevant!” and “Timely!” were the marketing buzzwords used to sell the show to liberal females as an allegory of the horrors they would experience under a Mike Pence-led theocracy. The Handmaid’s Tale became a cultural touchstone for unfulfilled Western feminists whose lives were suddenly given meaning by costuming themselves as handmaids from the show and milling about in protest of their oppression – for example, outside the chambers where Brett Kavanaugh was smeared as a rapist during his Supreme Court confirmation.
The internet series and the original 1985 novel were both set in America, of course, because everyone who has been processed through our Progressive propaganda – er, education system knows that the United States is the historic epicenter of religious intolerance and sexual oppression. Precisely because of this indoctrination, the same feminists who were so inspired by The Handmaid’s Tale are either oblivious to, or intentionally silent about, the real-world suffering of girls and women who are oppressed under an actual totalitarian theocracy outside the West – territories ruled beneath the iron fist of sharia law.
Forget The Handmaid’s Tale – a new Netflix series called Caliphate (Kaliphat in the original) debuted last month which every feminist in the Western world needs to see, not because it will confirm their cultural self-loathing but because it may just open a few eyes to the misogynistic oppression That Must Not Be Named. Produced in Sweden (yes, the same feminist-run Sweden that has all but officially become a Muslim state; how did this show get made?), Caliphate’s storyline centers on Parvin, a Syrian woman desperate to get herself and her baby out of a marriage to a member of the Islamic State. Her only hope for rescue is to spy on her husband and his fellow jihadists, and surreptitiously pass along details of their terrorist plot against a Swedish target to an intelligence agent there named Fatima. Fatima is trying to pull off a balancing act between trusting Parvin, who could just be peddling misinformation, and battling her skeptical superiors, who seem suspiciously resistant to pursuing the lead.
Ostensibly a race-against-the-clock terrorism thriller (and it works very well on that level), the series is more broadly about the real dystopia for women: life under sharia. Not the anti-Trump allegory of The Handmaid’s Tale, but a brutal, oppressive reality that Western multicultural elites either glamorize or ignore altogether. Western women today play at donning hijabs in solidarity with their Muslim sisters, blind to how they are actually betraying their Muslim sisters. Apparel giants like Nike promote Islamic-compliant sportswear as empowering. Fashion designers present Islamic dress as chic and stylish choices – choices women under sharia are not allowed to make (Caliphate makes this clear in more than one scene in which women on the streets of Raqqa, where Parvin lives, are threatened for being improperly covered; in another darkly funny scene, Parvin’s hapless husband Husam is desperately searching for her in the neighborhood but cannot find her because all the women in public have been reduced to the same unidentifiable, black-shrouded shapelessness).

Caliphate dares to depict the precarious lives of real women trapped in (or in some cases, brainwashed into embracing) fundamentalist Islam. In one scene, for example, Husam confesses to another jihadist that his wife has asked to have her own cell phone, which is forbidden. “What do you think I should do?” Husam asks. “You should beat her,” comes the firm reply. When Husam suspects she has been lying to him about a matter which would tarnish his honor, he threatens to kill himself – but promises to kill her and their infant daughter first. In another scene, when Husam suspects that Parvin has been raped by one of his ISIS brothers, his first reaction is not concern for her, but to shun her forever, because of course she has allowed herself to be defiled.
Meanwhile in Sweden, two teen sisters are being radicalized by a smoothly manipulative, seemingly well-assimilated young Muslim named Ibbe who is their teaching assistant – but who is also an integral player in the terrorist plot. He seduces them (and a female friend) away from their more Westernized, non-observant Muslim parents, whom the teens come to view as “infidels” for their rejection of sharia law and their lack of outrage about purported atrocities being carried out against Muslims around the world. Ibbe and a female accomplice draw the girls deeper into the same kind of trap Parvin fell victim to, by promising them a life of Islamic paradise in beautiful, vibrant Raqqa – which is actually a hellhole under ISIS rule.
This subplot of the young girls’ seduction into becoming wives of the most perversely evil men on the planet is arguably more fascinating than the thread of Parvin’s storyline. For one thing, it demonstrates how easy it is to radicalize angry, bored, passionate youth (of all races – in addition to recruiting young Muslim girls, Ibbe is also providing weapons training to a hapless pair of white Swedes) who have already been convinced by Progressive educators that the West is irredeemably racist, sexist, Islamophobic, and imperialistic. Islam seems to offer a just and righteous alternative, and a utopian future in the caliphate for believers – or the glorious path of martyrdom.
“Perhaps this is the most difficult and courageous TV series project that Swedish screenwriters have embarked on,” says Anna Croneman, program director at the Swedish broadcaster SVT. Courageous indeed; Caliphate is the most honest, accurate depiction of terrorist radicalization and women under sharia that I’ve ever seen in a TV series, and I’m including HBO’s Homeland, which disappointingly suffered from the same America-blaming moral equivalence that has burdened all but a very few Hollywood productions about Islamic terrorism since the 9/11 attacks. Caliphate refuses to straddle that fence.
Despite the fact that the show is on Netflix, which countless conservatives have already abandoned due to its well-known leftist tilt, Caliphate is must-see TV. Originally produced in Swedish, Arabic, and English, you can watch it with subtitles, but I also was pleasantly surprised to find that the English-dubbed version was excellently done and not at all distracting, as amateurly-dubbed programs notoriously are. Whatever it takes, find a way to view it – and recommend it to anyone you know who thought The Handmaid’s Tale was “Relevant!” and “Timely!”
From FrontPage Mag, 4/5/20
at 6:50:00 PM