A World Without God 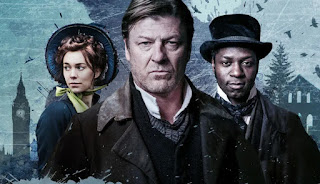 With few exceptions, the overwhelmingly secular filmmakers in Hollywood don’t present Christianity in a favorable, or even a balanced, light. Characters who are overtly Christian are almost always caricatures if not the bad guys: fanatical fundamentalists, over-the-top hypocrites, sexually perverse, outright evil, or a combination thereof. The British leftist propaganda network, the BBC, is typically just as bigoted in this respect as Hollywood, which makes its series The Frankenstein Chronicles all the more stunning as a pro-life, cautionary tale of a world without God.
The Frankenstein Chronicles is a two-season BBC series (six episodes in each) from 2015-17, available on Netflix. It stars Sean Bean, who is well-known from dozens of films and TV shows such as The Lord of the Rings, Game of Thrones, and the James Bond film Goldeneye (Bean reportedly was once considered for the role of Bond). Set in 1820’s London, the series follows Bean, looking even more grizzled than usual here, as war veteran and river detective John Marlott. He is tasked with investigating a monstrous crime: the body of a young girl has been recovered from the Thames, and Marlott learns that her corpse actually consists of the parts of eight different children, stitched together into a single body. Someone is kidnapping and murdering street urchins, then performing unholy experiments on them. But for what purpose?
The show reflects a real-life, early 19th-century surge of interest in anatomy thanks to an increase in the importance of surgery. At this time, only the corpses of executed murderers could legally be used for dissection. But the rise of medical science and a reduction in executions meant that an underground trade in grave robbing began to flourish. The trade was conducted by so-called “resurrectionists,” who robbed graves to sell corpses for medical study. An Anatomy Act was proposed which would ensure that anyone practicing anatomy had to obtain a license from the Home Secretary. It gave physicians, surgeons, and students legal access to corpses unclaimed after death – in particular, those who had died in hospitals, prisons, and workhouses – which would end the work of the despised resurrectionists but meant that the bodies of society’s downtrodden would be denied dignity and become fodder for medical experiments.
Marlott is a working-class stiff whose soul has been ravaged by the drowning death of his young daughter and his wife’s subsequent suicide – and if you’re familiar with Sean Bean’s work, you know that there is literally no actor alive whose face more convincingly conveys a world-weariness and torturous guilt. Troubled by dreams and hallucinations in which he sees, but cannot reunite with, his deceased family, and disturbed by the prospect that children are being victimized by “a monster with a human face,” Marlott begins to obsess over the case, which leads him deeper and deeper into a tangled political web, and dangerously close to the darkest evil.
The trail leads Marlott to Lord Daniel Hervey, the proprietor of a private charity hospital. Hervey and his sister Lady Jemima are both fervently opposed to the pending passage of the Anatomy Act, which would shut down Hervey’s practice. Lady Jemima implores Marlott to help. She recognizes in him a fellow Christian and expresses her concern to him that the Act could lead to denying the common folk their holy body to stay intact, disqualifying them for resurrection on Judgment Day. “If we deny Christ the poor, Mr. Marlott,” she asked, “don’t we deny him for ourselves? And that’s what’s at stake here – not merely the future of medicine, but the prospect of a world without God” – a theme explicitly stated on more than one occasion throughout the series.

Marlott gradually deduces that some skilled surgeon is attempting to give life to the corpses to arrogate to himself the ultimate power: the power to overcome death. Suspecting there is a connection between the murders and the popular but shocking novel Frankenstein, or the Modern Prometheus, Marlott questions the book’s author Mary Shelley, whom he also suspects is involved. She explains to him the significance of the Prometheus legend: “He stole fire from the Gods and molded from human clay, like my Victor [Frankenstein]. A symbol of rebellion. For all of us who oppose tyranny and oppression.”
“Tyranny and oppression? Or the laws of God?” Marlott counters.
“What would we not do to defeat death, Mr. Marlott?” Shelley challenges. “Might we not defy God’s laws, in order to be reunited with those we love?” – a message that hits too close to home for the bereaved Marlott.
An increasingly determined Marlott pursues the truth until at last he confronts the monster with a human face – and his most successful experiment. When Marlott tells the villain’s protégé that they will answer to God for their perversion, the latter justifies it by summing up the show’s theme again – replying that there is no God, and where there is no God, “anything is possible.” In his mind, no God means that the possibilities for humanity are freeing and limitless; but the show’s message is clearly meant to be that the absence of God means the possibilities for plumbing the depths of evil are limitless. In that respect, the show also addresses the topic of abortion (which of course was illegal at the time) and takes a surprisingly pro-life stance.
Actual historical characters who make appearances in the series include the aforementioned novelist Mary Shelley; the mystic poet and artist William Blake, whose occult paintings offer clues to a missing child; Home Secretary Sir Robert Peel, considered the father of modern British policing; and a young, muckraking journalist named Charles Dickens (under his pseudonym “Boz”). Romantic poet Lord Byron’s daughter Ada Lovelace, who is sometimes acknowledged as one of the first computer programmers for her work with inventor Charles Babbage, also plays a creepy role in the second season.
With unusual exceptions, I’m not a fan of the horror genre. I would recommend a horror movie or show only if it was intelligently written, well-told (including in terms of its production values), and presented thought-provoking ideas and/or moral insights. The Frankenstein Chronicles fulfills all of this. While all the acting in The Frankenstein Chronicles is outstanding, the underrated Sean Bean is extraordinary as Marlott, particularly at one jaw-dropping plot twist halfway through the series. Be forewarned though that the show is grim, occasionally gruesome, and haunting, but is less about the standard tropes of horror flicks than it is about the depraved depths to which people with no moral limits will sink in the course of usurping the power of God. In the face of this evil, it offers hope.
In an age in which the numbers of believers are reportedly in decline; in which Christians are the most persecuted believers in the world; in which secular elites relentlessly push the false notions that science and religion are incompatible and that Christians are “anti-science,” The Frankenstein Chronicles offers a refreshing condemnation of the arrogance and lust for divine power that have characterized humanity ever since Adam and Eve were seduced by the serpent’s promise that “ye shall be as gods.”
From FrontPage Mag, 4/29/20
at 6:48:00 PM