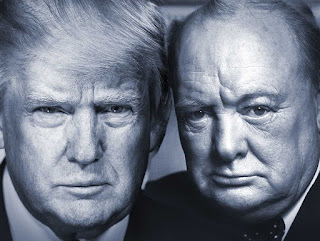 I’m a firm subscriber to the “Great Man” theory of history, which posits that the course of history largely (but not entirely) has been determined, for better or worse, by the decisive impact of individuals of unique vision and indomitable will. What would the world look like had Alexander the Great, for example, never been born? Or Jesus Christ? Or George Washington? Or Adolph Hitler, for that matter? Fortunately for the world, Hitler’s impact was checked by the timely emergence of another towering figure who validates the Great Man theory: Winston Churchill.

If you’ve ever seen my friend Nick Adams speak in person or in the news media, you know that one would be hard-pressed to find a more enthusiastic cheerleader for America – especially considering that he’s from Australia (he describes himself as an American trapped in an Australian body). A legal immigrant, Nick is genuinely so grateful and excited to be an American that he founded FLAG, the Foundation for Liberty and American Greatness, a non-profit organization dedicated to educating Americans about the values and principles that make our nation exceptional. Toward this end, FLAG promotes civics education to K-12 students across the country.

Nick has also written a number of books extolling and defending American virtues, including Green Card Warrior: My Quest for Legal Immigration in an Illegals' System, Class Dismissed: Why College Isn’t the Answer, and Retaking America: Crushing Political Correctness. His latest book, available May 19, is Trump and Churchill: Defenders of Western Civilization – “part historical, part rallying cry, part sociological analysis,” as he puts it. In it, Nick examines the former British Prime Minister and America’s 45th President through a combination of ten qualities crucial to their greatness, each of which is assigned its own short chapter: genius, patriotism, prescience, instinct, defiance, pugnacity, and ebullience, among others. He asserts that the mix of these qualities enabled Churchill and Trump to rise above adversity, controversy, and overwhelming opposition both without and within their own governments to become the saviors of Western civilization and its values at moments in history when the West was challenged by perilous threats, and he predicts that Trump will surpass even Churchill in terms of his historical significance for our way of life.
How does Adams see these men as defenders of the West? “I want to make clear,” he writes,

that one of the first victories for each man was that he stemmed the tide; he defended Western civilization first by halting the expansion of anti-Western, anti-freedom ideals, and then by moving the ball back in the other direction. Trump himself is not going to fully restore all respect for free speech, police officers, or the rule of law. But he is first stopping the damage wrought by Obama and then reversing the damage by restoring respect to these institutions and ideals. Similarly, while Churchill helped stop Adolf Hitler and Joseph Stalin, he himself could not completely stop the ideology that had infected the people in their countries, as some of that sadly still lives on today. He was able to halt their harm and make progress toward undoing their damage.
Trump, more specifically,
has helped defend Western civilization by promoting true equality, by helping move the country toward better opportunities for all Americans, including Hispanics and African Americans, and especially those in poorer areas who are often ignored by leftist politicians except when campaign season comes around. In this way, Trump has defended Western civilization by helping unify the country around the shared goal of a stronger economy.
“Both Churchill and Trump had the weight of civilization on their shoulders, but they never once shrugged,” Adams continues. “Instead, like the great leaders they were, Churchill and Trump soldiered on with ebullience, projecting an optimism to the people they were leading as well as their enemies, who surely thought they would be demoralized.”
In addition to sharing many qualities crucial to greatness, both men, Adams writes, “recognized the importance of free enterprise, the rule of law, limited government, religious freedom, and the freedom of speech.” Both “took over from weak predecessors” who had left their countries on the brink of crisis, and “both men at different times had to upend traditional ‘wisdom.’” Like Churchill, Trump is known for working obsessively long hours. Also like Churchill, Adams writes, Trump is a flawed man who is nevertheless putting everything of himself on the line for the defense of the country he loves and the Western values he cherishes.
Pointing out that Trump is an admirer of the British leader, Adams notes that, “one of the first acts that Trump took as president was to bring the bust of Winston Churchill back into the Oval Office” after his predecessor Barack Obama shamefully and insultingly returned the gift to England when he took office. Adams goes on to claim he feels certain that Churchill, were he alive today, would be an admirer of Trump as well, partly because he too was “despised by the elites and the resistance of his day” but his “decisions and philosophy were, by and large, proven correct.”
In addition to quoting liberally from Trump and Churchill throughout the book, Adams includes fifty pages of rousing speeches from both men in which they defend the values of Western civilization: Churchill’s 1938 speech about the Munich agreement before the House of Commons, his 1938 Chancellor’s address on civilization at Bristol University, and his 1918 Liberty Day Meeting speech at Westminster; and Trump’s inaugural address, his 2017 speech in Warsaw, and his February 2019 State of the Union address.
Adams concludes the very readable Trump and Churchill by reaffirming his prediction that “President Donald Trump is going to be a greater defender of Western civilization than Prime Minister Winston Churchill.” That will be left to the judgment of history, of course, but considering the existential threats the Western world is facing – a growing favorability toward socialism among our youth, the subversion of cultural Marxism, leftist totalitarianism, Islamic fundamentalism, and open-borders globalism – if Trump can lead a turn of the tide and Make Western Civilization Great Again, then Nick Adams will be proven right.
From FrontPage Mag, 4/23/20
at 6:46:00 PM