How to Educate an American 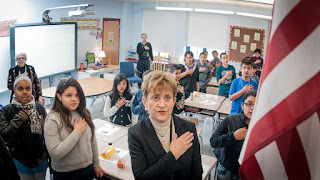 Like a growing number of American families, my wife and I homeschool our young children. Why? A number of reasons, primarily the fact that studies show homeschooled kids are better-educated, better-socialized, and better-behaved than public schoolchildren. But our initial motivation was the conviction that the current American educational system is hopelessly broken, from pre-K all the way through college graduation. As every conservative knows, the leftist death grip on our schools has largely replaced education with indoctrination.
But we are fortunate; not every concerned family is in a position to homeschool, and simply abandoning our public schools to their ugly, Progressive fate is a surrender, not a solution. How then, do we reclaim American education so that all our children can be put back on track to a more prosperous, civically literate, empowered future? That is the theme of an important new book from Templeton Press titled, How to Educate an American: The Conservative Vision For Tomorrow’s Schools, a collection of essays from over twenty stellar contributors ranging from William J. Bennett and Mona Charen to Heather Mac Donald and Arthur C. Brooks, edited by Michael J. Petrilli and Chester E. Finn, Jr.
Petrilli is president of the Thomas B. Fordham Institute, a research fellow at Stanford University's Hoover Institution, executive editor of Education Next, and a Distinguished Senior Fellow for the Education Commission of the States. Finn is Distinguished Senior Fellow and President Emeritus of the Fordham Institute and a Senior Fellow at Stanford's Hoover Institution. In other words, they know this field, and for this volume they sought out, not fellow policy wonks, but “big thinkers – public intellectuals and scholars whose work includes education but doesn’t focus on policy prescriptions.” This makes for a highly readable and more wide-ranging collection of creative answers to the questions of where America is headed and the role education should play in getting us there.
In their conclusion, Petrilli and Finn argue that three aspects of education should be emphasized in the years to come: preparing young people for informed citizenship; restoring character, virtue, and morality at the head of the education table; and fashioning an education system that confers dignity, respect, and opportunity upon every youngster, including those who don’t go to college: “Supplying knowledge. Forging citizens. Forming strong character. Bestowing dignity.”
These aims inform the structure of How to Educate an American, the essays of which are grouped into four sections of overarching themes: Part 1 is “History, Civics, and Citizenship”; Part 2 covers “Character, Purpose, and Striving”; Part 3 focuses on “Schools, Families, and Society”; and Part 4 finishes with “Renewing the Conservative Education Agenda.” Below are some, but not all, of the highlights of each section.
In “Irradiating the Past,” National Review’s Jonah Goldberg leads off Part 1 with a complaint that, “[i]nstead of telling how we have struggled to embody our principles” in the story of America, “we now teach the illegitimacy of the principles themselves.” He concludes: “A decent, patriotic, and most important, honest education system would not belittle past sins. It would teach these sins to students – future citizens – to show that, while there is always more work to do toward our ideals, those ideals generate our progress and prosperity.” In the same section, Princeton Professor of Jurisprudence Robert George addresses what causes – and what might cure – illiberalism and groupthink, and open up young minds to different viewpoints.

Peter Wehner of the Ethics and Public Policy Center notes in Part 2 that “[f]rom the beginning, character education was a fundamental part of the mission of American education; to disregard the former was to deracinate the latter. Or so it was widely thought, until right around a half-century ago” – when the left’s mission to subvert education took hold. Wehner argues, “We can’t will the end – citizens of good character – without willing the means to the end: inculcating virtue in the young through moral precept, through example and habit, through rewards and punishment, through conversations and stories.” This is an urgent aspect of a conservative revival of American education.
Also in Part 2, Hoover Institute Fellow William Damon examines the necessity for “Restoring Purpose and Patriotism to American education,” and the brilliant Heather Mac Donald, contributing editor at City-Journal and author of The Diversity Delusion, demonstrates in “Race, Discipline, and Education” that the transmission of knowledge and culture cannot be successful at all in a classroom setting disrupted by violence and disorder. Students must first learn to “civilize themselves.”
In Part 3, the book centers on family and society. Manhattan Institute Fellow Kay Hymowitz complains, “Growing up in a multiracial, multiethnic environment, American students already share fewer commonalities than those from more homogeneous nations. Instead of recognizing this danger, educators have all but abandoned the mission of creating an e pluribus unum, of instilling a sense of common history and culture.” She argues that “kids with strong families and social networks” are necessary in order to “counter the fragmentation, disintegrating trust, and loneliness of contemporary American education – and life.”
Columnist and political analyst Mona Charen writes in “You Can’t Argue With Success – Or Can You?” that our key challenge is promoting to our youth the proven “success sequence”: 1. Finish high school. 2. Get a full-time job. 3. Wait until 21 to marry and have children. For too long, that notion has been a lightning rod of controversy in the culture war, because to suggest that the social ills of minorities might in any way be blamed on the failure to follow this sequence is deemed racist. Charen nonetheless concludes that education, work, and family “are the indispensable building blocks not just of financial success but of health and happiness. Young people from homes and neighborhoods that don’t convey this reality deserve to hear it from someone.”
In Part 4, “Renewing the Conservative Education Agenda,” the American Enterprise Institute’s Yuval Levin points out that “left and right begin from different assumptions about the human person and society,” and that the right must be willing to “fan the flames of the culture wars” to change the basic understanding of the purpose of primary and secondary education. “In the coming years,” he writes, “conservatives will need to find appealing, responsible ways to return to our roots and remind ourselves and the country of just what children need from schooling, and what an ideal of education more thoroughly rooted in an ideal of human flourishing could have to offer.”
In the closing essay, Reagan’s Secretary of Education William Bennett calls for “Rebuilding a Conservative Consensus” centered on “The Three C’s” that he proposed decades ago: content, character, and choice. “So is a good school, a great school, a great set of schools, even a great state of schools possible in America?” he asks. “Yes, it is possible because once it was actual. And we see real possibilities of sound educational actuality developing in states today.”
Many decades ago the radical left shrewdly decided to exchange marching in the streets for the much more effective method of infiltrating education in order to steer the hearts and minds of our children into alignment with a Progressive vision. That’s why we find ourselves where we are: with a dumbed-down young electorate that favors socialism, despises America, clings to groupthink, and violently suppresses conservative dissent. It is time, as editors Petrilli and Finn argue, for us to re-engage, to liberate our children – and indeed, our country – from this cultural and intellectual bondage and to pursue what Bennett calls “a great relearning.” How to Educate an American points the way.
From FrontPage Mag, 2/25/20
at 11:30:00 PM