Does Character Matter Anymore in Politics? 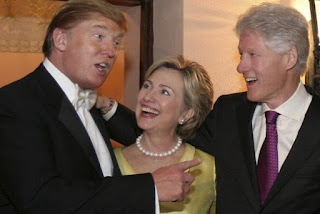 The 2016 presidential election seems headed toward a showdown between the two least-liked presidential candidates since American voters have been polled on the question – and with good reason. One is a vindictive, politically ruthless, unrepentant liar; the other is an egomaniacal, boorish, bullying braggart. Neither one even bothers to pay lip service to the values of honesty, integrity, humility, and moral courage, and yet somehow this distasteful duo has emerged from the campaign battle royal as the presumptive party nominees.
What does this say about personal character in American politics today? Does character in politics matter any longer, or are principles now just hindrances to winning elections? After Nixon and Watergate, and certainly after the scandals of Hillary Clinton’s husband Bill in the 1990s, are we cynically resigned to a political culture that dismisses moral exemplars as suckers and losers instead of role models and leaders?
This isn’t an entirely new development. History is littered with examples of leaders of dubious character or worse. Many people enter the political arena with a genuine commitment to civil service or a passion to change the world, but politics has always attracted a disproportionate share of scoundrels with a bottomless lust for power and self-aggrandizement. The difference is that now we seem to be accepting, if not actually embracing, the latter.

Some insist, fairly, that the very survival of our nation as we know it is at stake in this election. They argue that survival is more important than clinging to principle and going down with the ship, like the Edwardian gentlemen on the Titanic who gave up their lifeboat seats to women and children out of a suicidal sense of chivalry.
And thus if a candidate promises victory and policies that are in the best interests of the country, is it even necessary to care about his or her character? Twenty years ago Bill Clinton’s supporters argued that it was provincial and sanctimonious to complain about his extramarital sexual dalliances as long as he was at the helm of a strong economy. They defended Clinton by asserting that Americans needed to quit moralizing, adopt a European sophistication about the private sex lives of our leaders, and let them get on with their job.
In his 1998 book The Death of Outrage, published even as the Clinton-Lewinsky scandal was still being investigated, traditionalist pundit William Bennett systematically demolished this argument and every other defense of Clinton’s betrayal of the public trust, arguing that it constituted an “assault on American ideals.” Clinton’s behavior degraded public values and defined presidential leadership downward, Bennett wrote, leaving us with a culture that no longer occupies any moral high ground:
Civilized society must give public affirmation to principles and standards, categorical norms, notions of right and wrong. Even though public figures often fall short of these standards – and we know and we expect they will – it is nevertheless crucial that we pay tribute to them.
Why is it crucial? Because as Bennett put it, morality is not some mere abstraction. Unethical behavior has very real consequences for us as individuals and as a society. If we allow our leaders to adopt Machiavelli or Boss Tweed as their political guide, we will all be dragged down. If, out of moral cowardice or political expediency or simple cynicism, we are indifferent to a lack of character in our own President, then we are dooming ourselves and certainly our children to a more degraded world.
Our policies must be grounded not in expediency or ideology but in morality. Our nation’s leader, our Commander-in-Chief, is America’s representative. What example are we setting for our citizens, for our children, for the rest of the world, if we don’t elect a Leader of the Free World who embodies the character qualities we claim to admire, but instead choose a strongman or corrupt liar indistinguishable from tin-pot tyrants elsewhere?
No one expects perfection from any candidate. We are all flawed human beings. None of us could survive the sort of relentless media scrutiny applied to most presidential candidates without embarrassing revelations or worse coming to light. But that is no excuse for minimizing or rejecting the importance of character altogether. We expect the highest professionalism and morality from our police officers, judges, doctors, teachers, etc., and we are rightly judgmental of those authority figures when they are guilty of moral failure. Why should we not hold our political leaders, particularly the person we elect to the highest office in the land, to those same ethical standards?
I am reminded of a scene from Robert Bolt’s brilliant play A Man for All Seasons, in which St. Thomas More ridicules those of shifting moral benchmarks. “You see,” More declares, “we speak of being anchored to our principles. But if the weather turns nasty you up with an anchor and let it down where there’s less wind, and the fishing’s better. And ‘Look,’ we say, ‘look, I’m anchored! To my principles!’”
If we do not hold our ground when our principles are tested, then by definition we are not principled. Anytime we choose to set our principles aside in order to buy time or survival, we are making a deal with the Devil, and what will we do when the payment becomes due? To paraphrase another line from More in Bolt’s play, when the Devil turns round on us, with our principles gone, what will we have to protect us? Do we really believe we would be able to “stand upright in the winds that would blow then?”
From Acculturated, 7/6/16
at 1:31:00 AM